The Renosterveld of South Africa’s Overberg characterises this unique and extraordinary region at the southern tip of the African continent. At a distance it can appear a soft grey, the colour of renosterbos (Elytropappus rhinocerotis), which is one of the dominant shrubs in this vegetation.

Few realise that Overberg Renosterveld is, in fact, one of the world’s most species diverse mediterranean-type shrublands. In recognition of its ecological complexity and variation in underlying geology, the Renosterveld of the Overberg is classified into four different vegetation types. 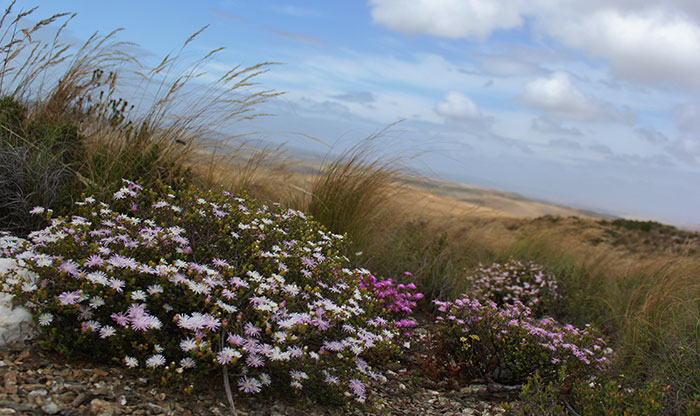 In this edition of our blog, we take a closer look at the vegetation types that comprise the Overberg Renosterveld.

The classification presented here is according to South Africa’s national vegetation map and the ‘Field Guide to Renosterveld of the Overberg’, of which our founder and director Dr. Odette Curtis-Scott is one of the co-authors.

The Western Rûens Shale Renosterveld is found on shale geology in the western parts of the Overberg Rûens, an area of gently undulating plains from around the towns of Botrivier and Villiersdorp, eastwards to the Caledon Swartberg, Napier and Genadendal.

Western Rûens Shale Renosterveld grows on shale geology, with clay and loam soils derived from rocks from the Bokkeveld Group, particularly the Ceres Subgroup. This vegetation type receives predominantly winter rainfall. On average, there is higher rainfall here than for the vegetation types which occur further east.

One of the main differentiating features between Western Rûens Shale Renosterveld and the other Renosterveld types that are found in the Rûens is the absence of Vachellia karoo (syn. Acacia karoo) and Aloe ferox, as well as a higher grass component.

Notable endemic and near endemic species found in this vegetation include flamboyant bulbs including Aristea biflora, Aristea teretifolia, Moraea comptonii and Moraea insolens. Beautiful shrubs that are endemic or near-endemic include Freylinia helmei, Aspalathus rosea and many others. 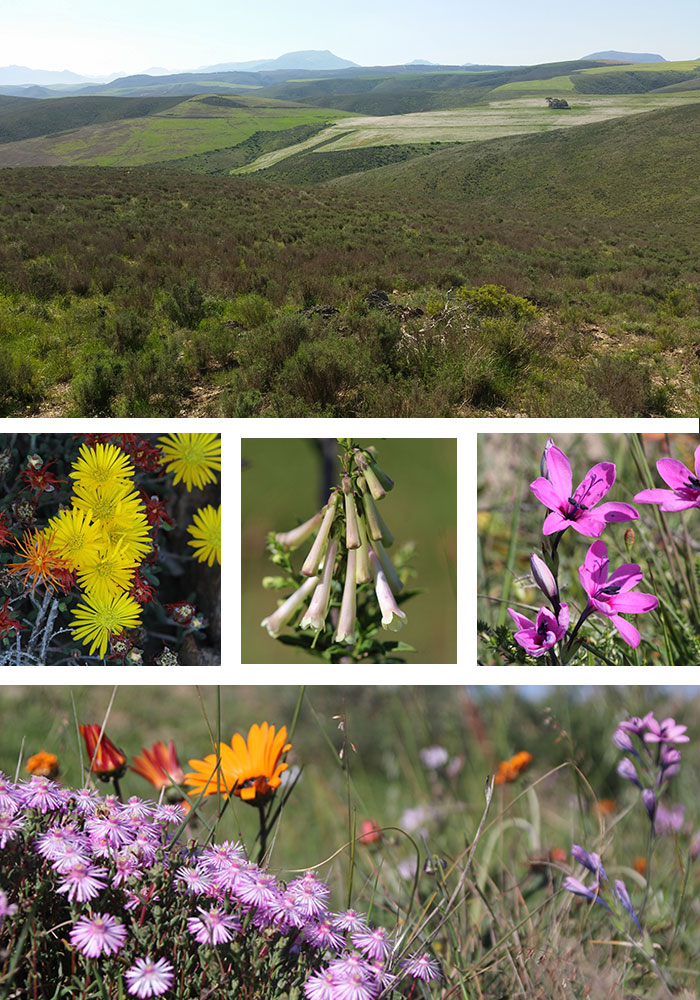 Moving further east, we find the Central Rûens Shale Renosterveld, which is found between the towns of Greyton and Stormsvlei and southwards to Napier and Bredasdorp. There are also outliers of this vegetation on the southern reaches of the Agulhas Plain.

Endemic and near-endemic plant species that characterise this vegetation type include Polhillia canescens, an attractive yellow-flowered shrub from the pea family (Fabaceae) and the bulbs Gladiolus subcaeruleus and Romulea pilosa. 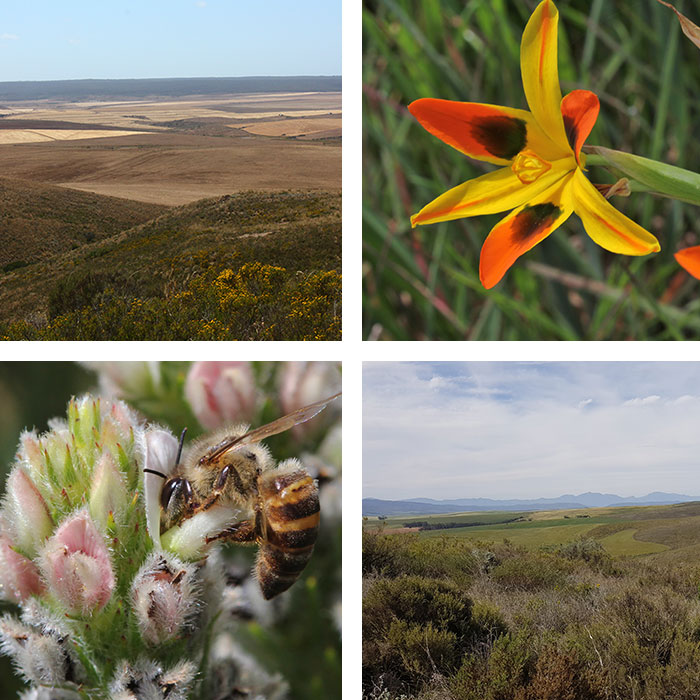 Eastern Rûens Shale Renosterveld is distributed from Bredasdorp eastwards towards Swellendam, Malgas, Heidelberg and Riversdale, where it is also found on shale geology from the Bokkeveld Supergroup.

Eastern Rûens Shale Renosterveld has a far less pronounced winter rainfall peak in comparison with other Renosterveld vegetation types in the Overberg, receiving the majority of its rainfall during autumn and late spring.

Thicket vegetation elements form part of this vegetation, such as Euclea undulata and Carissa bispinosa, which are often found growing along drainage lines. Patches and outcrops of white quartz also occur overlying the shale. These quartz patches are home to their own unique suite of endemic species, many of which are now highly threatened. 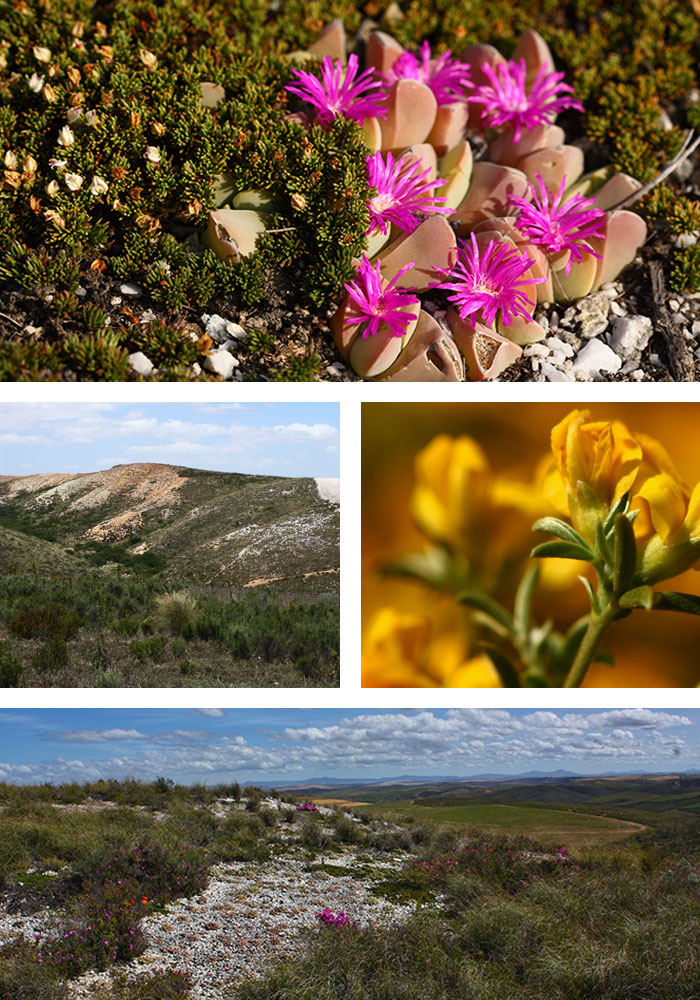 The current description and range of this vegetation type also includes some larger remnants of gravel terrace, characterised by large, round river stones, located along the lower Breede River.

Recent investigations by our geologist friend, Dr. Yoav Eytam, show that these remnants are quite different, being based on sandstone, quartz and quartzite geology and not silcrete (see Dr. Eytam’s incredible website here). The ORCT is discussing the implications of this for the naming of this vegetation type with Dr. Eytam. 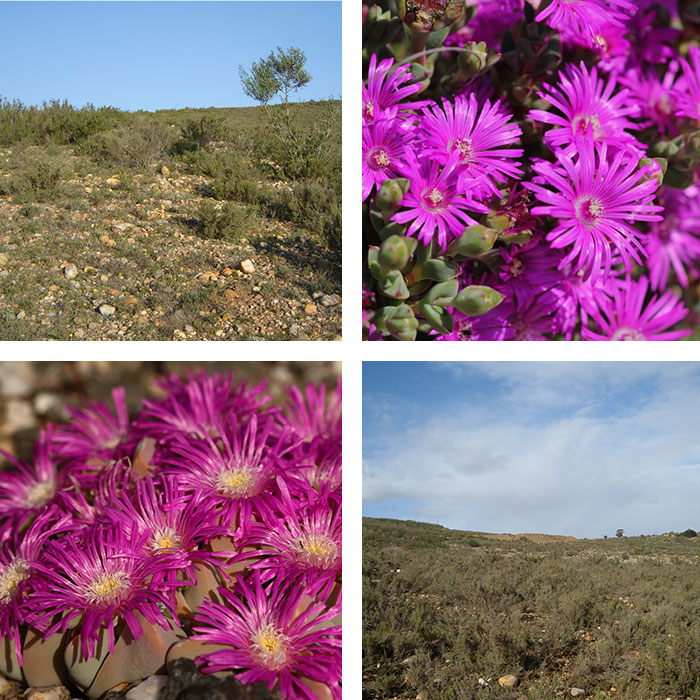 Rûens Silcrete Renosterveld is climatically similar to Eastern Rûens Shale Renosterveld. It is characterised by shallow soils on top of pink and orange shales, capped by large round quartzite rocks on the soil surface.

Rûens Silcrete Renosterveld is home to several endemic or near endemic species. Examples include the summer flowering bulb Cyrtanthus leptosiphon and the succulent Mesembryanthemum napierense.