You are here: Home / Our Team

The Overberg Renosterveld Conservation Trust consists of a small team of passionate and highly qualified people working to conserve the remaining fragments of Renosterveld in the Overberg. The ORCT is governed by a small Board of Trustees and run on a day-to-day basis by the Director of the Trust.

Dirk van Papendorp - Chairperson of the board

Dirk holds a BSc (1986) and Honours (1989) degree in Agriculture. He is a successful commercial farmer in the Heidelberg region (eastern Overberg) and own two adjacent farms: Voorstekop (his family farm) and Uitvlugt. Voorstekop was awarded the National Veld Trust Award owing to the care Dirk and his father took of the entire environment on the farm. Over the years, various botanists have visited Dirk’s farm and through this he became exposed to a whole new world of rare and special organisms growing on his land – something that completely changed the way he saw his Renosterveld.

Dirk has now registered the Renosterveld and Lowland Fynbos habitats on his farm (±500 ha) as a Nature Reserve (Voorstekop Eco-Reserve) through a Stewardship contract with CapeNature. Originally inspired by his father’s passion for the natural environment, Dirk is a forward-thinking individual who is serious about conservation (no till) farming and the protection of biodiversity. Dirk feels strongly that farming today needs to take all aspects of the farm into consideration and that managing for biodiversity is as important as managing for successful crops and commercial gain.

“I also believe that the nature-based tourism in the Cape Floristic Region’s unique habitats is under-exploited and that this is one of the most important keys to saving rare habitats on privately-owned land.”

Lesley has a BSc in Dietetics (1975, University of KZN), an Honours in Community Health (1984, UCT) and an MSc in Epidemiology (1990, Univ Stellenbosch). She first worked in the field of community health and nutrition for 15 years in both government and non-government organisations. In 1992 she moved into the conservation sector, joining CapeNature for 2 years and thereafter WWF South Africa to promote sustainability through programmes which integrated human health, community development and the conservation of natural resources.

She has a solid base in management, programme planning and implementation, communication and fundraising, the latter both locally and internationally. A WWF College course in Conservation Leadership completed in December 2001 provided her with a wide set of skills in areas that are increasingly important in conservation such as conflict resolution, negotiation and campaigning. In 2003 she joined Flower Valley Conservation Trust as the Executive Director and has headed up the Trust for the past 9 years to develop it into a catalytic and innovative organisation in the Fynbos conservation and development sector.

Sean (MSc Botany, UCT) is a botanist, Director of the Grootbos Foundation, Founder and Chairman of the Walker Bay Fynbos Conservancy and a Trustee of the Flower Valley Conservation Trust. Sean has 15 years of experience working in practical conservation implementation and sustainable livelihoods development on the Agulhas Plain. He runs the Green Futures Horticulture and Life Skills College, as well as Growing the Future sustainable agriculture projects at Grootbos Nature Reserve.

He is also an eco-tourism operator; a botanical and conservation consultant, specialising in botanical surveys and management plans in the Overberg; and a Fynbos restoration specialist. Sean has written the definitive guide to the flora of the Walker Bay region and is also a consultant to Fauna and Flora International in the Cape. Sean brings experience in biodiversity based business, NGO governance and livelihoods development to the ORCT.

Prof Muthama Muasya holds a BSc in Botany & Zoology (Moi University, 1992), an M.Phil. in Plant Taxonomy (Moi University, 1993) and a PhD in Systematics (University of Reading, 1998). He has extensive postdoctoral experience in England (Royal Botanic Gardens Kew), USA (Rutgers University) and Belgium (KU Leuven) as well as research experience at the National Museums of Kenya. Since 2006 he has held an academic position at UCT, with research focus on the cosmopolitan plant family Cyperaceae, as well as other aspects of the Cape and African Flora. He is an NRF-rated researcher, has published over 100 scientific outputs (journal papers, conference proceedings, book chapters), successfully supervised postgraduate students and regularly examines theses, and has served in national and international committees and panels. He is currently a member of the Fernkloof Nature Reserve Advisory Board. He has wide experience, networks and good standing within the biodiversity research and conservation fraternity.

Christina was born and bred in the Overberg and has lived here most of her life. She and her husband, Billy, farm on a 4th generation family grain and sheep farm where she grew up. Here she learned to know and love various Renosterveld plants and animals.

Christina graduated with a BA degree in Social Sciences from the University of Stellenbosch in 2001 and worked in a corporate environment as PA to a Managing Director for many years, before giving birth to her twins. Currently, she’s a full-time mom to 5-year old James and Christine. She is also the Director of their farming enterprise.

She is passionate about the protection of the remaining Renosterveld in the Overberg and believes that farming practices should be sustainable, not only in an economic sense, but also to conserve and protect biodiversity. She also believes that the full potential that agri-tourism can play in protecting the Renosterveld, as well as in growing the rural economy, has not been fully unlocked yet. 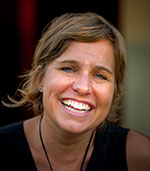 Odette holds a PhD (2013) in Botany from the University of Cape Town (UCT), an MSc Zoology (2005) and a B-Tech in Nature Conservation (CPUT) and has collaborated on 15 scientific publications to date. During her seven years spent in raptor research, she ran the Black Harrier & Black Sparrowhawk Projects from 2000-2006 at UCT and spent two months as a Leadership Intern at Hawk Mountain Sanctuary, Pennsylvania USA. She then undertook a pilot study on gamebirds in Renosterveld (2007) and was contracted by CapeNature’s Stewardship Programme from 2007-2011; while initiating research on Renosterveld management from 2007-present. In 2012, she started the Overberg Renosterveld Conservation Trust (ORCT), continuing her commitment towards securing the last remnants and corridors of remaining Renosterveld in the Overberg for conservation.

Odette has discovered several plant species new to science in Renosterveld, two of which has been named after her. In 2014, she received both the Flora Conservation Award from the South African Botanical Society, and the CAPE Fynbos Conservation Award for ‘her passion, dedication and innovative approach towards the conservation of critically endangered biodiversity.’ She is passionate about Renosterveld conservation and has essentially already spent more than a third of her life working towards improving our ecological understanding of this severely threatened ecosystem, while at the same ensuring that Renosterveld has a future. She lives in Napier, the heart of the Overberg, Western Cape, South Africa.

Sharon King - PA to the Director

Sharon has worked as an Executive PA for many years in both the legal field and corporate world.  She also ran her own cake-making/decorating business from home for a number of years.  She is a newcomer to the ORCT, but is thoroughly enjoying working for Dr Odette Curtis and being involved in Renosterveld conservation.

She is passionate about animals and is involved in animal rescue, in particular Greyhound rescue.  She loves spending time with her pack of rescue mutts and hounds.  She also bakes delicious healthy treats and cakes for dogs.

Keir brings significant experience and expertise to the Trust, formerly working with CapeNature as their Stewardship Extension Officer. Keir was involved in implementation of CapeNature’s Protected Area Expansion Strategy, which included assessments of critical biodiversity areas, extension with landowners and proclamation of Nature Reserves. Prior to holding this post he has worked in wildlife management at Sanbona Wildlife and Shamwari Game Reserves.

Rob is Director of FFI’s Africa Programme, which comprises a portfolio of about 40 projects based in 14 countries. Rob has overseen FFI’s support of the conservation of the Cape Floral Kingdom through several local partners in the Overberg district of the Western Cape over the past 10 years, including the Flower Valley Conservation Trust and the Agulhas Biodiversity Initiative (ABI).

Rob read Zoology at Oxford, studied the behavioural ecology of naked mole-rats in Tsavo NP for his doctorate and has been a rhino conservation specialist since 1986. He has served as part of the senior staff of two wildlife authorities as Coordinator of the national Rhino Conservation Programme for the Kenya Wildlife Service (KWS) and Senior Wildlife Biologist in the Botswana Department of Wildlife and National Parks (DWNP). Before joining FFI in June 2004 Rob coordinated a regional programme for IUCN on rhino conservation in ten southern African countries under the umbrella of the Southern African Development Community (SADC).

Charlie is a writer, botanist, and business person interested in plants, life’s journey, landscapes, arts & history, cultures, cats to “own” and dogs to love and futures thinking. He has been active in numerous Trusts and charities. He is a Non-Exec. Director of the St. Vincent Group Ltd. – a Property and fund management company and the Matara Gardens of Wellbeing – a social enterprise.

Charles’s skills and competencies include fundraising, mentoring, strategic planning, and scientific and general management. He has managed or stimulated a number of multi-million pound visionary projects in Wales and England. As the Founding Director and CEO of the National Botanic Garden of Wales, a £50 million Landmark Millennium Project completed on time and on budget, he brings considerable experience to the service of the Trust. Prior to this he was Deputy Director & Director of Science at the Royal Botanic Gardens Kew and before that a Chief Professional Officer at the Botanic Research Institute (South Africa), as well as Associate Professor at the University of Natal (Pietermaritzburg).

He is an enthusiastic and successful public communicator. He is listed in People of Today 2012 and Who’s Who 2012 and has an Honorary Doctorate of Science from the University of Glamorgan for his contributions to Botanic Gardens. He is currently an Honorary Research Associate (2007-present) at the University of Cape Town and a past Mellon Foundation Mentor (2007-2009). He is the author of four books and 130 scientific publications on weeds, arid plants, plant nomenclature, botanic gardens, conservation, economic botany, plant taxonomy, Amazonian and Mediterranean plants, history, pollination ecology, history, ancient wisdom, philosophy, natural history, and the plant families Leguminosae and Verbenaceae. Charles was born in Pietermaritzburg (South Africa) and has lived in the UK since 1978.

Chris’ conservation career has spanned nearly four decades and has included management of protected areas in the catchments of the Drakensberg, Cedarberg and Langeberg as well as oversight of management of Nature Reserves such as De Hoop and Dyer Island as well as leadership of conservation extension teams. He was a key figure in establishing the Grootvadersbosch and many other Conservancies. Chris went on to establish and manage the Stewardship programme for Cape Nature and continued to provide invaluable insight to landowners in this area and across the Western Cape. Based in Stanford, he is now the Managing Director of a company trading as the Fynbos Trust which enables and supports Landscape Scale Conservation in the Overberg.