Since six Black Harriers were tagged with satellite trackers in 2020, there have been a number of eye-opening discoveries regarding this Endangered species. Chief among these is just how reliant Black Harriers are on Renosterveld, but also how many threats they face every time they take to the skies.

The Overberg Renosterveld Conservation Trust has partnered with harrier guru Dr Rob Simmons of the University of Cape Town, as well as with BirdLife South Africa and the Endangered Wildlife Trust to better understand Black Harriers, how they move and forage, and the greatest threats facing them. 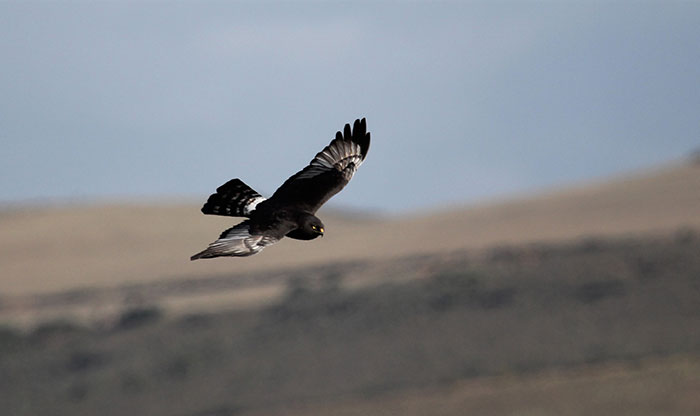 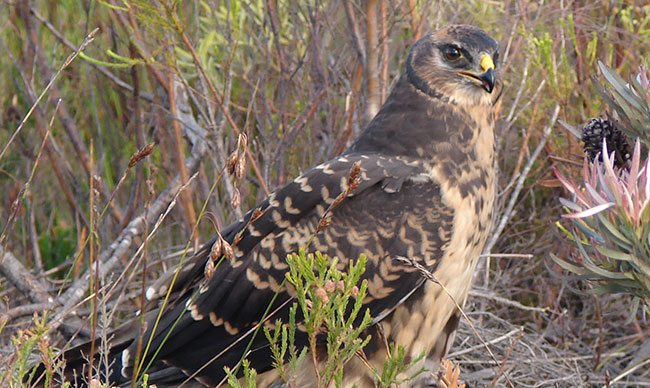 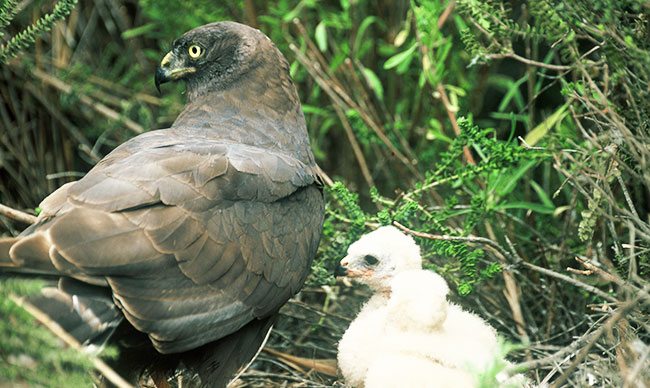 And that’s when we really started to understand these iconic Renosterveld species better.

The data from the satellite tags showed us that Black Harriers in the Overberg could easily cover 30km foraging in one trip. Given the incredible loss of Renosterveld, Black Harriers are also hunting over wheat fields during these trips, although most of the rodents that they feed on occur in natural habitats.

It was also only through satellite tags that we could gather data on mortalities. In fact, two Black Harriers were killed close to each other, in the space of a day, in the Overberg. Both these birds were tagged – and both were killed via man-made activities. The first died in a collision with a wind turbine on the wind farm, and the second was killed by a grain-cutter.

When we started our campaign to raise funds to protect Black Harriers, we asked for R75 000 for three satellite tags. But thanks to your INCREDIBLE response, we’ve got EIGHT satellite tags on the way to us. Thank you so much, to each person and organisation who responded to our call. Our next step? Working with our partners, we’ll fit the tags on Black Harrier birds, to see how they use the landscape, and what the biggest threats are. We’ll give you feedback soon on what we find. 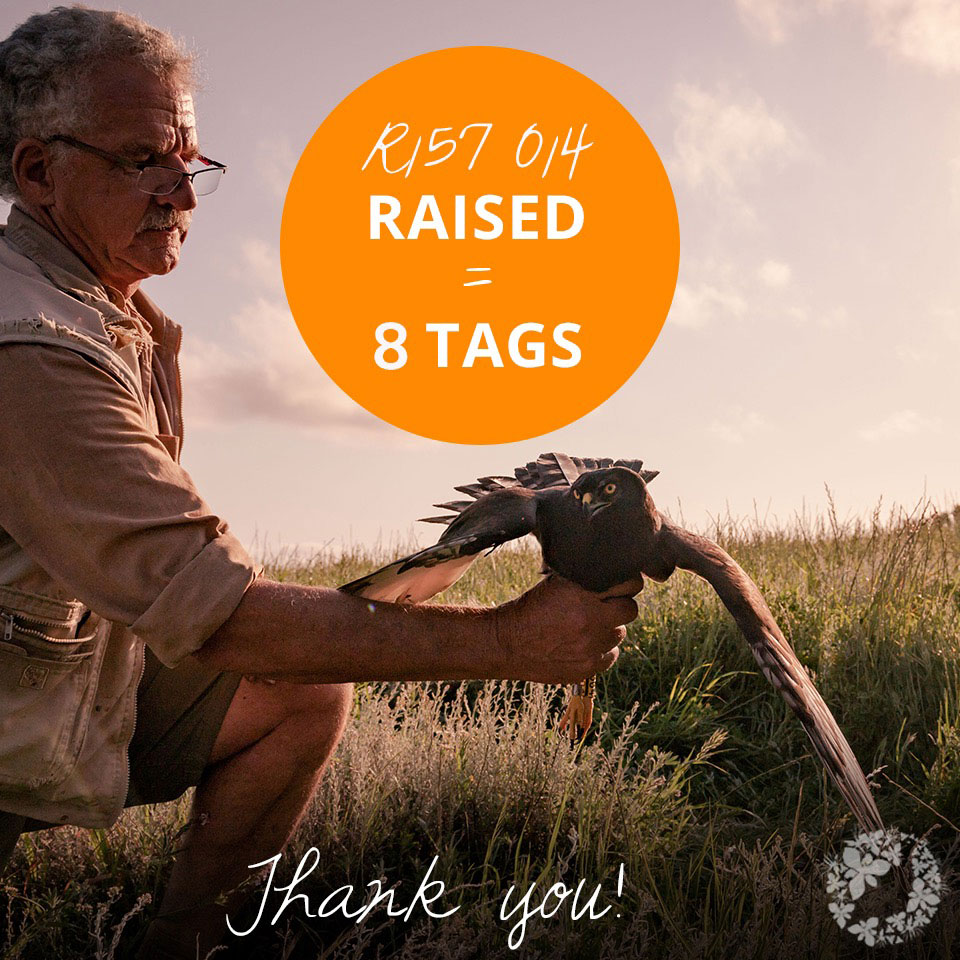 How is it possible that Black Harriers are facing extinction?

Models suggest that harrier numbers are declining by 2.3% a year, and that fewer than 1300 mature individuals remain currently. That’s why they are globally and regionally listed as Endangered. In fact, they’re considered to be one of southern Africa’s most threatened raptors.

These threats are all the more urgent given that the entire wheatbelt (the Renosterveld region) of the Overberg has been identified by government as a Renewable Energy Development Zone, meaning we will see a lot more new wind farm developments in the region relatively soon. While this is important for climate change mitigation, it’s incredibly bad news for harriers. In fact, statistics show that harriers have experienced high mortality rates on wind farms elsewhere in South Africa. The Overberg is a hotspot for harriers and they are one of the most high-risk species for collisions with turbines, which means this ‘green energy’ may end up placing the species at an even higher risk than current models predict.

At the same time, Black Harriers have suffered severe loss in their preferred breeding grounds: Renosterveld. Around 95% of Renosterveld has been converted, mostly for agriculture. As a result, harriers have far fewer safe breeding opportunities.

Black Harriers breed on the ground, often in large colonies, from around September, but they may also breed earlier in the year if prey numbers (small mice) are good. While feeding chicks, they are most at risk as they forage a lot more, and thus may spend more time in and around the wind farms (as they make no effort to avoid them). They lay between three and five eggs. The females incubate the eggs for about a month, while the males find the food and feed the female throughout the incubating period. Once the chicks hatch he also has to forage for her and their small chicks until she starts contributing to foraging when it is safe to leave the nest for short periods.

Our most recent discovery of a colony of Black Harriers was made in a patch of Renosterveld close to a wind farm. While this may one of the largest breeding colonies of Black Harriers in the Overberg, the threats to these birds here are extremely concerning. 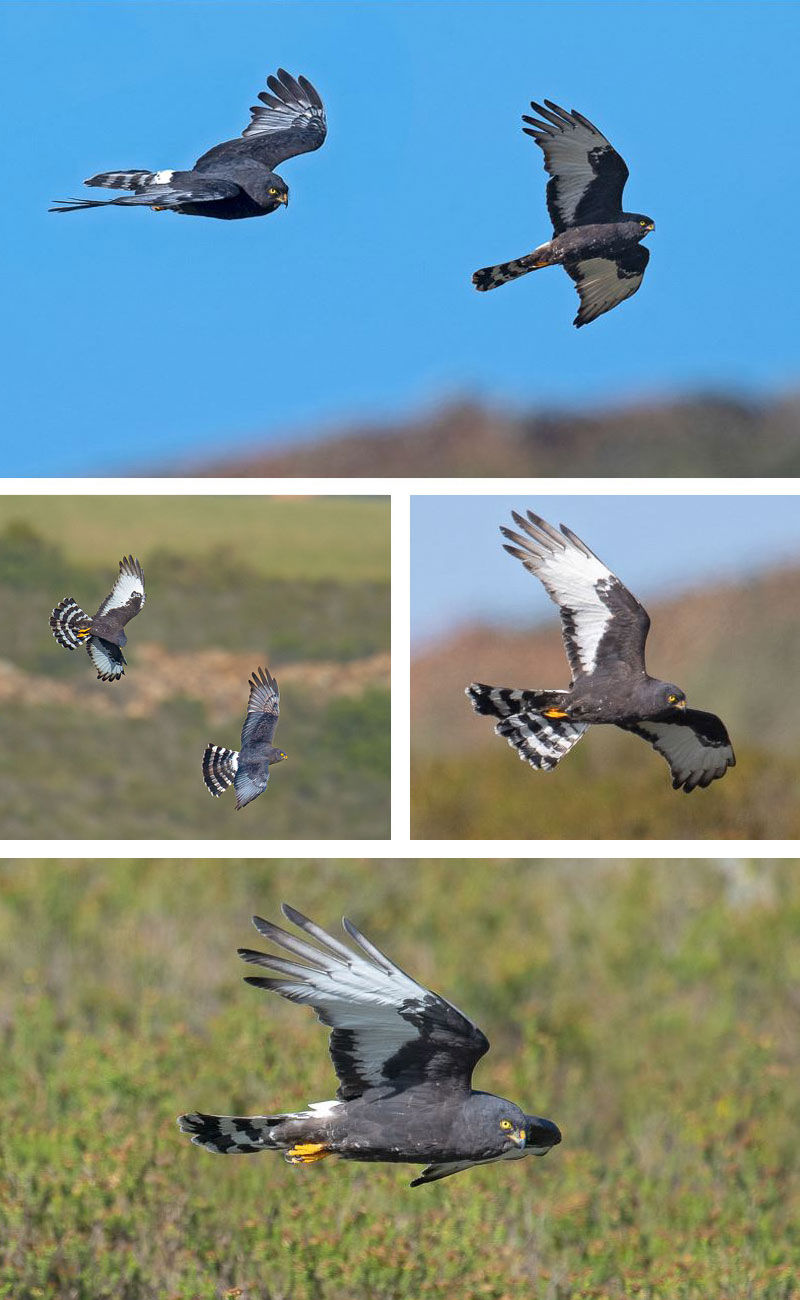 There are many solutions that are vital to the Black Harrier’s survival. A shutdown-on-demand programme at the Excelsior Wind Farm, owned by BTE Renewables, means that when paid observers identify threatened species flying towards a particular wind turbine, they radio into the control room and the turbine is immediately switched off. This has undoubtedly saved the lives of many birds of prey, with around 180 successful shutdowns between December 2020 and November 2021. Following the death of a Black Harrier at a wind turbine on this wind farm, additional measures were put in place, including doubling up on observers at a challenging vantage point.

Aside from the short-term measures to protect birds at wind farms, there are also other methods which eliminate the potential for human error, which have proven to reduce collisions by 100% in some areas: for example, painting one of the turbine blades (or two-thirds of it) black, which makes the turning blades highly visible to birds. This idea has been tested in Norway and was found to be 100% successful with no running costs. It urgently needs to be tested elsewhere, including in South Africa. However, painting blades is not favoured by South African wind farms as yet because it has an impact on the warranty of the blades and civil aviation insists on white blades. Much work still needs to take place before such interventions become common practice. Other mitigation measures such as the automated shut down are extremely costly and difficult to implement post-construction, thus the ORCT and others are pushing for further consideration of the black blade option.

Our webinar with BirdLife South Africa

Dr Rob Simmons and I participated in the BirdLife South Africa Conservation Conversation webinar on Tuesday 28 June 2022. We discussed Black Harriers, their threats, and what we’re doing to protect them.

What are the ORCT and our partners doing about this?

The ORCT has adopted a two-pronged approach:

Six birds have been tagged to date, and one more tag has been secured. And this has only been achieved through incredible partnerships with individuals and organisations that care. These seven satellite tags were donated by: 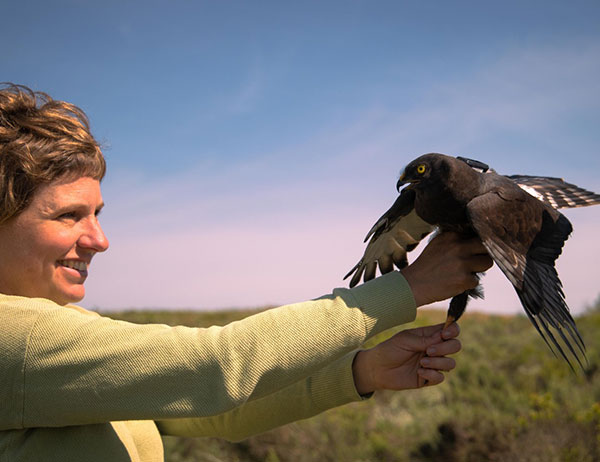 Why the ORCT cares so much

For ORCT Director, Dr Odette Curtis-Scott, Black Harriers paved the way to the creation of the ORCT. She says,

“From a very young age, I was drawn to birds of prey, which introduced me to what is arguably South Africa’s most charismatic raptor. Since 2000, I have been involved in studying Black Harriers and the Renosterveld habitats on which they depend. Yet there is so much that we need to still understand about the species, and its relationship with its preferred Fynbos and Renosterveld habitats, if we are to save them from an otherwise very gloomy future.”

Our role as a Black Harrier Species Guardian