How many plant species are there in the world? At present according to RBG Kew’s ‘State of the World’s Plants’ report there are about 391,000 species of vascular plants. Around 361,000 of these are flowering plants. This number includes only those already described and even after years of human exploration of the globe vast numbers of species of all life are still being discovered as new to science. The numbers are staggering: Between 15,000 and 18,000 new species are being described each year, around half of which are insects. One might think that to discover a new species one needs to journey deep into the rainforest or to some isolated and unclimbed mountain range. Not so: Here in South Africa’s Cape Floristic Region (CFR), one of the world’s biodiversity hotspots and a World Heritage Site, new species can often turn up right on our doorsteps. 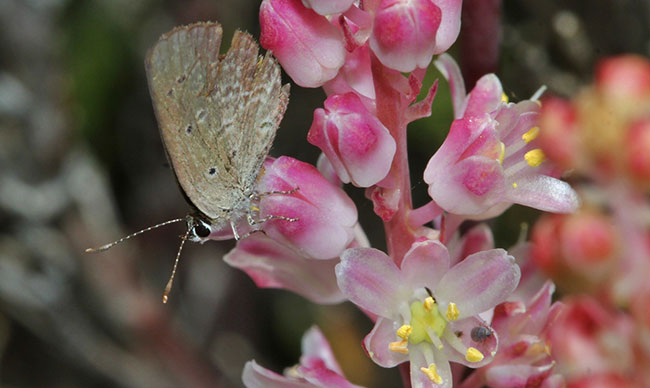 Renosterveld vegetation forms part of the CFR’s Fynbos Biome but is in fact the poor sister to Fynbos vegetation in terms of research and understanding. It is one of the world’s most species diverse Mediterranean type shrublands and yet also one of the most neglected and underexplored. Members of the Overberg Renosterveld Conservation Trust have discovered ten new plant species to date over the last five years, from beautiful bulbs to a curious prostrate bonsai-like Legume known as Aspalathus quartzicola, which grows on quartz patches within Eastern Rûens Shale Renosterveld. Now the Trust has discovered another new species, published recently by Kirstenbosch National Botanic Gardens bulb expert Graham Duncan.

Lachenalia barbarae, with its beautiful and delicate looking pink flowers, was initially discovered by Dr Odette Curtis, Founder and Director of the ORCT, who collected and mounted a late stage flowering specimen during her PhD research. It was later found again by our Reserve Manager Jannie Groenewald who realised that the plant was likely to be a new species. This was confirmed a year later from a type collection in the Kirstenbosch Nursery by Graham Duncan and then illustrated by botanical artist Vicki Thomas. The paper describing the species has now been published in the journal ‘Phytotaxa’.

Lachenalia barbarae was named in honour of Barbara Taylor, mother of prominent ORCT donor Oren Taylor. Oren is one of the Trust’s most loyal supporters in its vital work of conserving the Critically Endangered Renosterveld of the Overberg to date. In 2012 he purchased the naming rights at auction of a new Renosterveld Hesperantha species discovered. This species was named Hesperantha kiaratayloriae after Oren’s daughter. 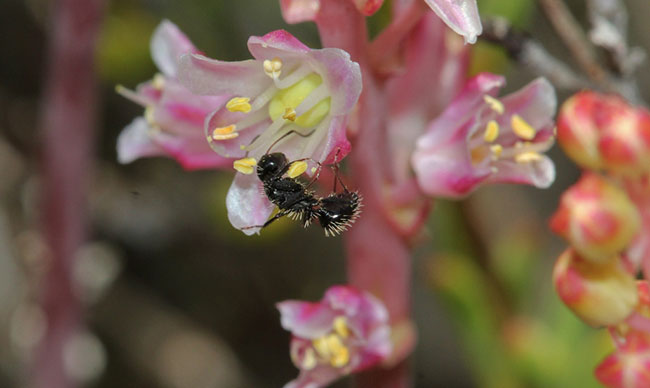 Lachenalia barbarae had likely eluded scientists for so long as a result of its unusual flowering time. While most Overberg Renosterveld plant species flower during late winter and spring, this species flowers in December to January at the hot and dry height of summer when few people are exploring the veld. It is known at present from just one locality and is therefore Critically Endangered on the Red List of South African plants. It is likely that both its specialist habitat and habitat loss through transformation for agriculture have both played a part in its now highly restricted distribution. Ongoing monitoring and effective conservation are needed to ensure this species survives in perpetuity and does not move closer to extinction along with one in five of the world’s plant species.

Above: Aspalathus quartzicola. This species, like Aspalathus quartzicola, grows on quartz patches within Rûens Shale Renosterveld. It is visited by the small common hairtail butterfly Athene definita (Lycaenidae) and a small, unidentified solitary wasp. Another amazing discovery again highlighting the importance of the ORCT’s work in conserving what remains of our beautiful and biodiverse Overberg Renosterveld.