As the weather warms at the end of the winter months, spring is in full swing in the Overberg with beautiful blooms aplenty to see in the Renosterveld. Our team has been spending lots of time in the veld, conducting biodiversity surveys and collecting conservation data.

One beautiful genus of bulbs one can look for in the Renosterveld right now is the Lachenalias, also known as Cape Cowslips or Viooltjies in Afrikaans. A member of the Hyacynthaceae family, the genus Lachenalia comprises c. 110 known species from the winter rainfall areas of South Africa and Namibia. The main centres of diversity for the genus are southern Namaqualand and the Western Cape.

Only recently described by taxonomists in 2017, this delicate looking beauty was initially discovered by our founder and director Dr. Odette Curtis-Scott, who collected and mounted a late stage flowering specimen during her PhD research. It was later seen again by former Haarwegskloof reserve manager Jannie Groenewald who realised it was likely to be a new species. This was later confirmed by bulb expert Graham Duncan, with the description being published in the journal ‘Phytotaxa’.

Lachenalia barbarae is known from just one locality in the Eastern Rûens. It flowers in December and January during the peak of the summer months when little else is in bloom in the Renosterveld. It is thought that it’s habitat was once more extensive but has been lost through habitat transformation for agriculture. Lachenalia barbarae is Critically Endangered on the Red List of South African Plants. 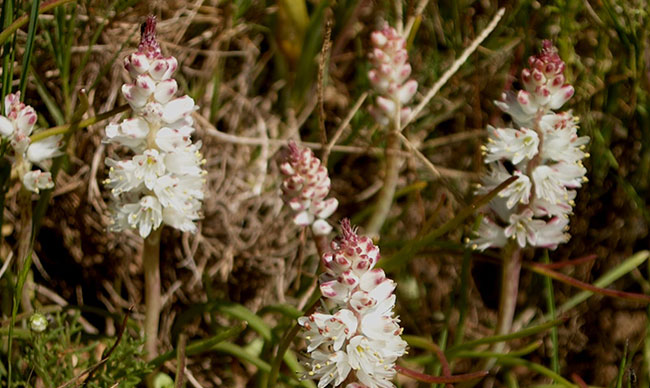 This delicate beauty grows in wet lowland areas from Citrusdal southwards to the Cape Peninsula and eastwards to Bredasdorp. It grows in a variety of different Fynbos and Renosterveld vegetation types, coming into bloom from August to October. The white bell shaped flowers are pollinated by honeybees but are also visited by the day flying Heady Maiden moth (Amata cerbera).

Subpopulations of this species have become highly fragmented due to habitat loss from urban development and habitat transformation for agriculture. It is therefore listed as Near Threatened on the Red List of South African Plants.

A widespread species with many different size and colour forms Lachenalia mutabilis is distributed from Namaqualand through the western Karoo to Napier and de Hoop in the Overberg. The species epithet mutabilis in fact refers to the degree of variation in size and colour of the flowers. This species can be seen flowering in the Renosterveld from July through to September. The flowers are pollinated by honeybees.

Known from clay flats and lower slopes from Napier in the western Overberg eastwards to George on the Garden Route. Lachenalia nervosa grows on sandy or clay flats and lower slopes, easily recognised by its distinctive and sweetly scented blooms. Flowering takes place from September to November, with the flowers thought to be pollinated by honeybees. Population decline of Lachenalia nervosa is ongoing as a result of pressure from alien invasive plants and habitat loss due to transformation for agriculture. It is therefore listed as Endangered on the Red List of South African Plants. 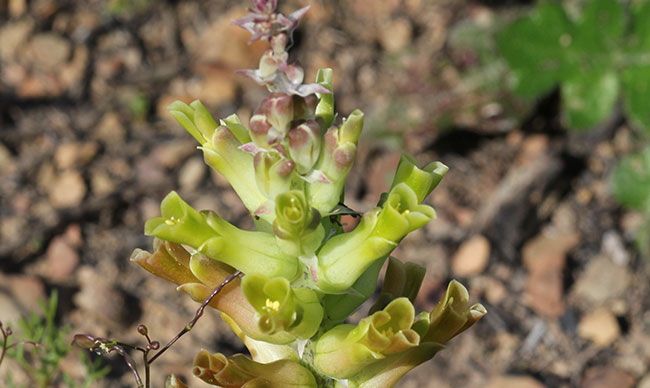 This relatively common Lachenalia is widespread on stony soils across the Western Cape in a wide range of different vegetation types. Blooming from July to August, the flowers are sweetly scented and greenish yellow when they first open, maturing to a dull red colour. The species epithet orchoides refers to the sweet orchid-like aroma of the flowers. 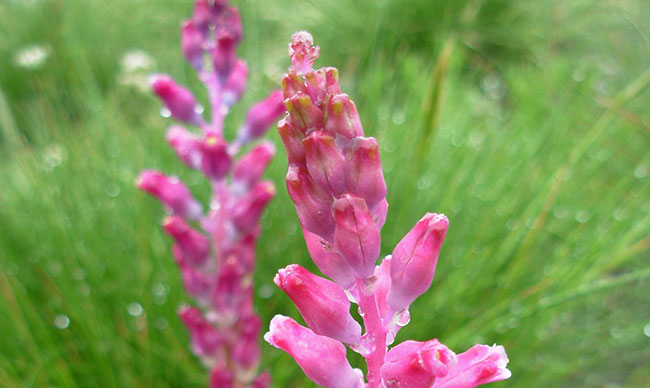 With pink varying to pink and blue flowers, this widespread Lachenalia is distributed from the Cape Peninsula eastwards to Knysna where it grows on wet flats with a variety of different soil types. Flowering takes place from August to September, with the blooms pollinated by honeybees.