As spring gives way to summer in the Overberg it is time to take a look back and reflect on what is always our busiest time of year. Spring is the time that the Renosterveld comes into bloom with a plethora of beautiful flowers of all shapes and colours. That narrow six-eight week window when most species are in flower is also the time for the Overberg Renosterveld Conservation Trust (ORCT) team to spend as much time as they can in the veld. To best conserve the Overberg’s Critically Endangered Renosterveld it is critical we understand what we have and where it is found and so spring is a time of biodiversity surveys and monitoring. Detailed datasets are accumulated on the state of the veld to inform implementing best conservation protocol. Information on what is found is fed back to other partners to support their work as well as landowners as custodians of Overberg Renosterveld.

Despite the ongoing drought spring was as rewarding a time as ever with many fascinating discoveries made. Here are some of the ORCT’s spring highlights from the team’s fieldwork this season. 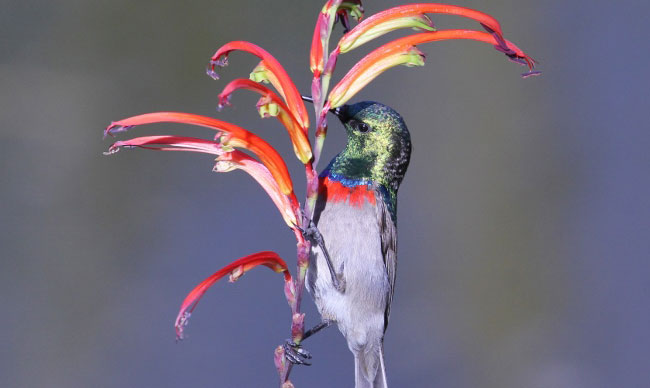 Several new populations of Chasmanthe bicolor were discovered. This spectacular geophyte is here being pollinated by a Lesser Double Collared Sunbird. Chasmanthe bicolor is a member of the Iridaceae family. It is also known as the Two Colour Chasmanthe or Suurkanol or Suurkanolpypie in Afrikaans. The genus name Chasmanthe means ‘gaping mouth’ from the Greek words ‘Chasme’ meaning ‘gaping’ and ‘anthos’ meaning ‘flower’. Chasmanthe bicolor grows in sheltered ravines and open woodland adjacent to watercourses. It is distributed from Mcgregor to Swellendam although its full geographic range is not well known. It is known from around ten sites and has lost considerable habitat due to transformation for agriculture. It is therefore Vulnerable on the Red List of South African Plants. 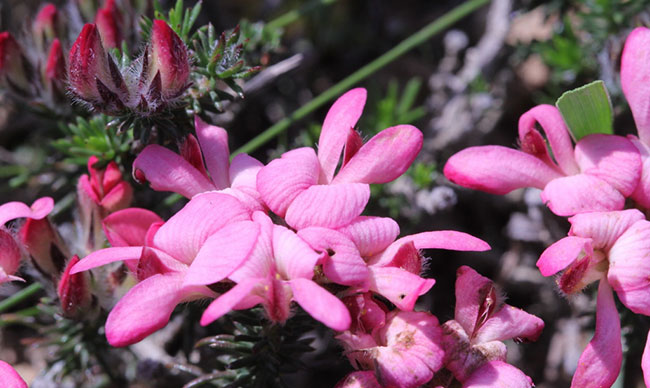 Aspalathus rosea is a member of the Fabaceae or Pea family. This plant comes from the same genus as that used to make Rooibos tea. It is distributed from Botrivier to Elim where it grows in Elim Ferricrete Fynbos, Western and Central Rûens Shale Renosterveld. This species is known from just seven sites at present with ongoing habitat loss due to transformation for agriculture a significant threat. It is also threatened by alien plant invasion. 50% of its former habitat has been lost over the last 45 years making it imperative that its remaining habitat is effectively conserved in perpetuity.  Aspalathus rosea is listed as Endangered on the Red List of South African Plants. 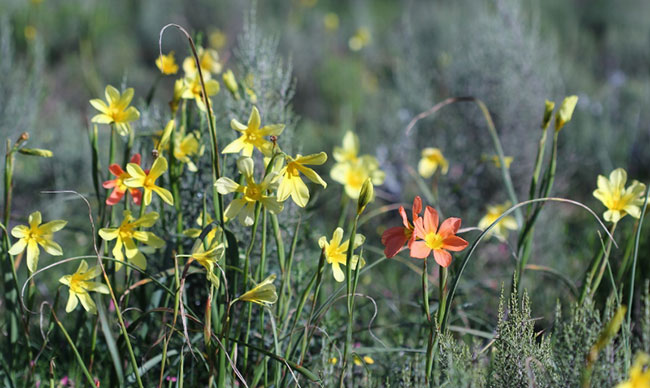 Here seen is Moraea comptonii growing in Western Rûens Shale Renosterveld. This scene is one of the Renosterveld conservation success stories of this spring season. This site was previously heavily grazed by sheep and has recently been fenced with support from the ORCT to allow livestock grazing to be more effectively managed. Renosterveld biodiversity has significantly improved since the fence went up with one of the highlights being en mass displays of this Endangered species which is only known from around six different sites. This photo shows the two different colour forms (orange and yellow) of this species. 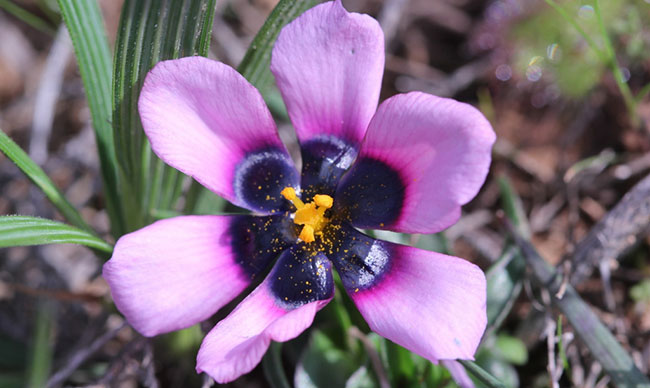 The beautiful Moraea melanops was only discovered as new to science and described as a new species in 2000. It is a member of the Iridaceae family. According to the Red List of South African Plants it is known from just three sites and is listed as Endangered. It grows on clay slopes in Renosterveld and is distributed from Caledon to Bredasdorp. This season the ORCT discovered several new populations of this species. 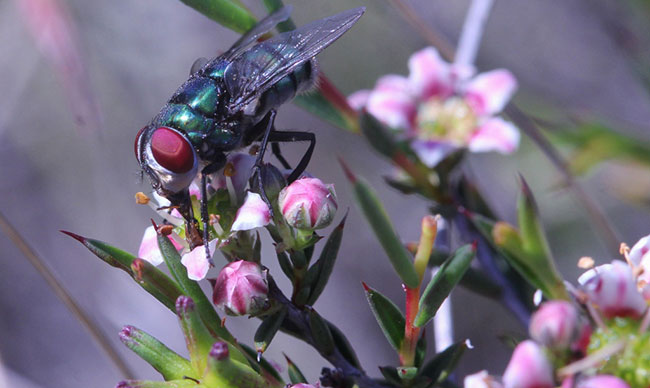 Here we get up close and personal with a fly pollinating the buchu Diosma fallax. Pollinator observations are an important part of the ORCT’s spring biodiversity surveys and this is also an important focus for several of the postgraduate students undertaking research in collaboration with the ORCT. We still know relatively little about pollination systems within Overberg Renosterveld, in particular the impact of transformation and fragmentation of this imperilled ecosystem upon the survival of specialist pollinators and their ability to move between Renosterveld patches in the agricultural landscapes of the Overberg. The Trust and its collaborating students are working hard to better understand this critical component of Overberg Renosterveld ecology to help best direct conservation action. Diosma fallax is listed as Endangered, with only a couple of small populations around Bontebok National Park. However, this year, the ORCT found a previously unknown population of this species south of Riviersonderend – expanding the known range of the species substantially. 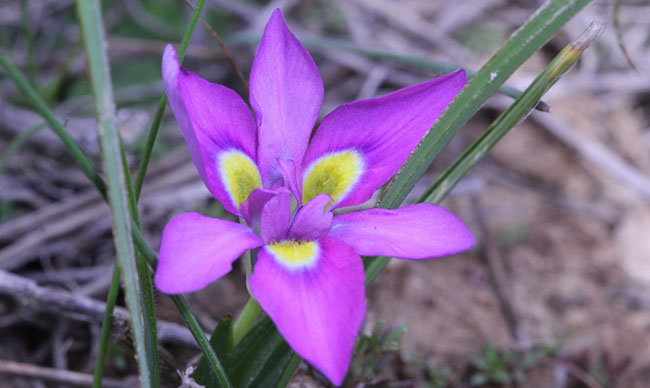 Often to best appreciate Renosterveld one has to get down on hands and knees to take a closer look at the often tiny plant species when in flower. The small Moraea tricolor is no exception. It has a variety of different colour forms from yellow to pink and occurs from Citrusdal to Caledon on sandy or clay flats in Fynbos and Renosterveld vegetation. It is only known from around 12 sites as a result of habitat loss through urbanisation and transformation for agriculture. It is therefore Endangered on the Red List of South African Plants. 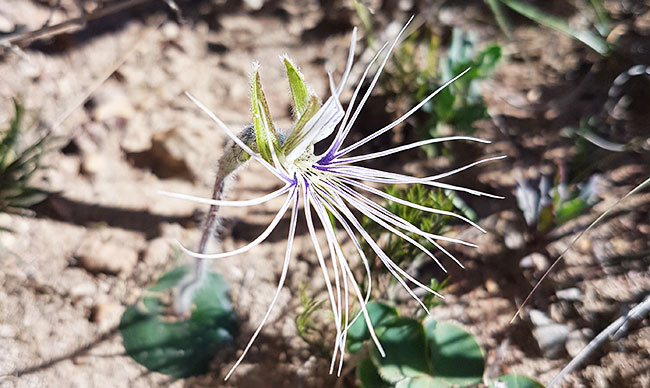 Another tiny but spectacular highlight of the ORCT’s spring field season was this Spider Orchid (Bartholina burmanniana). This species was named after Dutch physician and botanist Johannes Burman (1707-1779) by Linnaeus in 1760 after it was collected by Heinrich Bernard Oldenland. Bartholina burmanniana was one of the first of the Cape orchids to appear in the published literature and it was cultivated at Kew Gardens in London from 1787 onwards from specimens collected by Francis Masson. It is widespread throughout the Cape Floristic Region, growing in both lowland and mountain habitats. It is thought to be pollinated by the long-tongued fly Philoliche rostrata.

These are just some of the ORCT’s spring highlights. We hope that this has inspired you to get out into your ‘backyard’ to explore and support conservation efforts for the extraordinary biodiversity of the Cape Floristic Region.