You are here: Home / Renosterveld Centre / First Renosterveld Land Purchase in the Overberg
We are VERY excited to announce that WWF-SA has purchased the first piece of renosterveld in the Overberg and we, the OLCT, will be managing this land as a nature reserve. We also hope to establish a research centre on the land. This is the result of nearly five years of collaborative efforts between us and WWF and finally, we have our first piece of land, secured forever for conservation.
The farm is called Haarwegskloof and comprises about 500 ha of Eastern Ruens Shale Renosterveld, just north of De Hoop Nature Reserve. This special veld contains several quartz patches, which are where we have found many of our new and threatened species – most notably, it contains the only known population of Polhillia curtisiae.
Thank you to our colleagues at WWF for never giving up and for persisting until this deal was closed. This is a hugely significant step forward for renosterveld conservation in the Overberg. 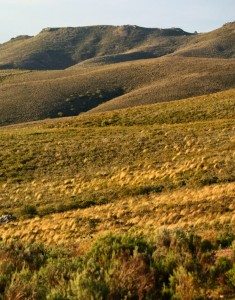 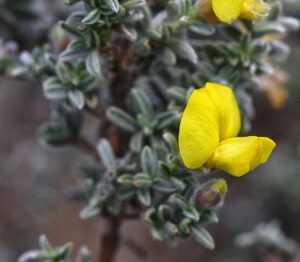 Polhillia curtisiae, CR, only one known population in the world

Gibbeaum haaglenii (EN) growing at Haarwegskloof
Haarwegskloof with quartz patches in the foreground. This farm is linked with large, adjacent patches, making it part of the largest pristine lowland renosterveld remaining on earth.

“My nerves were frayed”: Would Renosterveld deliver on spider diversity?

Herbarium | Solving the mysteries of Renosterveld – it all starts here