First ever ‘Field Guide to Renosterveld of the Overberg’ released

The first ever ‘Field Guide to the Renosterveld of the Overberg’ has been completed and released. This comprehensive guide includes 980 Renosterveld species and 140 animal species you’ll find in this habitat.

According to Odette, the ‘Field Guide to the Renosterveld of the Overberg’ is the result of five years of extensive research. “But it’s more than that: It really captures so much of what I’ve learnt over the past 15 years in Renosterveld, while also tapping into the knowledge of some of the Cape Floristic Region’s leading experts.”

The book brings to life one of the world’s most threatened habitats – and is a vital addition to any nature lover’s field guide collection.

Odette says the release of the book marks one of her career highlights. “We see the difference it can make to people when they learn more about Renosterveld – which is perceived as the ‘ugly’ sister of Fynbos and has been neglected and misunderstood for too long. But with knowledge and information we often experience an attitude change towards Renosterveld. I’ve seen this with so many of the farmers we work with.”

She adds, “That’s why it’s my dream that this book brings Renosterveld to life – both to those who simply want to spend time enjoying and exploring this rich ecosystem, and to those who hold its future in their hands.”

Renosterveld is one of the most threatened habitats on earth – with only 5% remaining. Most has been lost to agriculture, while it also faces threats from land degradation and broad-scale chemical use. However, it is known as the richest bulb habitat on Earth, and houses the highest levels of plant diversity known within the Mediterranean ecosystems globally. 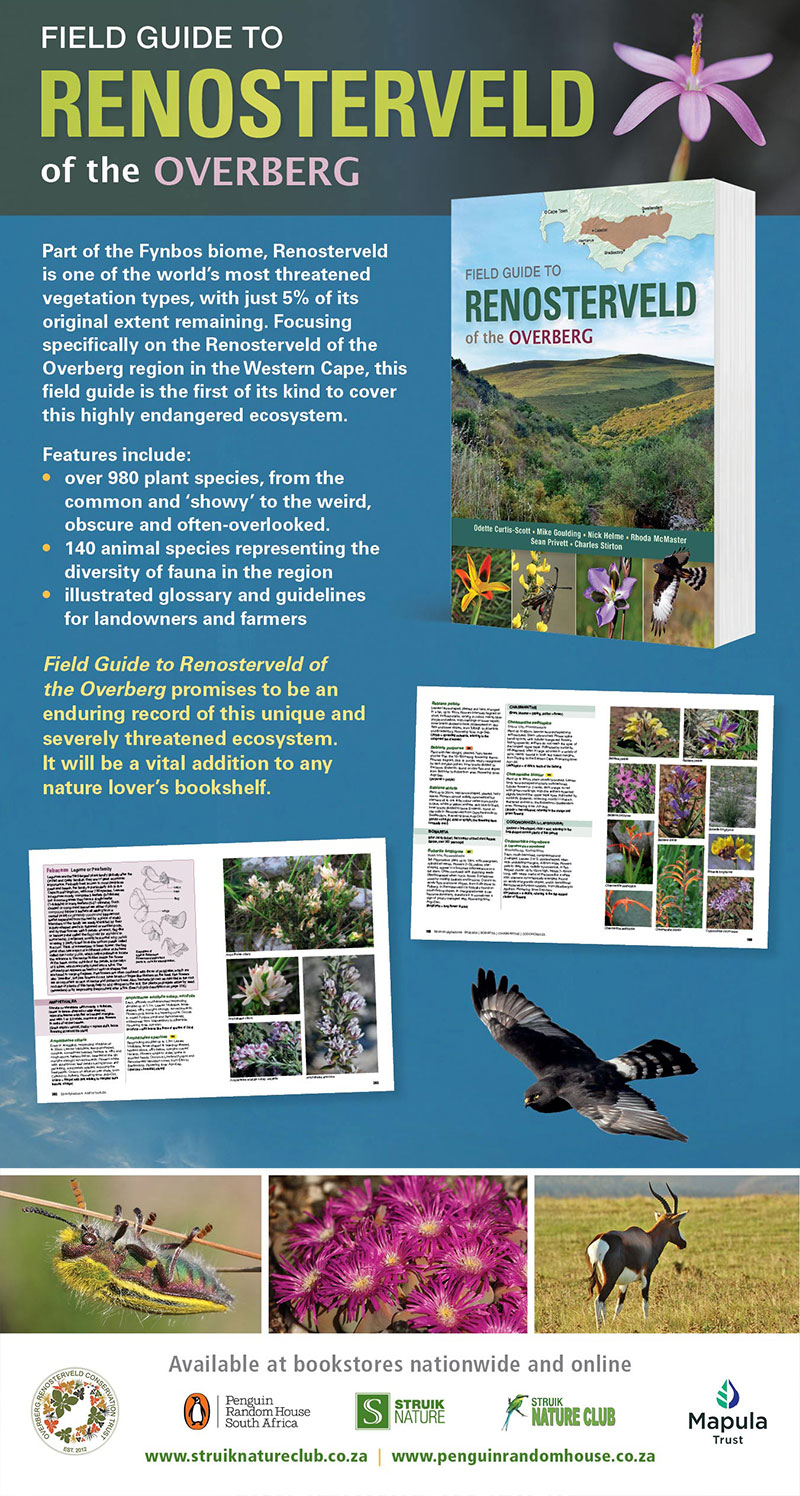 “We want to share not only the plight of Renosterveld – but many of its wonders and secrets – with botanical and conservation-minded communities,” she says. “We hope this book will incite in you the inspiration to protect what remains of our Renosterveld habitats.”

The guide is available from Penguin Random House or from Kirstenbosbosch Bookshop (as well as on their online shop) and other bookstores around the country.

“I have the great fortune of being involved in wonderful conservation projects in the United States and all around the world, but I consider the work of ORCT to be the most important – ORCT’s work to conserve a highly diverse and endangered ecosystem that is globally outstanding and a unique World Heritage Site is truly amazing – but equally amazing is how they involve local communities and farmers to pitch in and work together hand in hand to make magic happen.”  David Houghton