The Black Harrier is one of Southern Africa’s most beautiful and charismatic birds of prey. It a graceful, medium sized charcoal-coloured bird with striking white markings, piercing yellow eyes and a long barred tail. The genus name Circus is given in reference to the male’s circling acrobatic display or ‘sky dancing’ flight which is used to impress the female during courtship. The species epithet ‘maurus’ is used to refer to the predominantly dark colouring of the bird. During this flight the males let out a distinctive ‘wheep’ call.

The Black Harrier is a bird of great poignance to the Overberg Lowlands Conservation Trust (OLCT). One may even go so far as to say that the OLCT may not even exist were it not for this beautiful bird. The Trust’s Founder and Director, Dr. Odette Curtis, first became interested in Renosterveld vegetation in the Overberg through studying Black Harriers under the wise supervision of Dr Rob Simmons, Dr Andrew Jenkins and the late Prof Phil Hockey of the Percy Fitzpatrick Institute of African Ornithology. This formed part of the University of Cape Town’s Black Harrier Project, started by Rob, Odette and Andrew at the ‘Fitz’ in 2000. Members of this research group are also designated as the BirdLife Species Guardians of the Black Harrier under the Preventing Extinctions Programme. The main aims of this programme are to assess the biology and monitor the status of this species to inform conservation action.

The findings of Odette’s research formed part of the Black Harrier project and yielded some highly valuable findings of great significance to Renosterveld conservation. Although this project was undertaken some ten years ago its results hold as much significance today as they did when this research was first done. Odette’s work revealed that Black Harriers need a minimum Renosterveld patch size of 100 ha in which to breed. They also use the veld to forage and display. If the Renosterveld becomes fragmented or degraded the Black Harriers will in most cases fail to breed successfully or leave.

The Black Harrier is a bird that needs all the help it can get as its conservation status is fragile owing to loss of habitat due to urbanisation and transformation for agriculture. It is classified as ‘Endangered’ on the latest Red List in South Africa and considered ‘Vulnerable’ at the global scale. There are thought to be no more than 1500 Black Harriers in the world at present with potentially less than 1000 mature individuals remaining. They are endemic to Southern Africa, concentrated predominantly in South Africa’s Western Cape. The range of this species extends across the Eastern Cape, Free State and Northern Cape as well as into Lesotho. There is also a tiny population of less than 50 birds in northern Namibia. 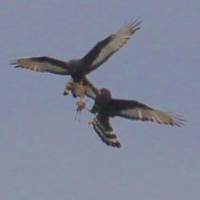 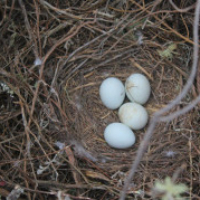 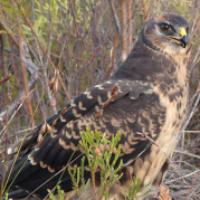 During the 20th Century the Black Harrier has lost around 50% of its habitat owing to transformation for agriculture. Although they are seen foraging in cereal wheatlands, they struggle to exist and cannot breed here as rodent populations (their primary source of food) are thought to be as little as 33% of that in comparable natural vegetation. In addition, Black Harriers are particularly vulnerable owing to being ground-nesting birds. The main harvest time for wheat is in the middle of the peak breeding season for these birds. Herbicide and pesticide drift is also a significant problem, causing lack of breeding success through low hatching rates. Ingestion of these chemicals is furthermore considered a cause of mortality in adult individuals. Pollution, mismanagement and destruction of vleis, marshes and streams near breeding grounds is considered to be a further threat. In the Overberg only 5% of the former extent of Renosterveld vegetation remains, and loss of this habitat has thought to have brought about a reduction from a total of an estimated 1500 breeding pairs living across the region historically being reduced to a total of only around 60 pairs.

Soon after the building work was completed and the Centre first came into use we were delighted and overjoyed to discover that no less than three pairs of Black Harriers were breeding in the reserve. This is a wonderful measure of the incredible biodiversity and ecosystem health of this amazing site. Now thanks to WWF, the Overberg Lowlands Conservation Trust and its other supporting partners the conservation of Haarwegskloof Renosterveld Reserve is secured in perpetuity. Long may visitors have the privilege of seeing Black Harriers ‘sky dancing’ over the reserve.