In the heat and dry conditions of the summer months in the Overberg, it can be less than tempting to spend time outside in the veld. Most of the leaves and seedheads from the spectacular spring bulbs have become dry and entered dormancy for their summer sleep, ready for their green shoots to emerge when autumn comes around again next year. 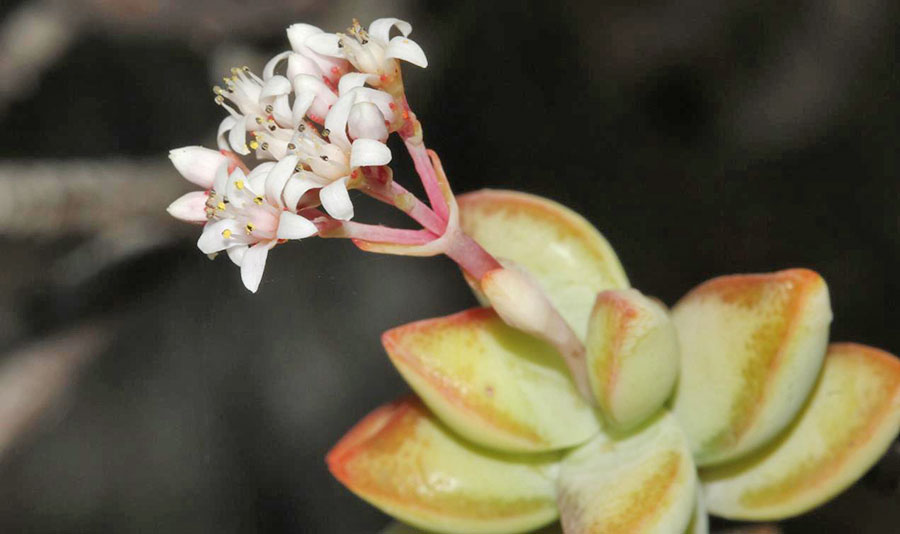 But there is one plant group that has a different range of adaptations to survive under the harsh and dry summer conditions of Overberg Renosterveld. They are the succulents, of which there is an extraordinary diversity of species in this highly threatened vegetation.

We will be taking a closer look at these fascinating and varied plants on this edition of the blog. 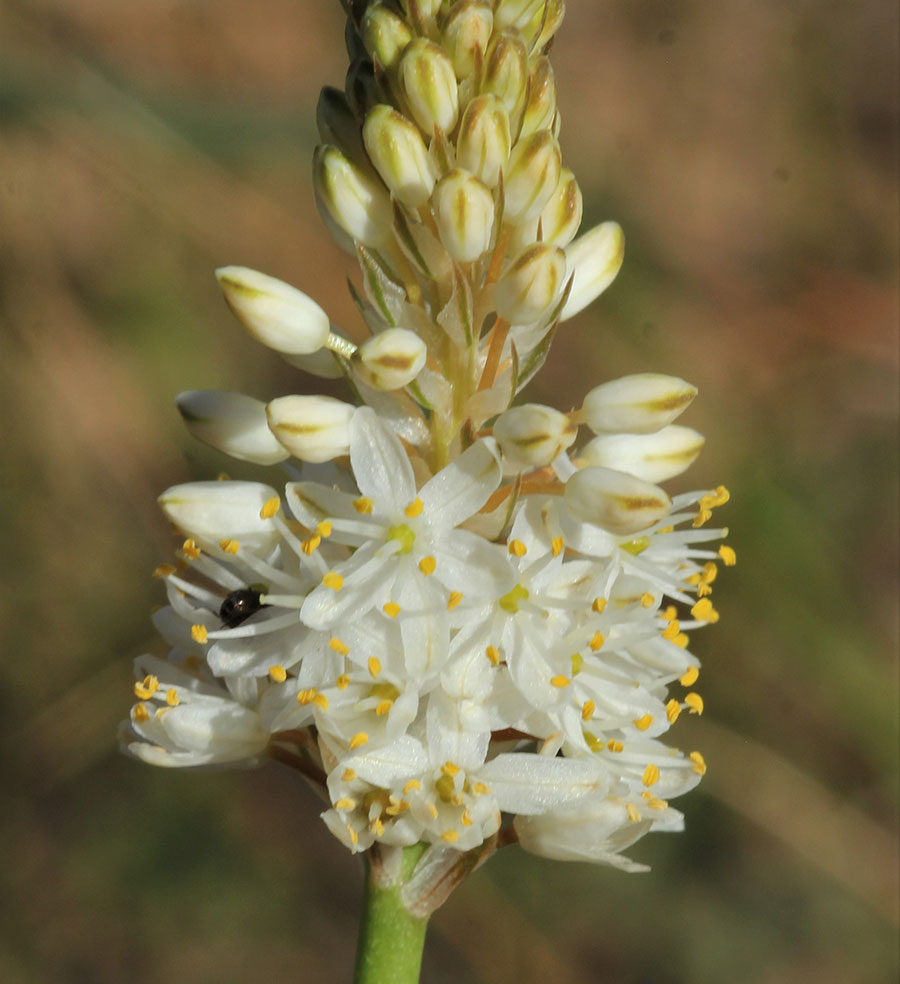 Botanists define succulents as any plant that has any anatomical part that is thickened, fleshy, or engorged so that they can retain water under dry weather conditions. The name is derived from the Latin word “succus”, which means either “juice” or “sap”.

Succulents are differentiated from geophytes in that they are adapted to survive growth while they are actively growing, rather than surviving underground while dormant as bulbs, tubers, or corms. 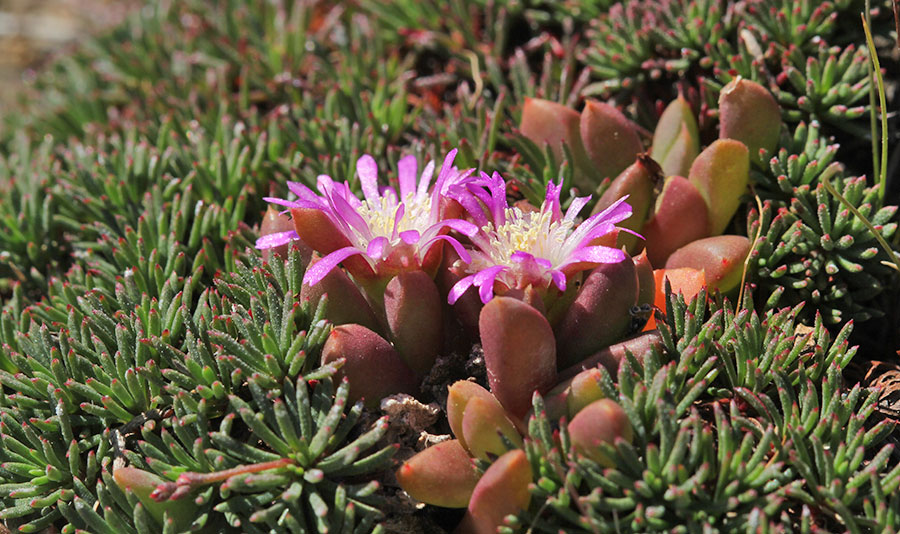 There are an estimated 10 000 succulent plant species that occur worldwide, from more than 80 flowering plant families.

Succulent plants are most common in arid or semi-arid areas. However, even with too high a rainfall to fall into these climatic zones, Overberg Renosterveld has an extraordinarily high level of succulent diversity. Its strong affinity to Succulent Karoo has led many scientists to question whether this biodiverse and often misunderstood vegetation should belong in the Fynbos Biome.

In late spring and early summer, splashes of neon pink, red and white light up among the dominant grey renosterbos. These are the vygies, with the name meaning “small fig” in Afrikaans in reference to the shape of the fruiting capsule.

When they have finished flowering, the fruiting capsules of most vygies become dry, waiting for the next rain to come. They remain closed and attached to the plants until the first raindrops fall. The water from the raindrops triggers the seed capsules to open, dispersing the seeds away from the parent plant and ensuring that the seeds fall to earth when the soil has received the rain needed to support germination. 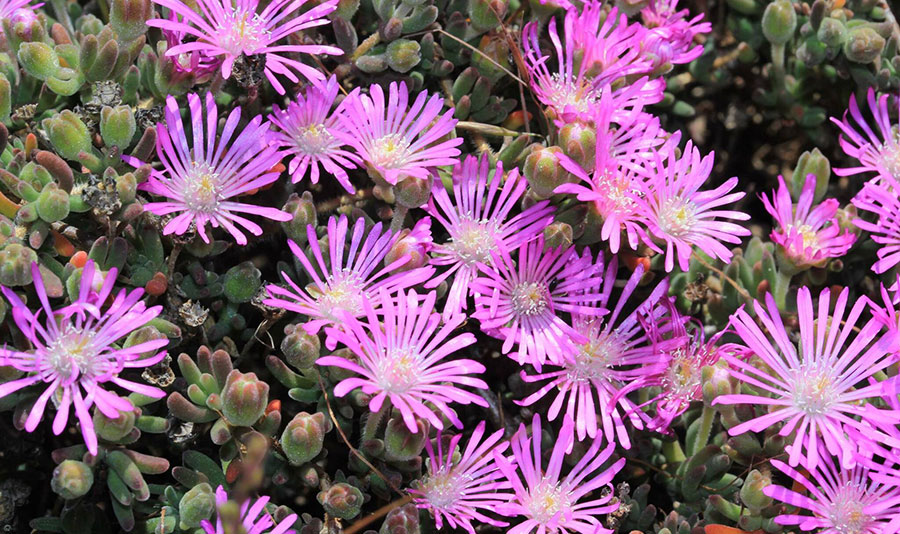 The vygies belong to the Aizoaceae or Ice Plant family. Plants in this group are pollinated by insects including a range of bees and bee flies. Some have a more prostrate habit, such as the pink flowered Drosanthemum hispidum.

Some vygies have a more upright habit, such as the quartz patch endemic Drosanthemum quadratum that is listed as Endangered on the Red List of South African Plants.

The densely branched Endangered shrublet Drosanthemum lavisii has solitary reddish flowers that are copper in colour underneath. It is named after Cape plant collector Bishop Warren Lavis. This spectacular vygie is found on shale outcrops that often have quartz pebbles and is distributed from Greyton to Bredasdorp. 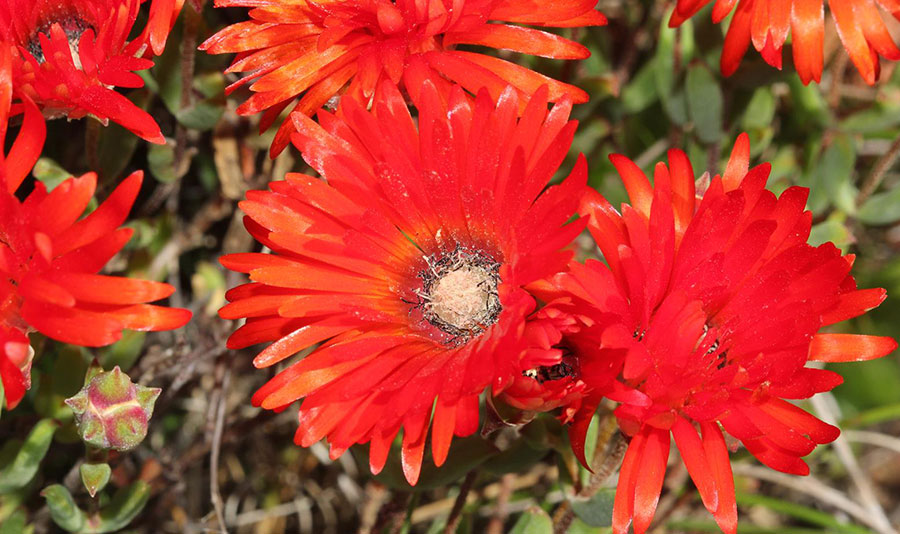 The Rooivygie Drosanthemum speciosum is appropriately named, with its species epithet meaning “beautiful”. The leaves have many bladder cells, which are an adaptation that allow them to survive the hot and dry conditions of the Overberg summer. Look out for this beauty in Eastern Rûens Overberg Renosterveld along the Breede River when it can be seen in bloom from August to October.

Another extraordinary group in the vygie (Aizoaceae) family is the genus Gibbaueum, also known as ‘Living Stones’ or ‘Bababoudjies’. All members of the genus that are found in the Overberg are of conservation concern, with the most threatened being Gibbaeum esterhuyseniae that is listed as Critically Endangered on the Red List. This species along with Endangered G. hartmannianum and G. ihlenfeldtii are adapted to the harsh and specialist conditions found on Renosterveld quartz outcrops.

More observant succulent plant lovers may be lucky enough to spot the tiny dwarf succulent Doringkroonvygies or Trichodiadema. The genus name is Greek in origin and refers to the crown of hair-like bristles at the leaf tip that can be used to distinguish it from other genera. 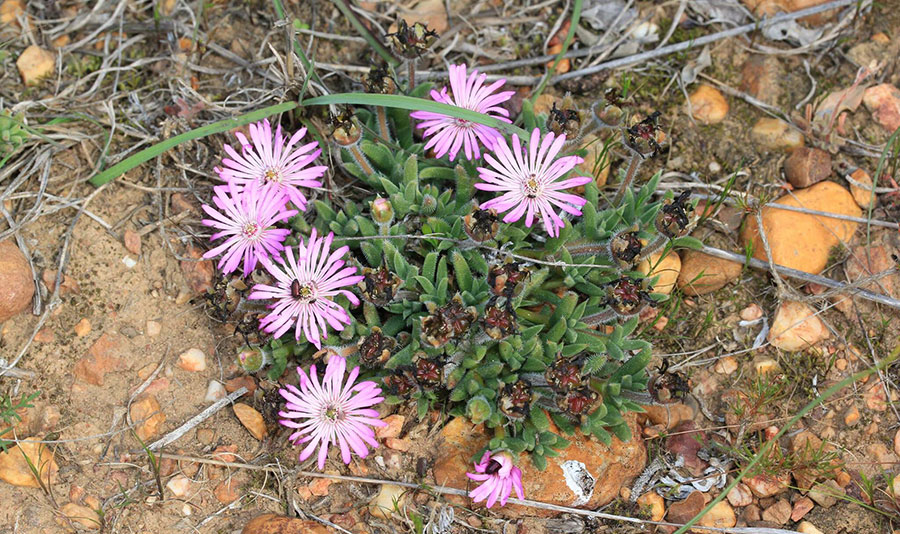 Look out for T. gracile with small bladder-celled hairy leaves and long bristles on the leaf tips. This species has pink flowers and can be found growing on dry stony slopes from Caledon to Mossel Bay. T. occidentale is easily confused with it, but the latter can be distinguished by being more thinly stemmed in terms of its habit.

Perhaps one of the most distinct members of this family is the kraalbos (Aizoon africanum), which few people imagine belongs in the vygie or Aizoaceae family.

The Euphorbia family is large and widespread with most of its species originating from the tropics. Within the family is the genus Euphorbia, which is named after Euphorbus, who was the 1st Century physician of King Juba II of Mauretania. 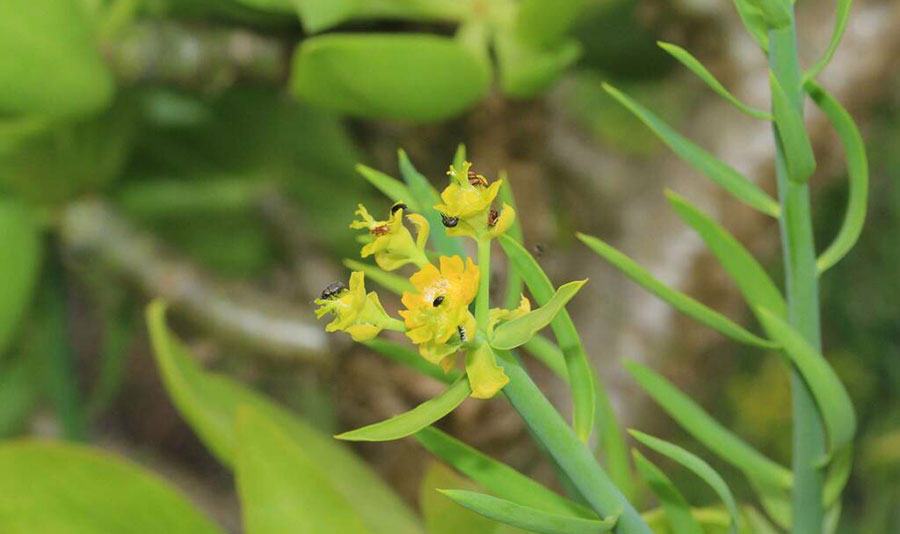 Perhaps the most often seen Overberg Renosterveld Euphorbia is E. mauritanica, which is a large spreading succulent shrub that can reach up to two metres tall.

The multi-branched and spiny Euphorbia nesemannii grows in cracks in the rocks on shale outcrops and lower gravelly slopes from Worcester and Robertson to Swellendam. 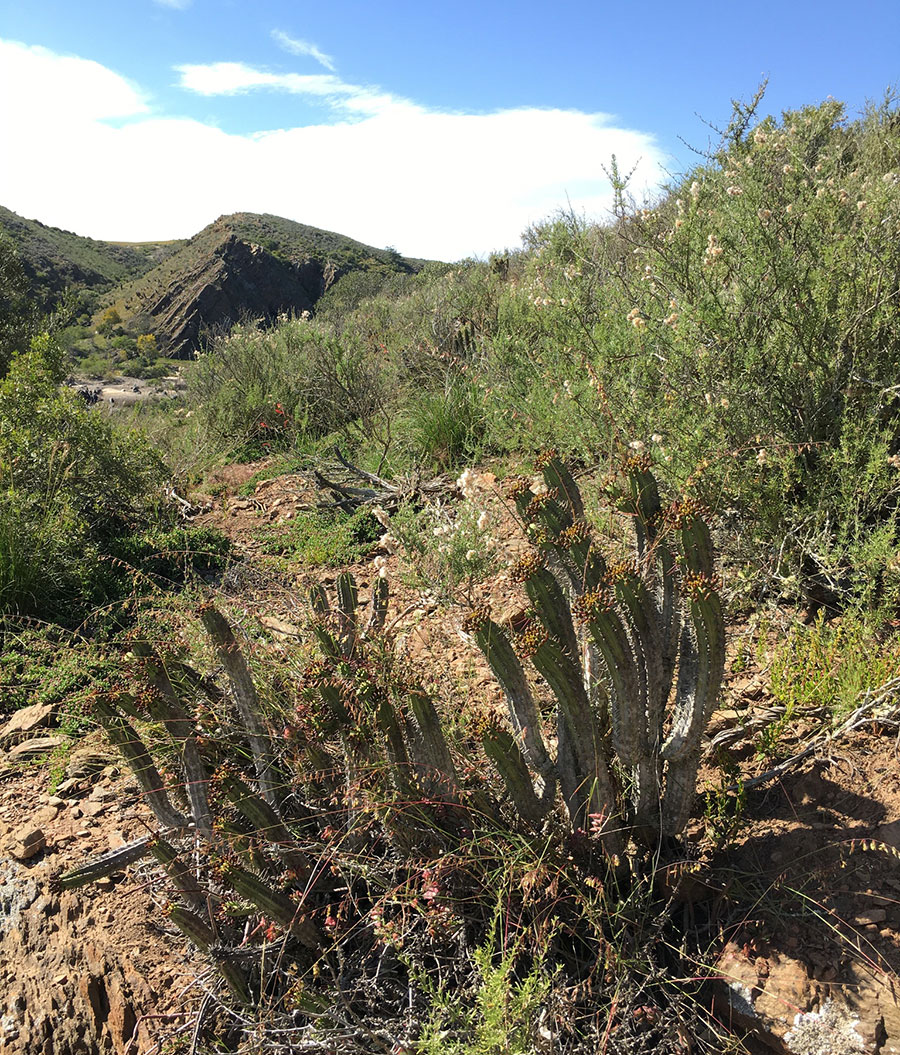 On steeper slopes from Montagu to Swellendam eastwards, look out for the unusual red and green flowers of the Tilt-head Aloe (Aloe speciosa). The rosette of leaves is almost compass-like, because in most plants they tilt towards the north. 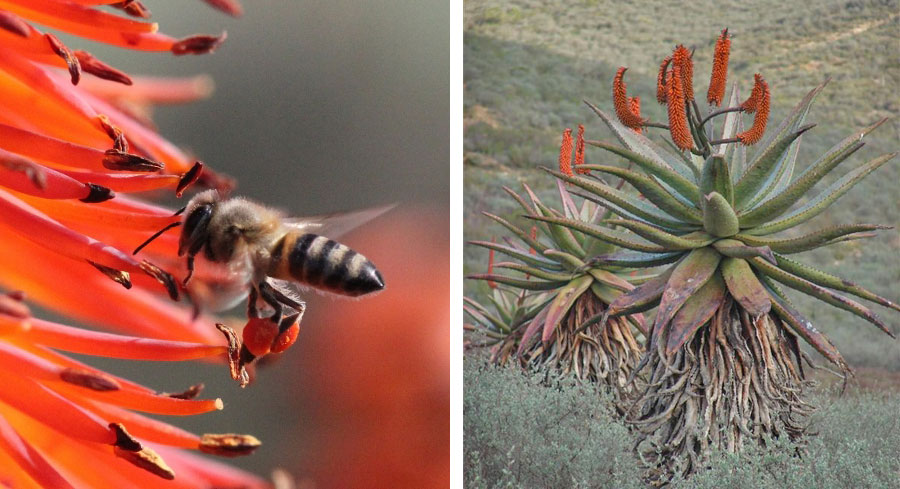 Also known as the Plakkie or Pennywort, the Varkoor (Cotyledon orbiculata) is a perennial succulent that reaches up to 40cm in height. It is widespread throughout South Africa.

The flowers hang downwards from the inflorescence and are red to pink in colour. They are often visited by sunbirds who feed on the nectar. Look out for the Varkoor in bloom from September through to December. 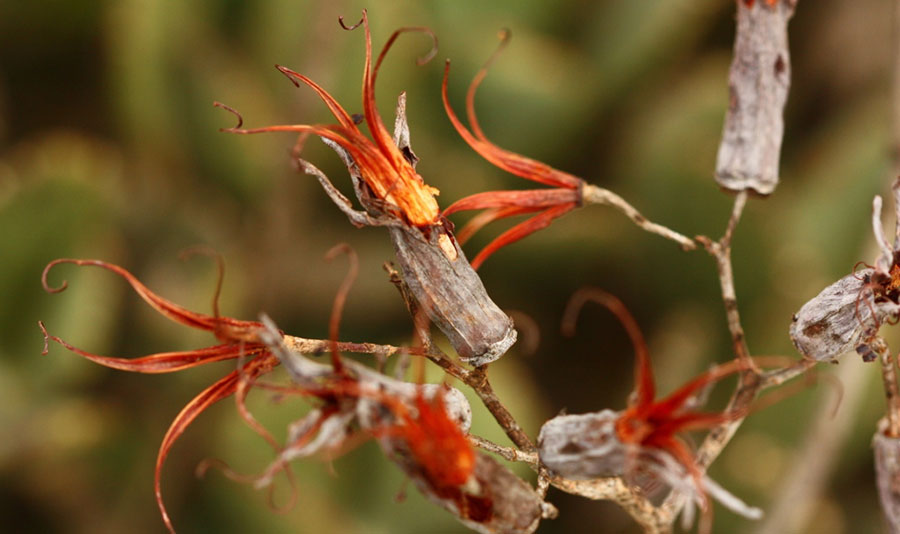 Above: Drying fruits of the Cotyledon sp.

Members of the genus Bulbine are known for having flowers that only last one day after they come into bloom. The widespread Bulbine lagopus is known for its medicinal properties, where the juice from the leaves is sometimes used to soothe rashes and insect bites.

The highly variable Bulbine frutescens is widespread in dry areas throughout southern Africa. Its flower colour is extraordinarily varied, with blooms ranging from white to yellow and orange. 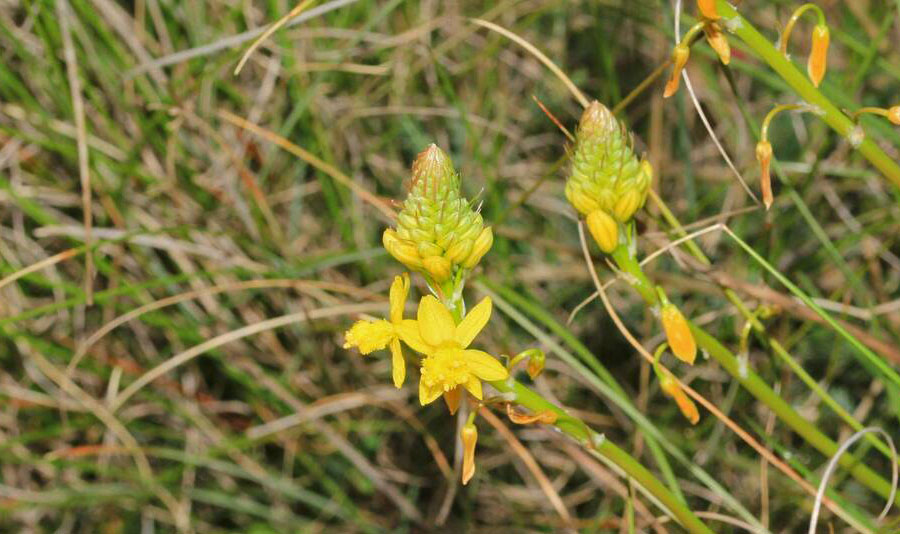 With houseplants being truly on trend, many will know the ‘String of Pearls’ (Curio rowleyanus) which is a favourite for indoor growing. However, few people realise that the Overberg Renosterveld on our doorstep is also home to some equally beautiful members of the genus. 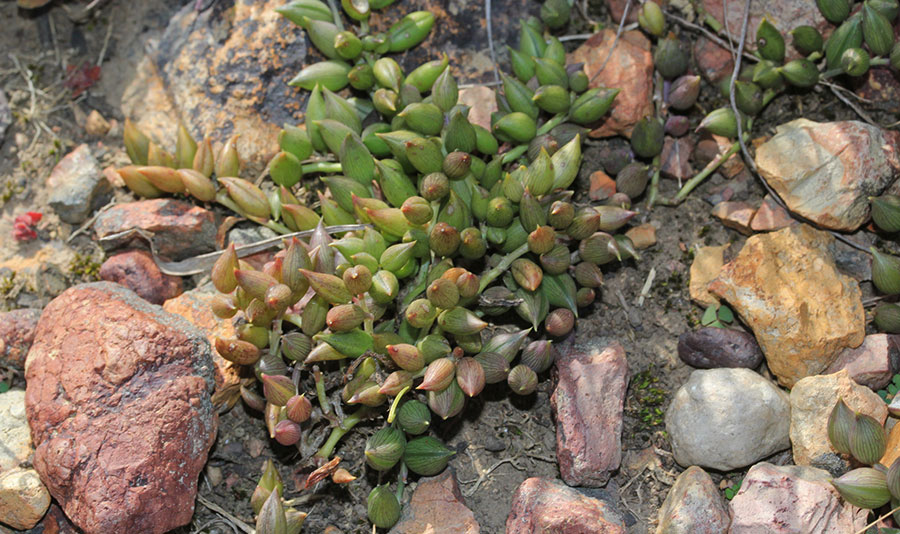 The genus name Curio means ‘curious’, which refers to it being closely related to Senecio which is also a member of the Daisy or Asteraceae family. The tiny Bobbejaantoonjies or Vingertjies (Curio radicans) grows in a sprawling habit and avoids the harsh summer sun by growing in the shade of other shrubs.

The sprawling succulent shrub Curio archeri is named after English succulent collector Joseph Archer, who was the station master at the tiny Karoo railway town of Matjiesfontein and who later became the first Curator of the Karoo National Botanical Garden. 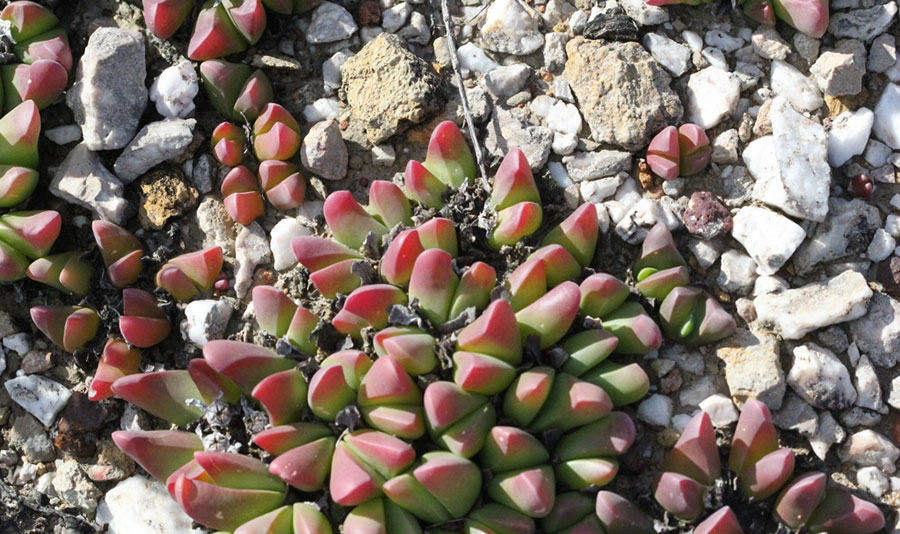 Steep fines and jail time may be faced by those caught stealing plants or plant material from the veld and on the ground enforcement to catch plant poachers is becoming increasingly widespread, including in rural areas and on private land.

All cultivated plants should be purchased from responsible suppliers and the necessary permits should be obtained for growing and transporting plants and material from threatened succulent species.

It is vital that we work together and join hands in conserving our extraordinary succulent biodiversity, while keeping wild plants as part of our natural heritage in the wild as vital components of intact and biodiverse Renosterveld habitats.

Help us to monitor our extraordinary and highly threatened Renosterveld succulent plant diversity to keep it in the wild as we expand our conservation easement footprint by considering donating to support our vital work. You can also support our work and learn more by purchasing the fascinating ‘Field Guide to the Renosterveld of the Overberg’ from our online shop. 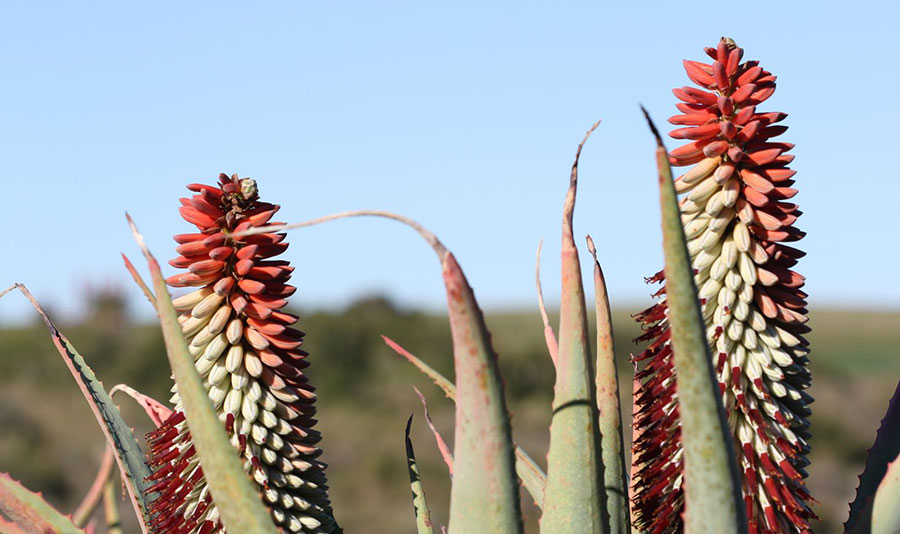