Three months in and I was still not 100% sure what Renosterveld looked like. But that is exactly the point. I’ve seen the Renosterveld remnants hanging on in the kloofs and on the koppies. But the Renosterveld on the flat areas is gone; the remaining veld often altered by generations of overgrazing. 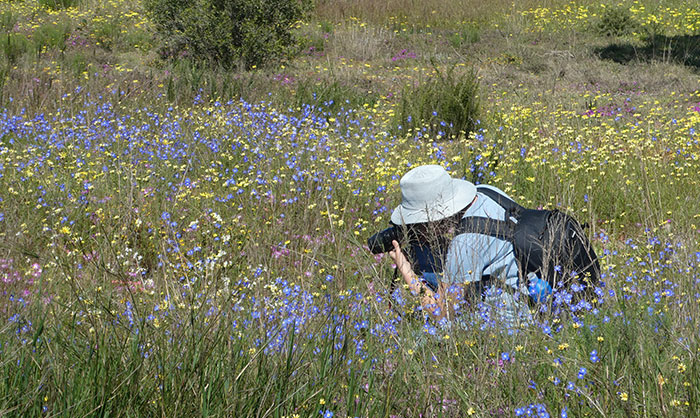 Underpinning that which remains is the fascinating geology of the region.

Bands of shale hardened by pressure or heat then folded and eroded have created the dramatic cliff faces and kloofs in the otherwise rolling agricultural landscape. When the Renosterveld is mapped, one can clearly see the extensive river drainage basins in place and names like the Sout River and Napkei River become living beings in the mind. The Sout River starts its journey north west of Napier and feeds the De Hoop Vlei. Many of the farms visited have unusual names of Khoi origin that often refer to rivers or water.

The koppies or the “dragon spines” are best viewed from the Spitskop road as one drives south towards De Hoop. A ridge of silcrete and quartz koppies extends west from the Potberg. With the setting sun prominent against dramatic skies, these are a painter’s dream. The truly astonishing views from Haarwegskloof itself and from sites visited, just the cherry on the cake. 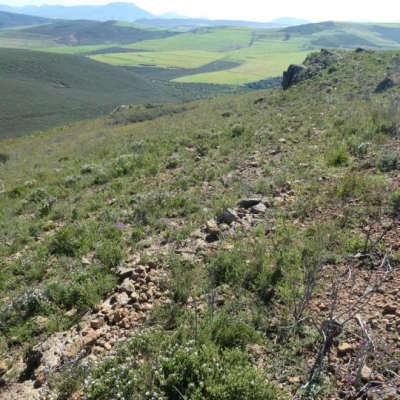 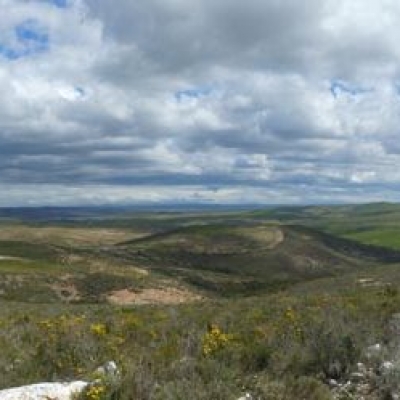 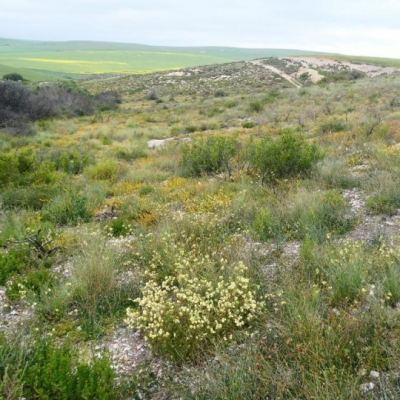 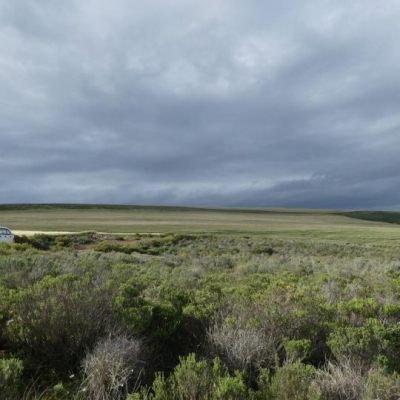 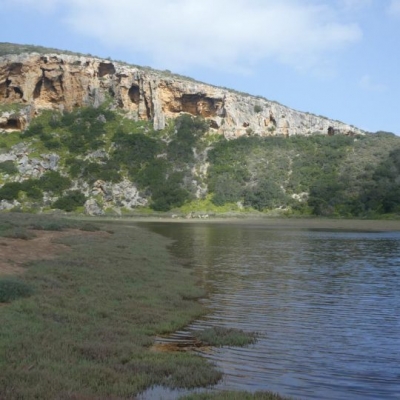 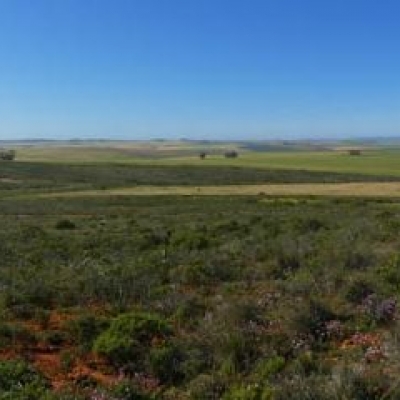 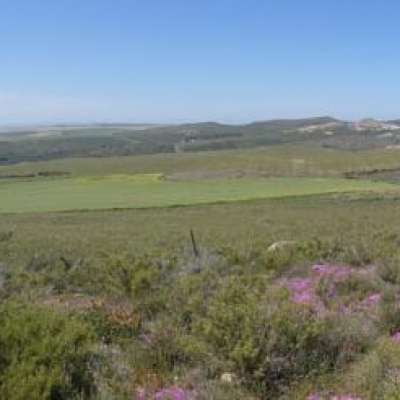 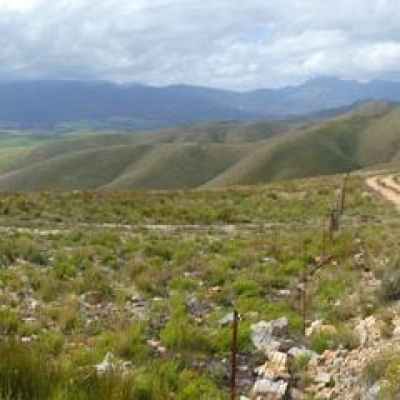 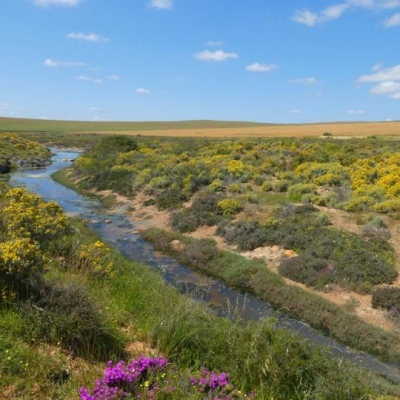 Needless to say, the myriad of geologies has given rise to fascinating plants perfectly adapted to the harsh summer conditions. I am a plant person first and foremost and revel in the beauty and design of plants both common and unusual.

Here are just some of my botanical highlights. 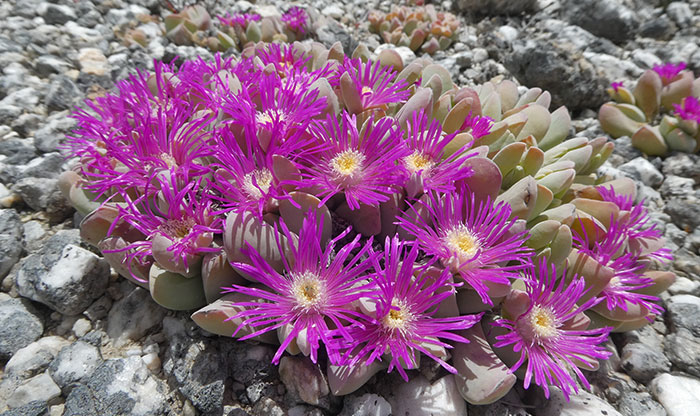 Seeing Gibbaeum hartmannianum in flower has been on my botanical bucket list for a while. It has neon pink flowers and milky smooth leaves sculpted into the quartz pavements. 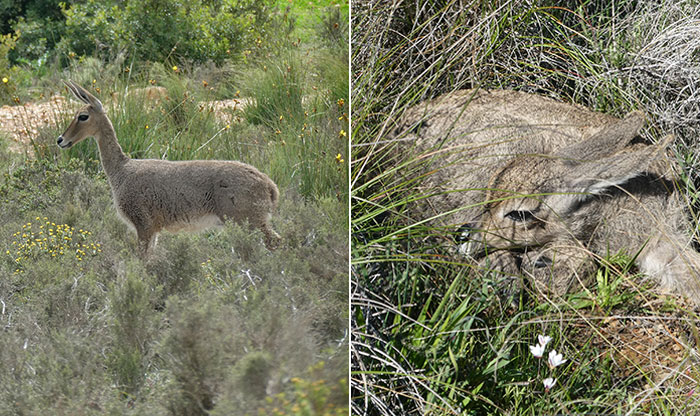 Several times I would cross a ridge and then hear the short, sharp ‘bark’ of a Vaalribbok, Grey Rhebuck (Pelea capreolus). Only once did I catch them off guard as I was walking downwind of them. On another occasion I stumbled across this young animal, lying motionless except for the fluttering of eyelids. 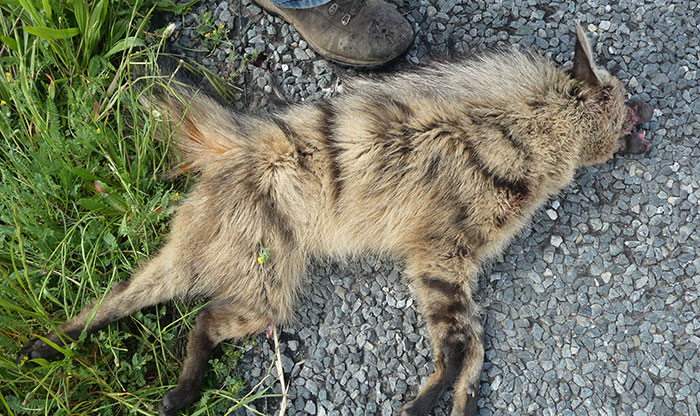 Seeing an Aardwolf or Maanhaarjakkals (Proteles cristatus): An infrequently seen animal and a first for me, this one was unfortunately killed on the road between Napier and Caledon. 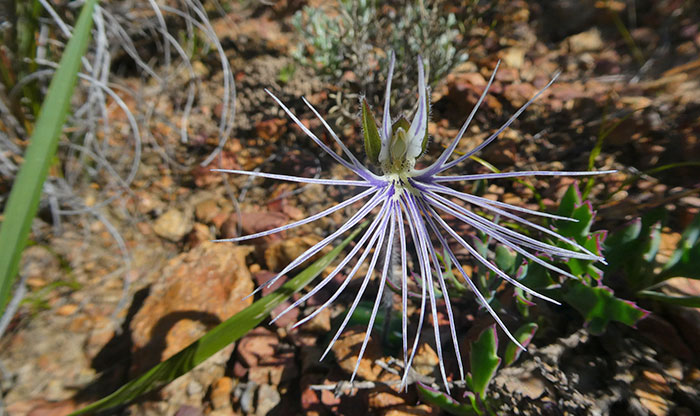 We visited a number of interesting burn sites across the Overberg and at one counted ten different species of Hermannia. These highly fragrant yellow and red flowers resemble miniature roses. At another burn site I found my first Spider Orchid (Bartholina burmanniana) in the wild.

But the world of conservation is not just about the beautiful, and sometimes reality comes along too.

It wasn’t all good news, and sometimes the loss of Renosterveld following decades of change and over-use is evident. Transformation for agricultural purposes remains one of the biggest threats (which in turn can lead to other management challenges, such as erosion). Over-grazing is also sometimes clearly seen, as is the incorrect use of herbicide. 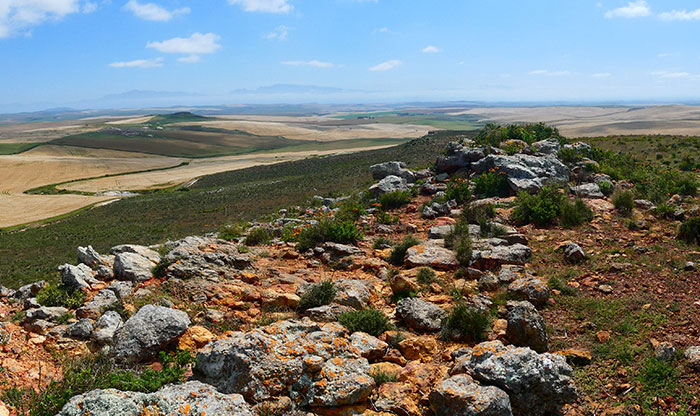 The value of conservation easements:

It has been a privilege to help Odette and Grant with the spring plant surveys of properties that have signed easement agreements with the ORCT. It is the first time I had heard of this approach in conservation that places a restriction on the title deed on defined areas to conserve the Renosterveld in perpetuity. 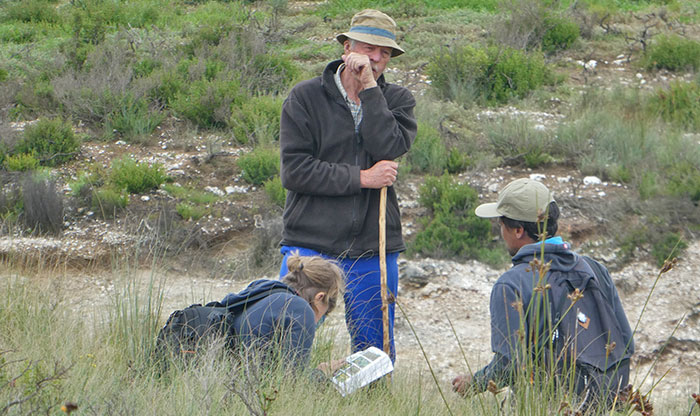 One of the pleasures of staying at Haarwegskloof Renosterveld Reserve has been meeting the various researchers as they pass through. I’ve experienced many highs, from the daily excitement of new moss species encountered, to the capture, tagging and releasing of Blue cranes; from the making of cheese, to the jet engine after-burn of Picanha steak on an open fire.

During my stay, I saw the close approach of the planet Mars in October, and the early rising of the moon across the wheat fields. I have watched as the wheat ripened, as it danced in the wind, as it was cut and harvested. I’ve been stuck behind flocks of sheep on the gravel roads, and watched the shearing of sheep. I’ve seen the bare fig tree on the stoep enveloped in green. I’ve driven in the early morning through the mist that blankets the landscape, and in the dark behind combine harvesters flashing like alien spaceships. 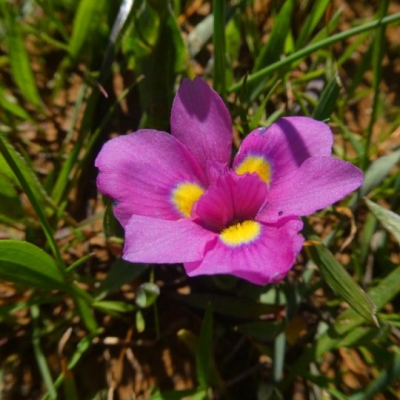 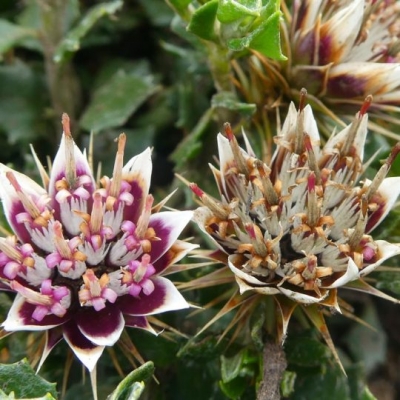 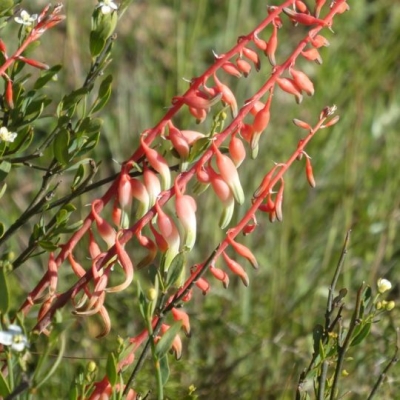 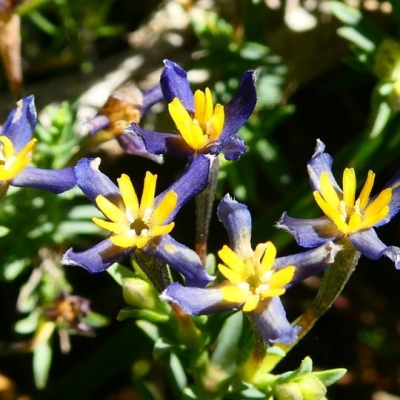 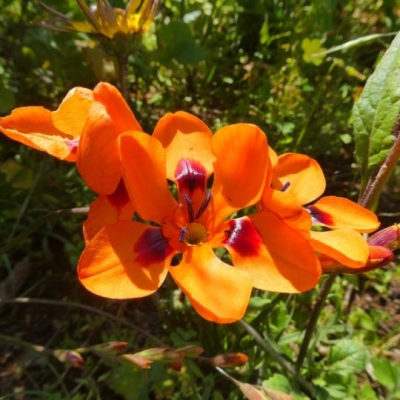 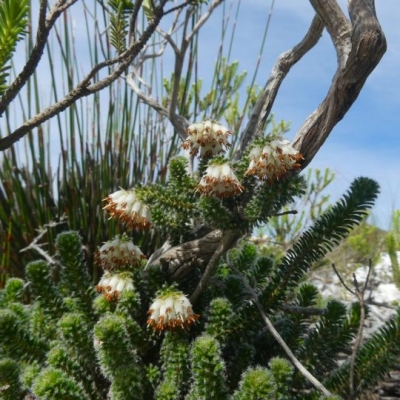 I would like to thank Odette and Grant for their cheerful company and conversation during the marathon fieldwork season this spring. I have really learnt about the Renosterveld and Odette’s book about the Overberg has been the perfect companion. I have also come away feeling more inspired about “my” own local pieces of Renosterveld and am looking forward to making a more thorough study of them.