You are here: Home / Renosterveld News / Roses are red, Violets are blue, what red flowers does the Renosterveld have to show you?

The colour red is world-famous for being symbolic of this celebration, being associated with passion, romance, love and high status. Red roses have become a quintessential symbol of Valentine’s day. But who knew, right on our doorstep, that our local Overberg Renosterveld is home to many stunning red blooms of its own. In honour of Valentine’s Day we take a closer look. 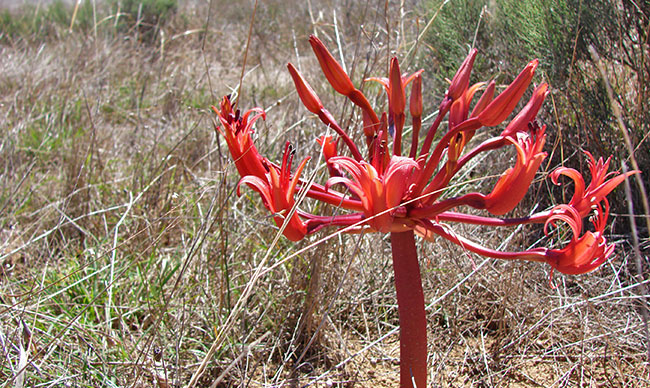 A bloom of one of the most intense shades of red found within South Africa’s Cape Floristic Region, Brunsvigia orientalis is one of the first blooms of the year to emerge in Renosterveld, growing from the dry earth from February to March after the first rains of autumn.

They are distributed from Namaqualand southwards to the Cape Peninsula and eastwards to Plettenberg Bay on the Garden Route. Brunsvigia orientalis  has a variety of common names, including the name ‘rolbossie’, so named because the dry flowerheads blow across the landscape in the wind, distributing the seeds far and wide.

This vygie is famous for its spectacular red blooms, which are pollinated by bees. These plants are referred to as ‘municipal workers’ as their flowers open in the morning at 9am and close by 5pm. A member of the Aizoaceae family, it is also known as the Worcester-Robertson vygie. Drosanthemum speciosum is distributed from Worcester to Barrydale where it grows on shale geology in Renosterveld, Fynbos and Karroid vegetation.

This species is one of the most spectacular succulents for use in the drier waterwise garden. They grow easily from both seed and cuttings, requiring moderate watering in summer and being kept dry during the summer months. 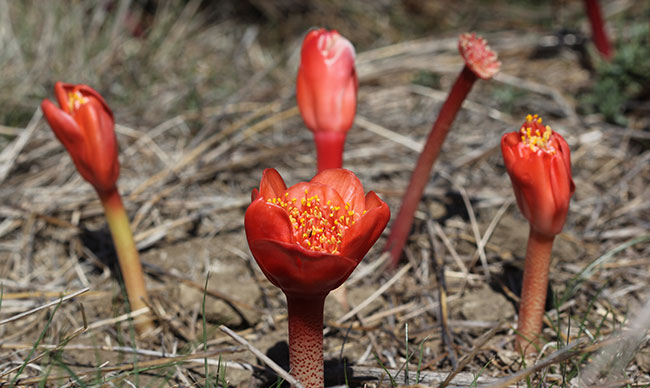 The spectacular red paintbrush-like flowers of Haemanthus coccineus emerge in the renosterveld from February to April. They are more commonly known as the ‘April Fool’. This species was most likely to be the first species to be collected from Table Mountain, seen illustrated in 1605 by the Flemish botanist de L’Obel.

Haemanthus coccineus occurs from southern Namibia down through the winter rainfall area of South Africa and eastwards as far as Makhanda (formerly known as Grahamstown) in the Eastern Cape.

The intense red blooms of this beautiful bulb look much like a tropical bird, with splashes of red visible in the renosterveld during spring where the highly threatened Gladiolus vandermerwei still survives. In fact, the flowers are pollinated by sunbirds. It was named in honour of J.S. Van De Merwe who first collected this species in 1928. He gave plants that he collected to P. Ross Frames for cultivation and pressed specimens were lodged in the Bolus Herbarium. Gladiolus vandermerwei was described as a new species by Louisa Bolus in 1933 where it was initially placed in the genus Antholyza. It was later revised to genus Gladiolus in 1989 by Goldblatt and De Vos.

This species is distributed from Botrivier in the western Overberg eastwards to Heidelberg in the east of the region. It grows in Overberg Renosterveld on shale derived soils in dry areas, as well as on quartzitic outcrops in the eastern Overberg.

Gladiolus vandermerwei has lost more than 80% of its habitat owing to transformation for agriculture and is now only known from around ten highly fragmented subpopulations with fewer than 250 plants each. It is therefore ‘Endangered’ on the Red List of South African Plants. 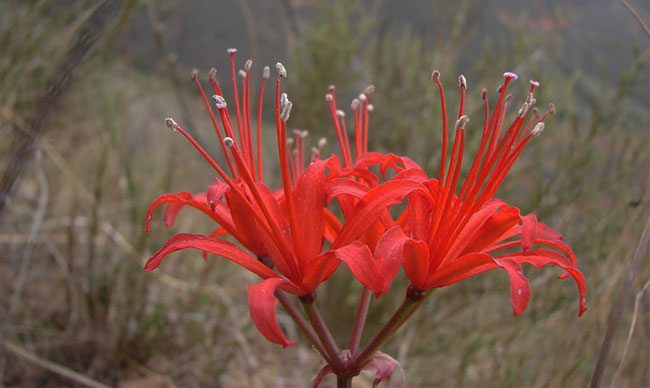 More commonly known as the Guernsey Lily, the species epithet of this beautiful bulb is named in reference to Sarnia, the Roman name for the English Channel island of Guernsey. Nerine sarniensis is however endemic to the Western Cape, found from Clanwilliam in the Cederberg southwards to the Cape Peninsula and eastwards to Caledon in the Overberg where it is found in both Fynbos and Renosterveld.

It flowers in profusion after fire and with diminishing frequency thereafter until the next veld fire moves through the landscape. Nerine sarniensis was introduced to Europe and first recorded in cultivation as early as 1634 in Paris and extensively cultivated on Guernsey by the late 1650s.