South Africa’s Fynbos Biome, of which the Overberg Renosterveld forms part, is famous around the world for its extraordinary plant diversity and high levels of endemism. But far fewer people realise that the Fynbos Biome is also home to an extraordinary diversity of insects, many of which are adapted to be specialist pollinators, targeting just a small selection of plant species.

Insects are some of the world’s most under researched organisms and also some of the most threatened, with numbers decreasing worldwide at an increasing rate, predominantly due to intensive agriculture and habitat loss. Many are believed to have become extinct even before entomologists have had a chance to describe them. If the insects are no longer there, the consequences would be catastrophic, leading rapidly to ecosystem collapse.

The Renosterveld of the Overberg is no exception, being home to a plethora of fascinating insects. Many of these are highly important specialist pollinators, but at present we know very little about what insects are there and who pollinates what. In particular there have been a dearth of studies undertaken at the community level, with just a handful of papers published on pollination in Renosterveld. We also know little about the effects of fragmentation on insects in Renosterveld and how it impacts on their ability to move between vegetation patches. 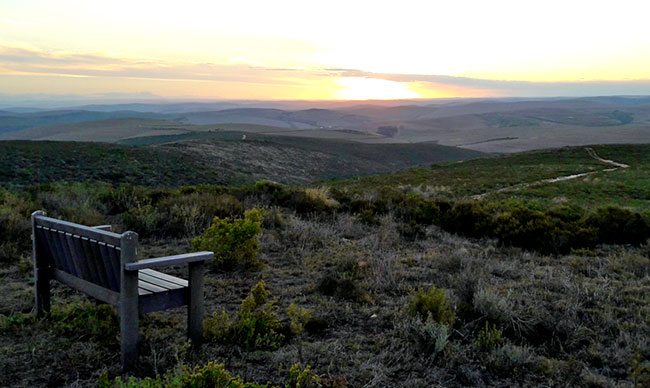 Above: View over Haarwegskloof Renosterveld Reserve

When the Overberg Renosterveld Conservation Trust was founded, a need for conservation and management focused research was rapidly identified, leading to the development of the world’s first Renosterveld research and visitors centre at Haarwegskloof Renosterveld Reserve. Our lively cohort of postgraduate students use the centre as a base to conduct this research, working on the reserve as well as farms across the Overberg.

Several of our more recent recruits have been working hard looking for answers to some of these pollination questions and we are gradually learning more about the secret lives of our Overberg Renosterveld insect pollinators. In this piece we will take a look at our solitary bees and bee flies, curious and fascinating insect pollinators. 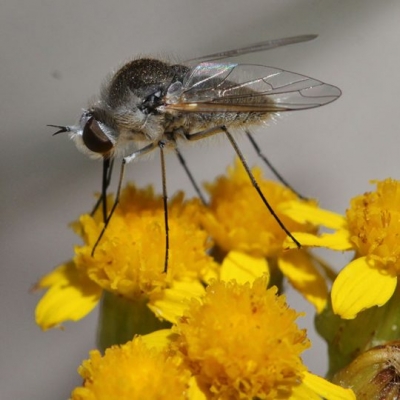 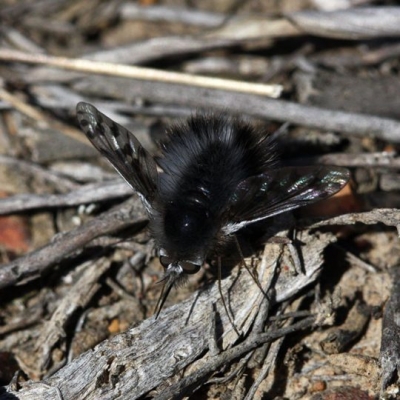 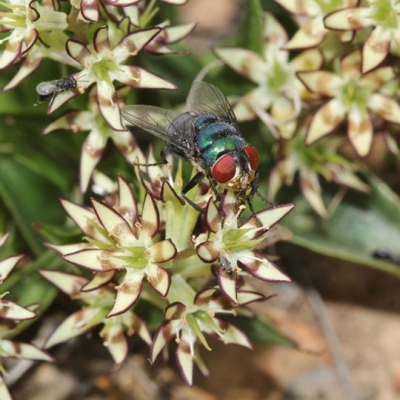 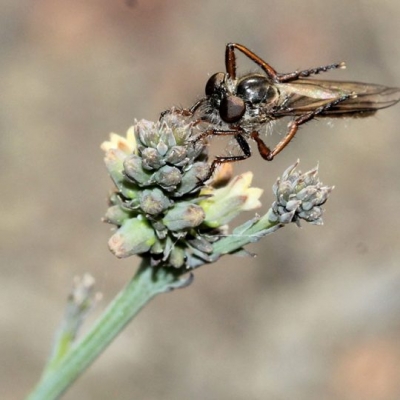 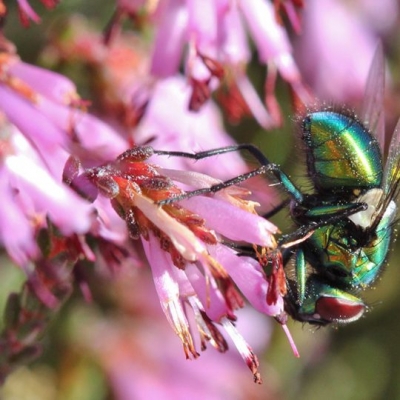 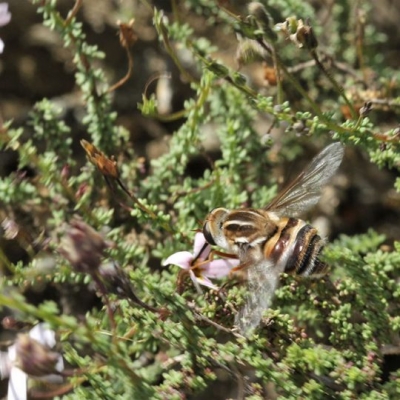 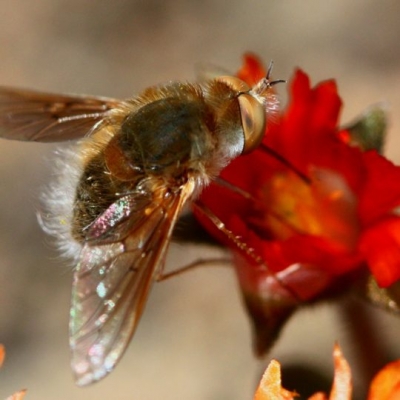 There are thought to be around 3000 bee species in Sub-Saharan Africa, of which about a third occur in South Africa. Around ten (just 0.3%!) of these species make honey and are the most well-known of the bees. The remainder are non-honey making and are known as solitary bees. Solitary bees are likely the most important pollinators in South Africa, both economically as pollinators of crops and ecologically as pollinators in our veld.

The majority of bees in South Africa are solitary bees. They are referred to as being solitary because the female bees build and inhabit their nests alone. Some carry pollen in a different way to honeybees as well, with advanced hair-like structures on the underside of the abdomen. An example of this are Melittid bees from the family Melittidae, that are very abundant in the Western Cape, occurring in a variety of different habitats. They construct burrows in the soil, predominantly in open areas. Members of the genus Rediviva are known as Oil-Collecting Bees. They collect oils from flowers to mix with pollen. This process is facilitated by their specially adapted front legs, that are elongated to reach and adsorb these oils. Very little is known about these special bees in Overberg Renosterveld, but several plants which are known to depend on them for pollination occur here.

Above: Carpenter Bee on Lobostemon trigonus

Contrary to appearances, not every insect that looks like a bee is a bee. There are a few insect families that deceive and put off predators by looking like bees. Both Hover Flies (Family Syrphidaceae) and Bee Flies (Family Bombyliaceae) employ this strategy and are also important pollinators in Overberg Renosterveld. 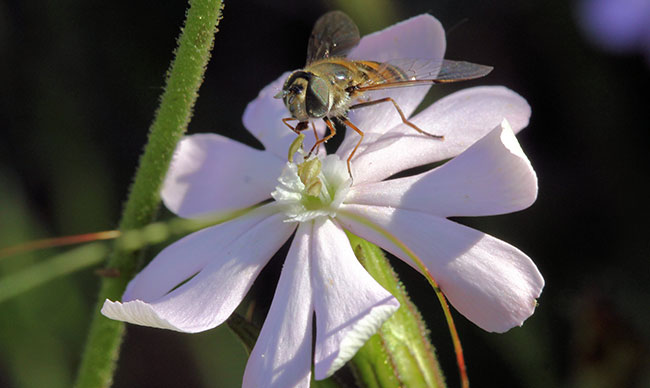 Above: Hover Fly on Silene undulata

Hover Flies are easily recognised by their yellow and black bee-like stripes and their precise hovering flight behaviour. The adults feed on nectar and pollen. The most common found in Overberg Renosterveld is Asarkina africana which has a widespread distribution across the country. They have a long proboscis that can be used for reaching deep inside long-tubed flowers.

Bee Flies in the Bombyliaceae family are more furry and rounded in appearance. They are the largest family of flies present in the region. White Tailed Bee Flies (Bombomyia discoidea) are found in Overberg Renosterveld and across the country. They are important pollinators for a diverse range of plant species and come in a variety of different colour forms. They also are known to parasitize Solitary Bees. Bee flies are most commonly spotted hovering around flowers during pollination and are most active during the hottest time of the day. 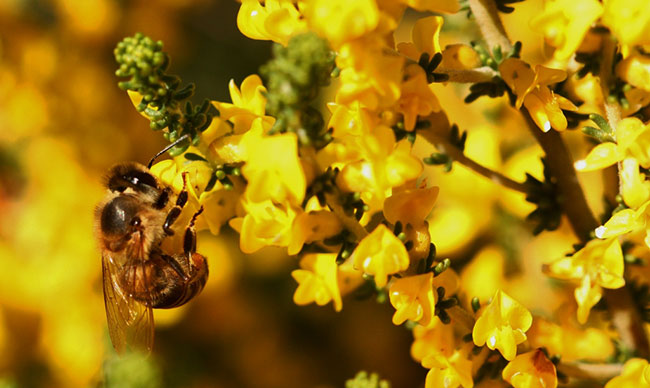 Above: Honey Bee on Aspalathus steudiliana

We still have much to learn about our Renosterveld pollinators, but we do know that Renosterveld couldn’t exist without insects such as these. Without pollinators the vegetation would become the ‘living dead’ eventually disappearing from our landscapes. This is something we cannot allow to happen and our Critically Endangered Renosterveld needs all the help it can get. Improving our knowledge through research will help us to best conserve what little is left for the future.