The Renosterveld of South Africa’s Overberg is one of the world’s most species diverse yet threatened ecosystems. From a distance, this vegetation looks predominantly grey in colour, but a closer look reveals a phenomenal diversity of different flowers in a plethora of different colours.

One of the most interesting and diverse of these plant groups is the Pelargoniums. Adapted to grow in the most challenging of growing conditions, members of the genus have a variety of different growth forms.

For example, some have thick succulent stems, others are geophytic, meaning that they have an underground storage organ from which they grow. 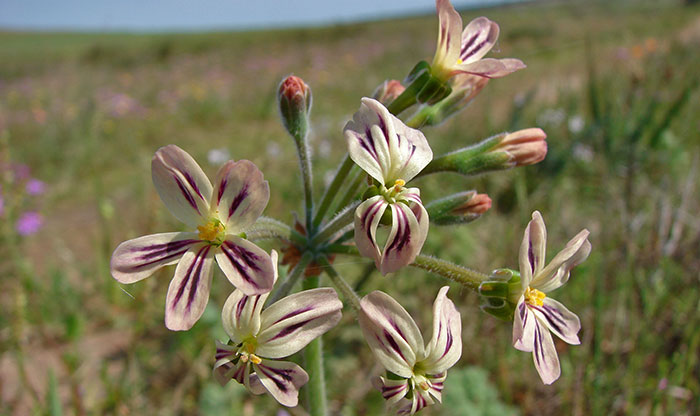 Even within some Pelargonium species there is significant variation, particularly in leaf form and flower colour. The latter indicates a highly complex relationship with their pollinators.

The Lady’s Mantle Pelargonium or Wildemalva is one of the most widely distributed Pelargoniums on the Africa. Found from the Cape Peninsula northwards to Kenya, Tanzania and Ethiopia, it is common in Overberg Renosterveld and often found growing in disturbed areas. 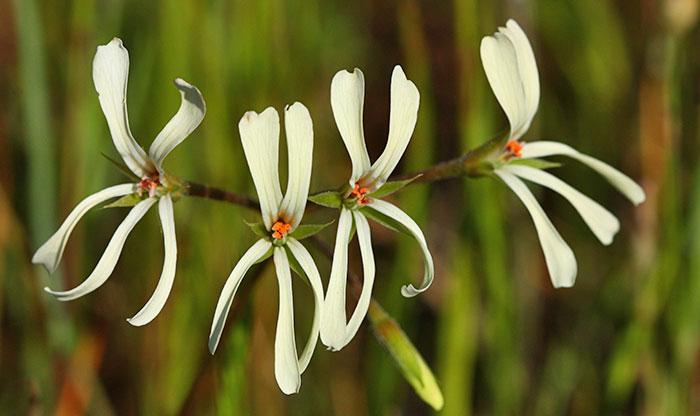 With its dark purple-black to pale pink or white blooms, this stunning geophytic beauty is hard to miss.

Its species epithet refers to the shape of the leaves, with the word ‘auritus’ meaning ‘long ears’. Pelargonium auritum is found in a wide range of habitats, distributed from Clanwilliam in the Cederberg to Gqeberha in the Eastern Cape. A geophytic species that grows from an underground tuber, Pelargonium caledonicum flowers during the summer months from December to January.

It has a relatively limited distribution, growing from Greyton to Napier in Sandstone Fynbos and Overberg Renosterveld. This species is Critically Endangered on the Red List of South African Plants due to extensive habitat loss from transformation for agriculture. 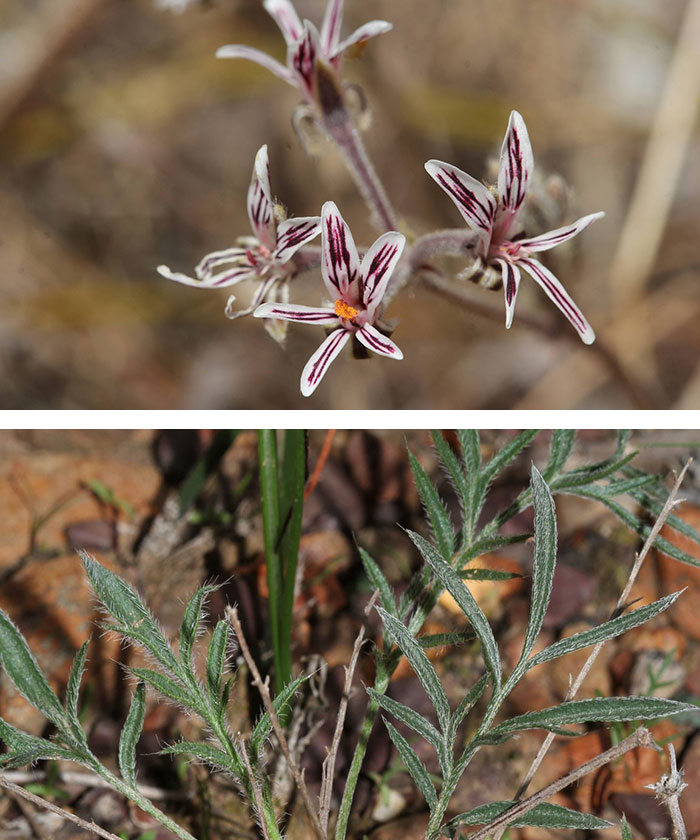 With a turnip-shaped tuber, Pelargonium carneum is a commonly found geophytic Pelargonium in Renosterveld. It is found growing on stony slopes from Elgin eastwards to the Gamtoos River in the Southern Cape. Flowering takes place during the summer months from November to March.

The crisp-leaved Pelargonium has delicate pink flowers and strongly lemon-scented leaves. The species epithet ‘crispum’ refers to the curled or crisped margins of the leaves.

This shrub flowers from August through to April. It is found on lower slopes that are rocky at the Renosterveld-Fynbos ecotone, distributed from Worcester to Montagu and Bredasdorp. 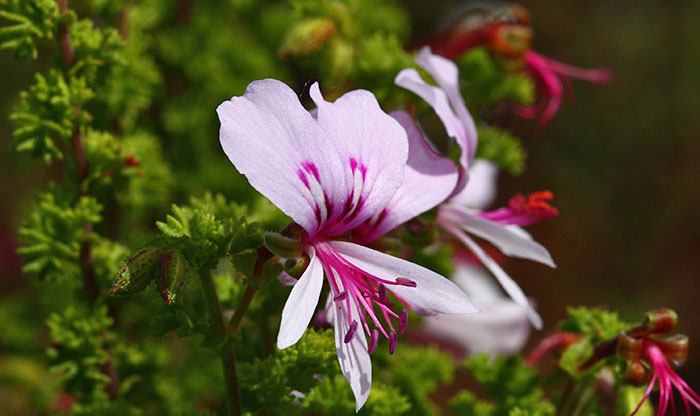 The large flat leaves of the vine-leaved Pelargonium or Kaneelbol are a common sight in Overberg Renosterveld. The tuber of this geophytic species is large and has a brown and scaly bark.

Flowering takes place from September to November with the flowers having a strong cinnamon-like scent. The aroma of the flowers becomes stronger at night, with this species likely being moth pollinated.

This creeping shrub is often found growing in Renosterveld. It has highly varied flower colour from white to pale yellow and pale pink, but the blooms always have red streaks on them.

Flowering takes place from August through to January. This species also grows on sandy soils and is found from the Olifants River mouth in the Northern Cape through to Stilbaai on the Garden Route. 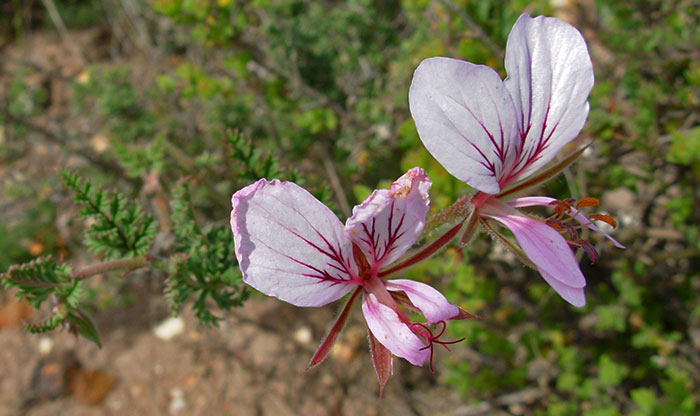 The pinnated Pelargonium is also a geophytic species that is often found on rocky shale outcrops in Overberg Renosterveld. The species epithet ‘pinnatum’ means ‘feathered’ or ‘winged’ in reference to the shape of the beautiful soft, grey leaves.

This species grows on slopes and flats on both clay or sandstone derived soils. It is distributed from the Cederberg southwards to the Cape Peninsula and eastwards to Albertinia on the Garden Route. Flowering takes place from November to March. 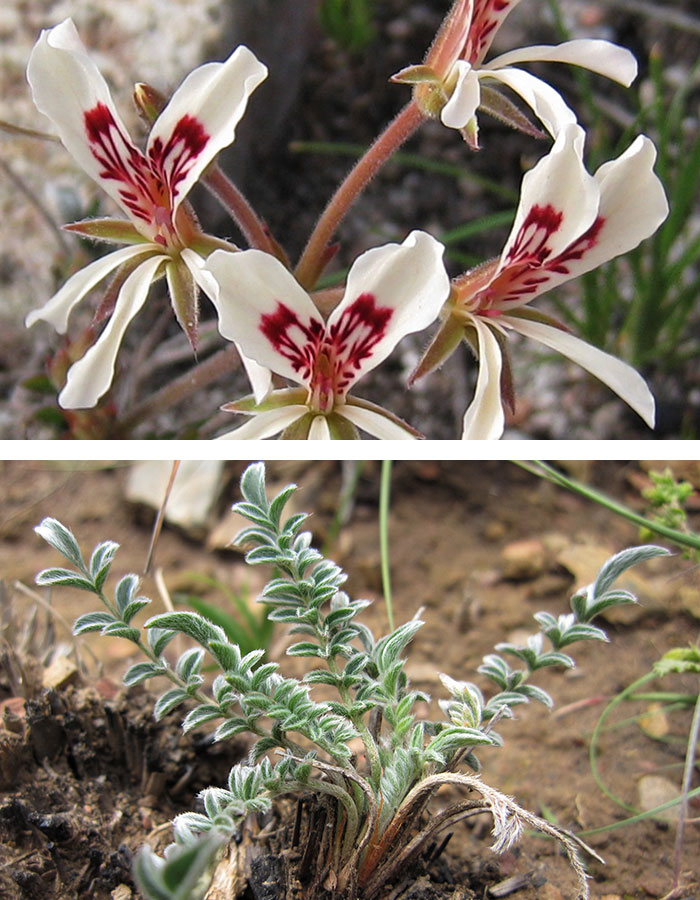 The night-scented Pelargonium, Kanneeljie or Rooiwortel was one of the first Pelargoniums to be taken to England from the Cape by John Tradescant in 1632. The species epithet ‘triste’ means ‘sad’ or ‘dreary’ in reference to the colour of the flowers.

Flowering from August to February, the flowers of this geophytic species are clove scented, with the aroma particularly strong at night. It is therefore likely that this species is moth pollinated.

Pelargonium triste grows on flats and lower slopes with clay or sandy soils. It is distributed from Namaqualand southwards to the Cape Peninsula and eastwards to Albertinia. 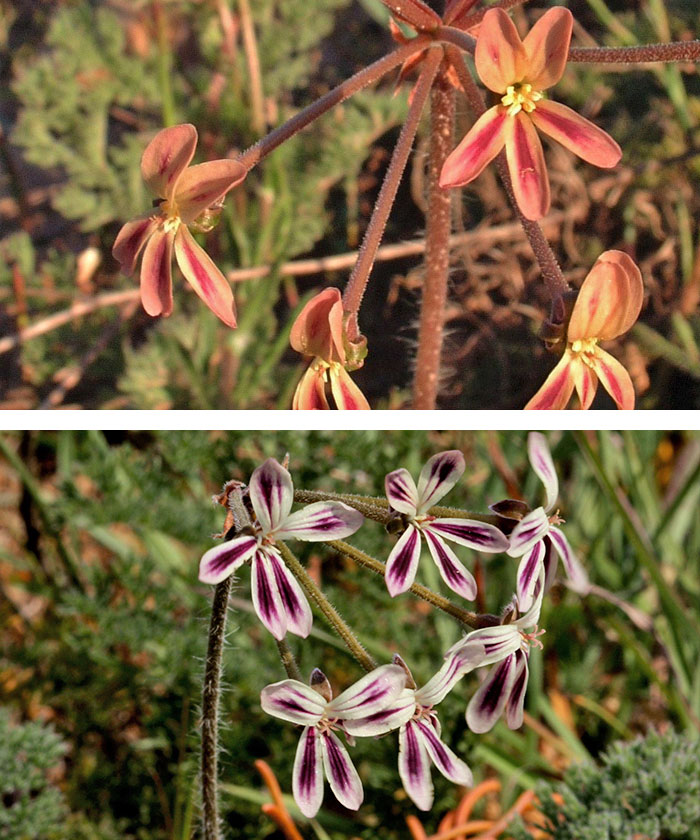 This cream-coloured Pelargonium was relatively recently described in 2016 by Elizabeth Marais from Stellenbosch University. It has not yet been allocated a Red List status on the Red List of South African Plants.

The species epithet is derived from the Greek words ‘xanthos’ meaning ‘yellow’ and ‘petalon’ meaning ‘petal’, in reference to its flower colour. It is found in shale derived soils from Worcester to Bredasdorp and Albertinia. Flowering takes place from September to November. 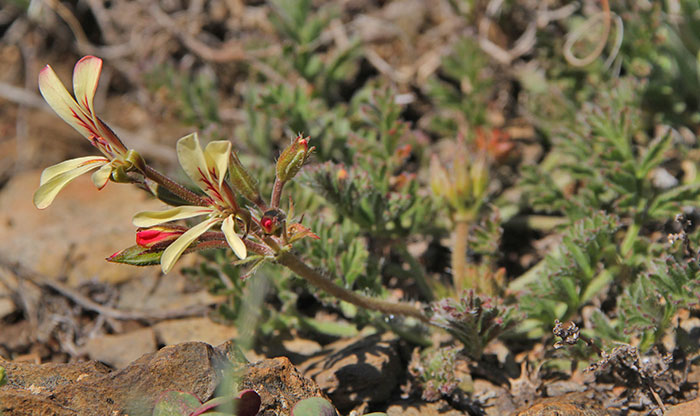