You are here: Home / Renosterveld News / Camera Traps as a Tool for Monitoring Threatened larger animals in Renosterveld

Over time habitat loss due to ploughing for agriculture has led to increasing fragmentation and space remaining for wildlife continues to decrease.

Above: A beautiful Grey Rhebuck (Pelea capreolus) ram shows his best side to our camera traps in the Overberg Renosterveld.

Many Renosterveld mammals and birds have increasingly become squeezed into smaller areas of habitat with relatively few ecological corridors of natural vegetation that allow them to move between areas of surviving Renosterveld for food and natural cover.

These beautiful and charismatic creatures form a key part of Renosterveld ecosystems, but they are becoming an increasingly rare sight in the lowland landscapes of the Overberg. It is vital that we undertake targeted conservation action to prevent local extinctions of these species in the Overberg lowlands.

With resources for biodiversity conservation becoming increasingly limited, it is important that we use a data-driven approach to appropriately direct conservation interventions.

Camera traps are a key part of the conservation toolkit for monitoring presence and distribution of threatened larger animals in Overberg Renosterveld. A camera trap is a camera that is triggered to take either photographs or video clips in response to movement. 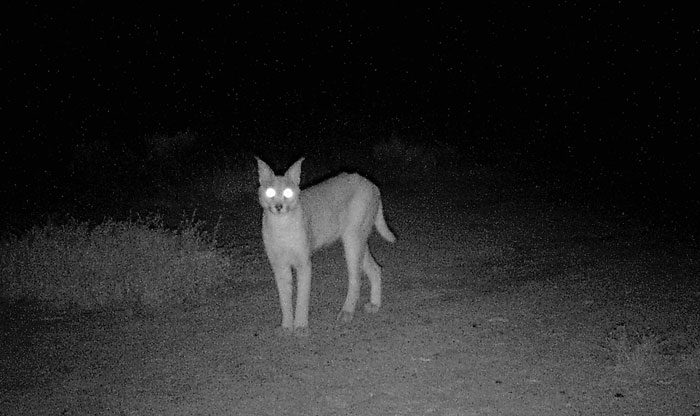 Above: Caracal or Rooikat (Caracal caracal) are sometimes photographed on camera traps in Renosterveld, where they hunt small mammals, such as rabbits and small buck.

Camera traps can be deployed into wildlife habitats to document what species may be present at any particular site. They can offer insights into wildlife behaviour that people may not otherwise be privileged to see.

Many of these mammals are nocturnal and relatively shy of humans, so camera traps allow us to monitor their presence 24 hours a day over relatively long timespans and across larger spatial areas. Their presence and behaviour can be recorded with minimal disturbance.

In recent years camera traps have become an increasingly affordable technology, allowing us to increase our wildlife monitoring footprint beyond the capacity of numbers of human boots in the field.

The presence of these camera traps have allowed the Overberg Renosterveld Conservation Trust to make a number of exciting discoveries. For example, we were able to confirm the presence of aardvark and aardwolf at Haarwegskloof Renosterveld Reserve, the world’s largest surviving area of lowland Renosterveld vegetation.

Above: Bushbuck rams (Tragelaphus scriptus) are generally solitary, and not easily seen in their preferred landscapes – forests and areas with trees that provide cover for them.

Camera traps are a highly valuable tool for recording what creatures may be visiting our easement sites. This data can then be shared with landowners to help them better understand the importance of the area of veld of which they are custodians. 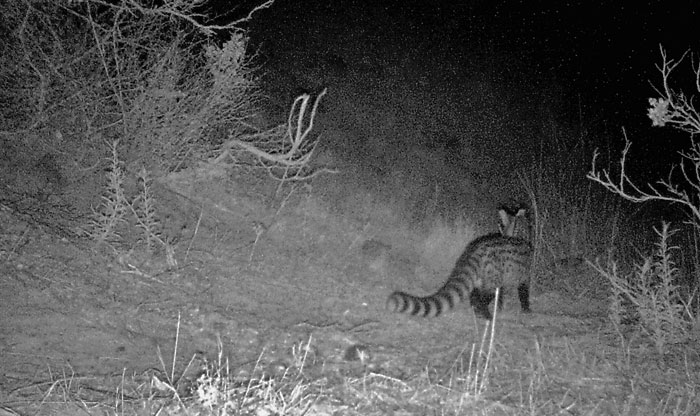 Above: Large-spotted Genet (Genetta tigrina) are generally only seen in the evenings or at night, when they search for prey, and are sometimes pictured by our camera traps.

This process of data collection is highly interactive and can instil a sense of pride for all those involved. We enjoy working with Renosterveld landowners as part of this journey of learning and discovery. Photos from camera traps are a very visual way of highlighting the importance of Renosterveld biodiversity.