You are here: Home / Renosterveld News / Ants of Renosterveld: From the fierce to the ‘freezers’

We’ve been able to confirm the presence of at least 11 species in Renosterveld to date.

Ants in this group fit the characteristic form of ants and vary in size from very small to large. They move rapidly, making photography extremely difficult. The Formicinae are known to be involved in myrmecochory (or seed dispersal) in Fynbos. The genus Anoplolepis, also known as the Pugnacious or Crazy ants, are fast-moving and hostile. When disturbed, they will attack instead of fleeing and even signal others to join the attack. They are very effective hunters and gatherers, working in large numbers to take down their prey and bring it to their nests.

The genus Camponotus – the Sugar ants or better known as Balbyters – are large, growing up to and larger than 20 mm. Species of this genus include some of our planet’s biggest ants. Its name refers to its flat back.

Pugnacious ants or Malmier are covered in fine hairs and appear very reflective. It is a common inhabitant of our region and causes problems in the agricultural sector as they tend to be destructive invertebrates (e.g. aphids). 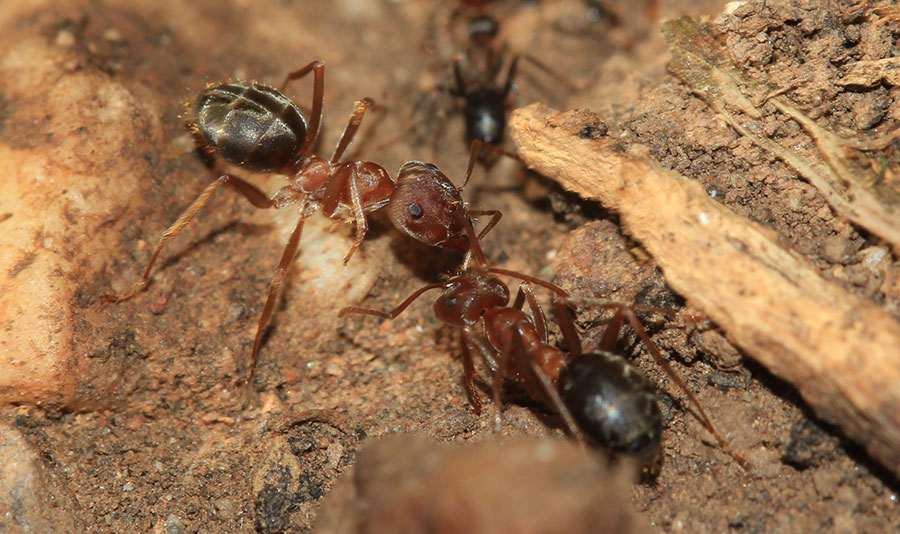 Small Pugnacious ants are like its relative, the Pugnacious ant, but are smaller in size and use a much wider range of habitats. They play an important ecological role as seed dispersers in Fynbos. 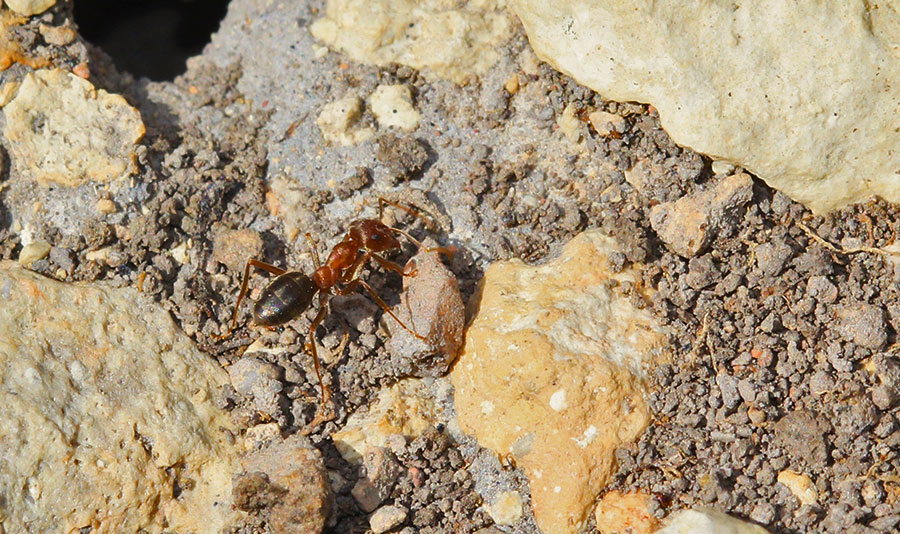 Orange Sugar ants are common species in drier regions. They are found nesting under termite mounds and are mostly active at night. When examined there appear not to be any majors present in the nest.

Common or Karoo Balbyter – Karoo Balbyters are common in arid regions, as the name suggests. They are characterised by their yellow-orange gasters – to which its species name refers. They are very aggressive and move rapidly, ready to attack. Although their eyesight is somewhat poor, humans are identified very quickly, a threat to which they respond rapidly. Nests are found underground with an obscure hole in the ground. 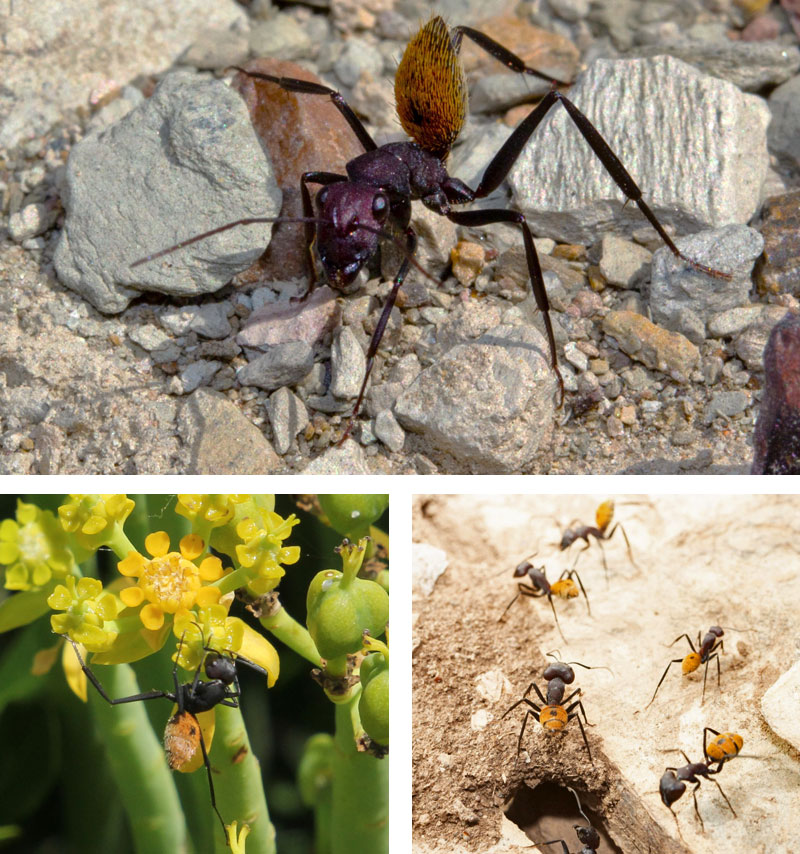 Hairy Sugar ant – This is one of the most common species of this genus and plays a very important role in Fynbos seed dispersal. They are uniformly black with characteristic white bristles that cover their bodies. It is common throughout southern Africa, found up to Kenya. 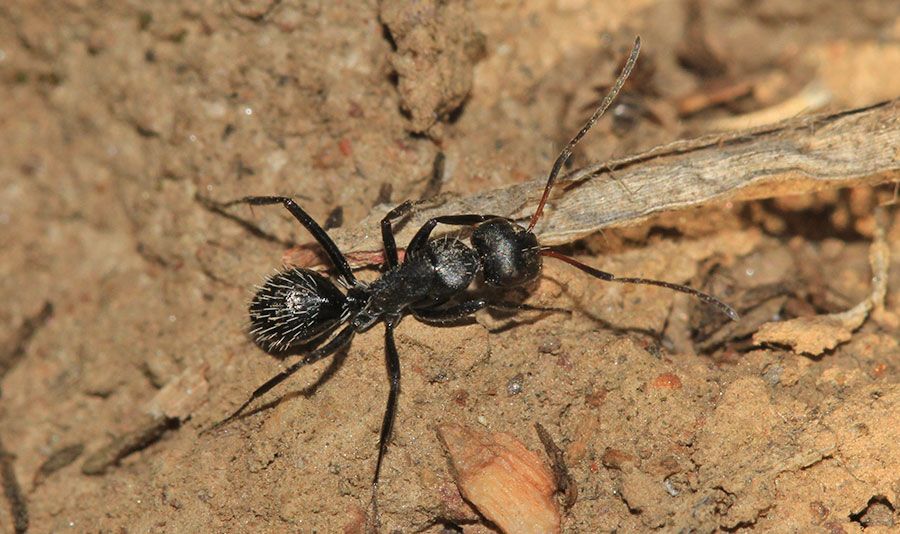 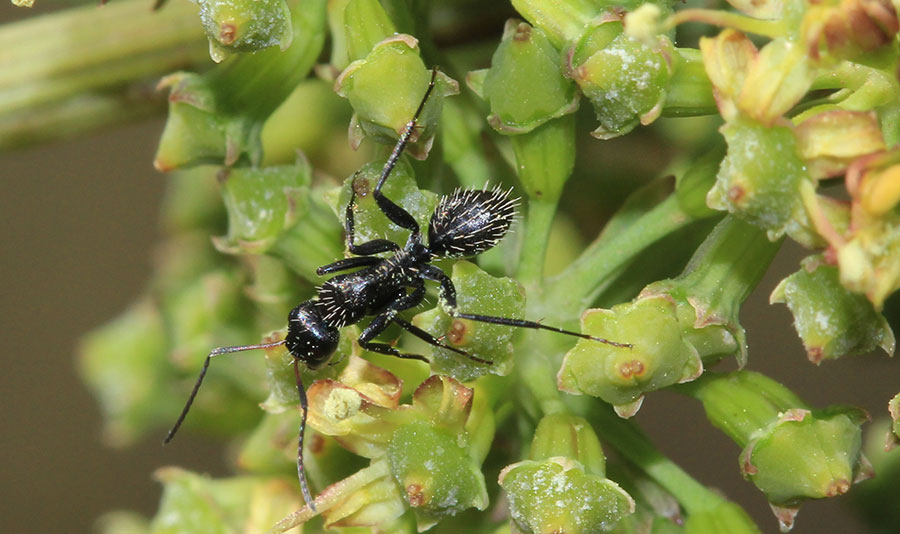 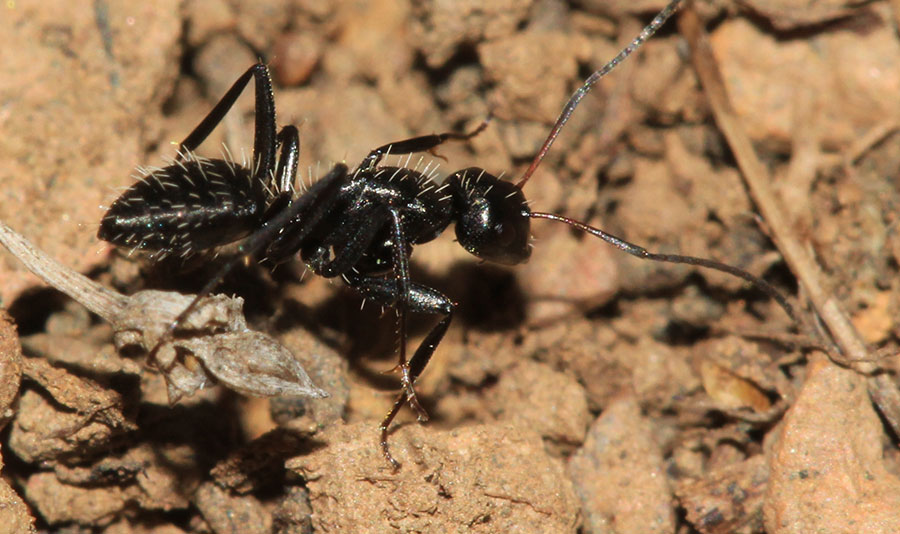 This is one of the largest subfamilies and can be identified from others by their double waists but they vary in several other features, behaviour and habitat. Numerous species are too small to identify with the naked eye and need to be identified with the help of microscopes. Thus far we have found four species in the Renosterveld.

Black Cocktail ant (Swart Wipgatmier) – This genus contains more than 500 species and representatives can be found on most continents. Cocktail ants or Wipgatmiere in Afrikaans can be identified by their gasters or tails whipping. The gaster ends in a sting which isn’t used for stinging but secreting volatile defensive chemicals at imposing threats. Black Cocktail ants specifically can be seen pouring out of carton-like nests which they build in the canopy of shrubs, ready to attack. The nest is made from chewed plant material that they ‘spit out’ building up the structure like paper mache. Five subspecies have been described. We have noticed this species on Aspalathus species as they feed on honey-producing insects and in return provide shelter and protection. 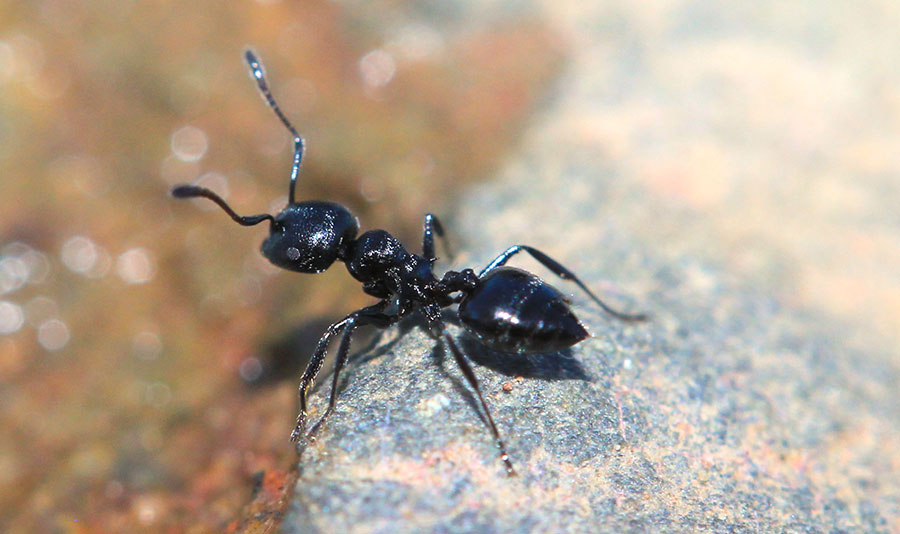 Common Harvester ant (Oesmier) – This very common ant is named after the Roman god, Messor, who was the god of crops and harvests. The name means ‘reaper’ in Latin. These ants are mostly granivores, making this name very fitting. Messor capensis is the most common species in the genus and produces large mounds of excavated sand. 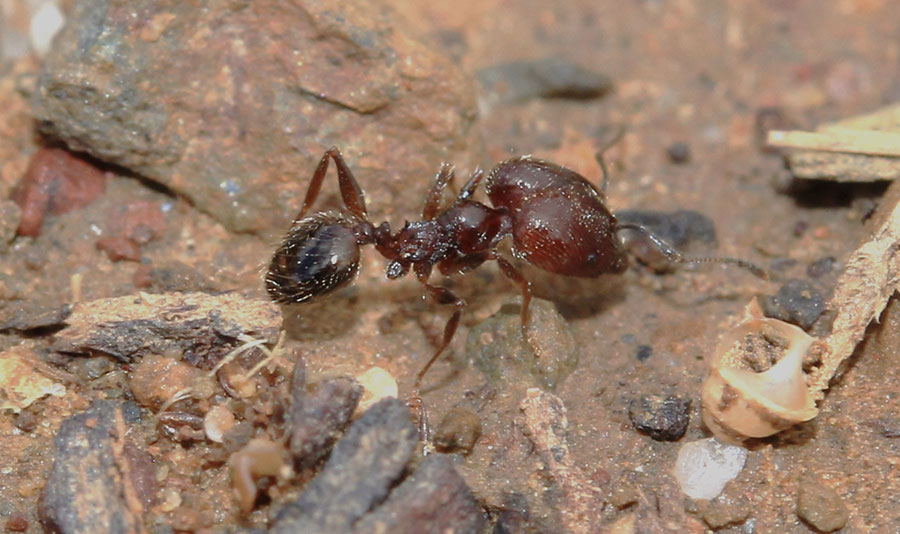 Brown House ant (Buin Huismier) – This genus can be found around the world, but what sets them apart is the large head of the major workers. They are omnivores and the large mandibles are used to cut up their prey. During hard times the minor workers could get rid of much larger majors to save on food consumption. The Brown House ant is quite small and needs a fine eye or microscope to identify it. It is common in numerous habitats with four sub-species, making identification very difficult below the species level. 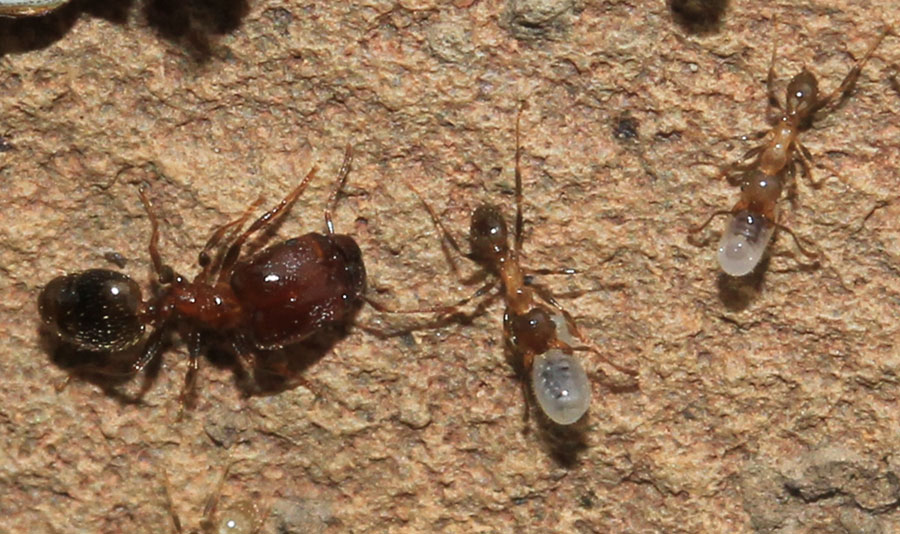 Garden Fierce ant (Tuin Kwaaitjiemier) – Tetramorium has only been recorded from Africa, Europe, Asia and Australia, with the highest diversity on the African continent. The Common Fierce ants have a very wide distribution throughout Africa and into the Middle East and could be found in gardens and parks, in and around homes, plantations and various natural habitats. Garden Fierce ants are known to nest in small colonies on the ground. And here’s a fun fact – they freeze upon aggressive behaviour by other ants. 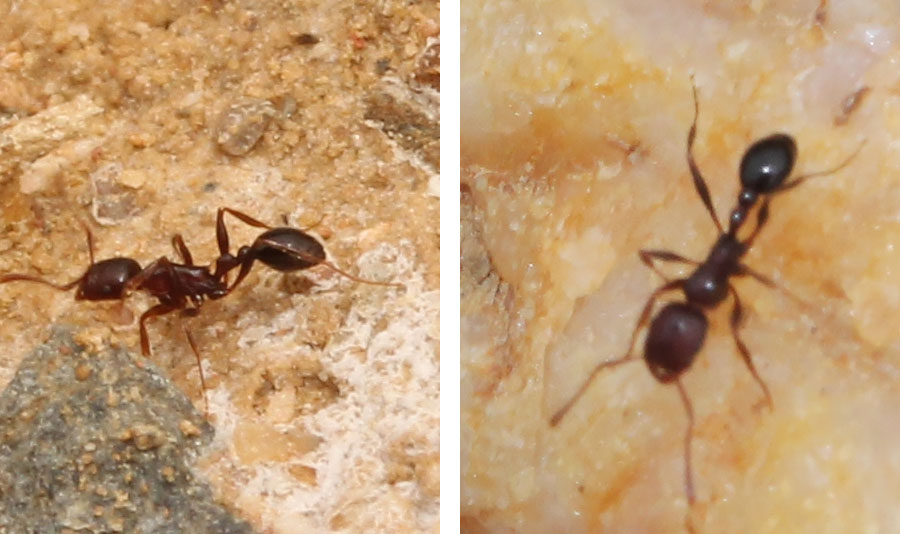 As this species name suggests, species of this genus are all elongated and adapted to live in hollow stems. Some species are only found on specific plants. It is the only genus recorded in our region in this subfamily with nine species and two subspecies. 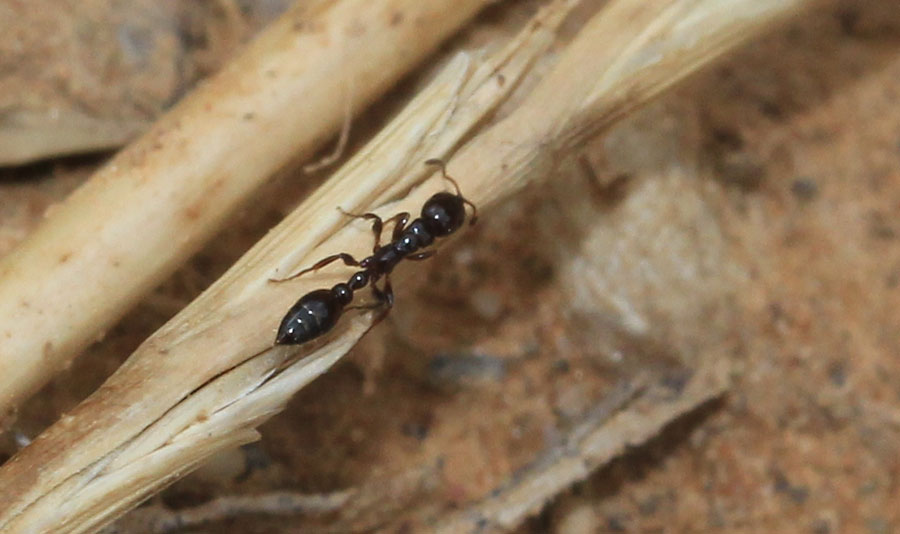 This subfamily is distinguished by large gasters or tails with a conspicuous constriction as if tied off. They are fairly large and all species have well-developed stings that they use for self-defence, apparently causing some discomfort. Recent studies have indicated that this subfamily could be involved with the seed dispersal of Restioids but is still poorly understood.

Ringbum Millipede muncher (Riemgatduisendpootvretermiere) –The species we observed is of the Plectroctena genus of which 16 species have been identified in Sub-Saharan Africa. This could arguably be our largest ant measuring up to 24 mm. They live in small subterranean colonies of up to 50 individuals and predate on millipedes, beetles and termites and have been recorded as far north as Ethiopia. 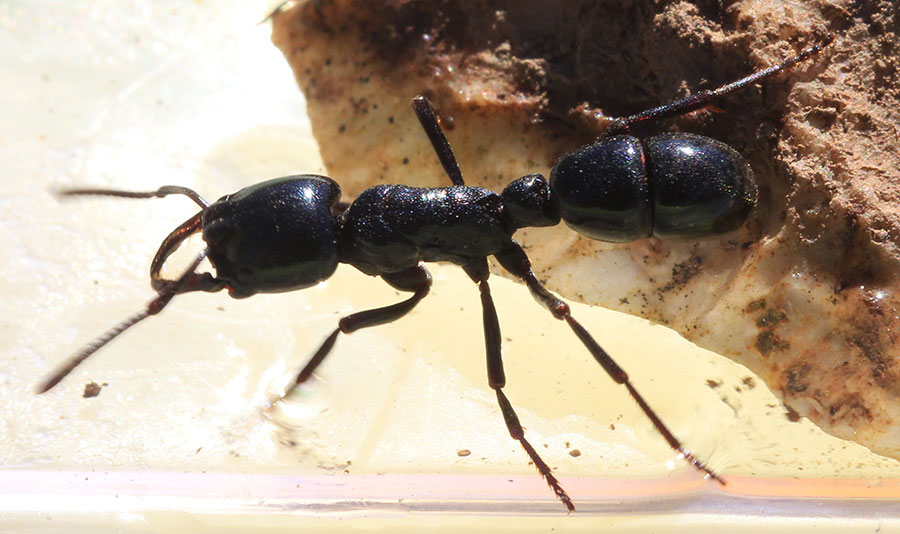 A big thank you to Peter Slingsby and other identifiers on iNaturalist. Ants of Southern Africa by Peter Slingsby has also proven to be such a useful field guide when studying these tiny animals that occur in Overberg Renosterveld. Our thanks also to Suretha Dorse for all her insight and sharing her passion.