Effective conservation informed by a deep knowledge which has been built on research has always been at the core of the work of the Overberg Renosterveld Conservation Trust (ORCT).

It is through this that I have collaborated with the ORCT as part of their postgraduate research group, undertaking my PhD research in the University of Cape Town’s Department of Biological Sciences, supervised by Associate Professor Samson Chimphango, Professor Timm Hoffman, Professor Muthama Muasya and Associate Professor Pippin Anderson. The project was funded by South Africa’s National Research Foundation (NRF). 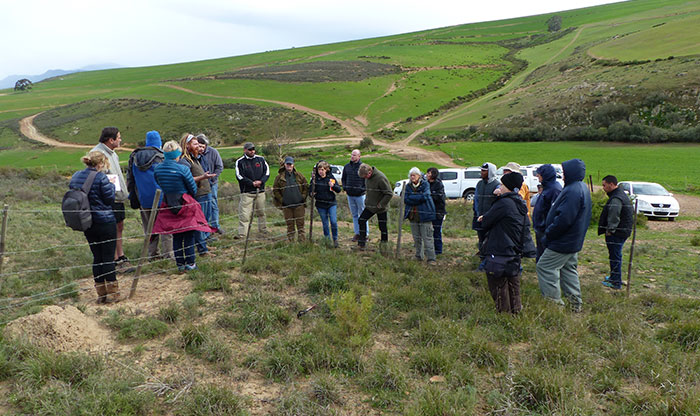 Above: Reporting PhD research results at one of a series of farmer’s days hosted by the Overberg Renosterveld Conservation Trust

The title of my PhD is “Conserving living landscapes: Investigating the impacts of livestock grazing and assessing rangeland restoration potential in Overberg Renosterveld, South Africa.” My PhD journey is now complete, having graduated in December 2021.

My research has encompassed Renosterveld on farms across the Overberg, from Botrivier eastwards to the Heidelberg and Suurbraak areas, with a focus on Renosterveld on shale geology. I would like to thank the wonderful farmers who have welcomed me onto their land to do my PhD research over the five years that I was collecting data for the project. 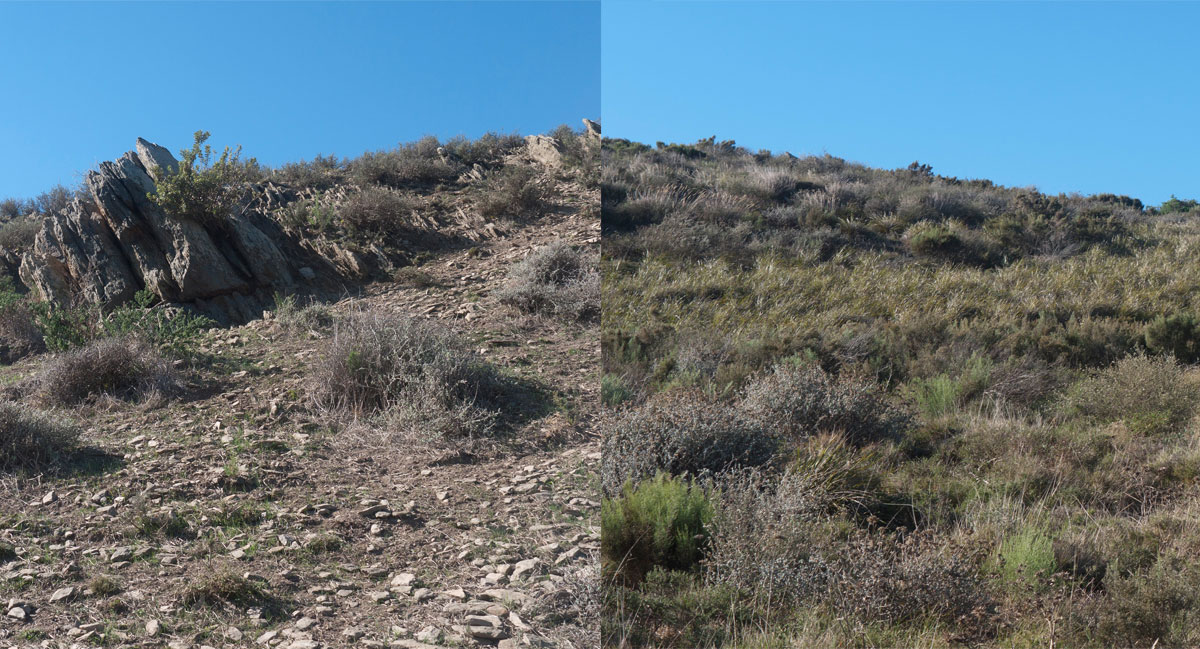 The study is one of the first data-based analyses on the impacts of livestock grazing on Overberg Renosterveld, as well as examining the extent to which seeds surviving in Renosterveld soils can help us with ecological restoration of this critically endangered vegetation after overgrazing. 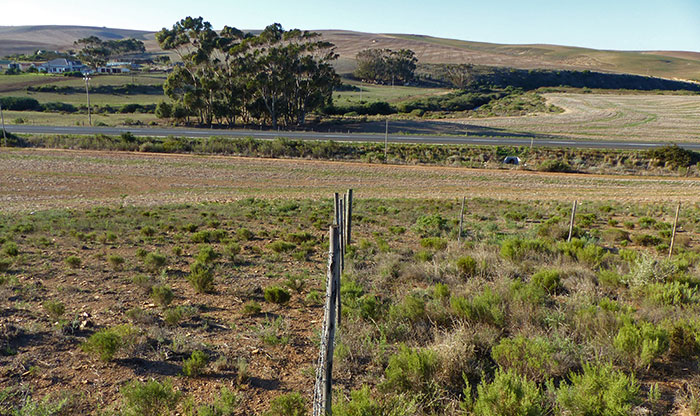 Above: Fence line contrast showing inside and outside one of the grazing exclosures from the study in Western Ruens Shale Renosterveld vegetation. 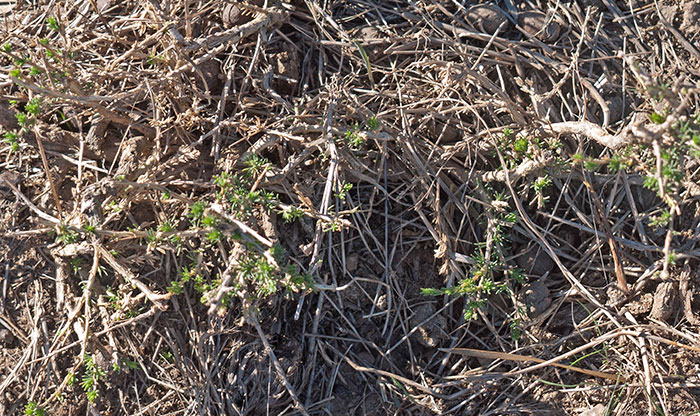 One of the main focuses has been exploring the effects of cattle and sheep grazing on Renosterveld, when compared with vegetation sampling plots that were not grazed by livestock for the duration of the study.

Some of the vegetation sampling plots were used for monitoring the effects of exclusion of grazing from the Renosterveld over five years. These plots were fenced off and then compared with an adjacent plot that was grazed by either cattle or sheep. 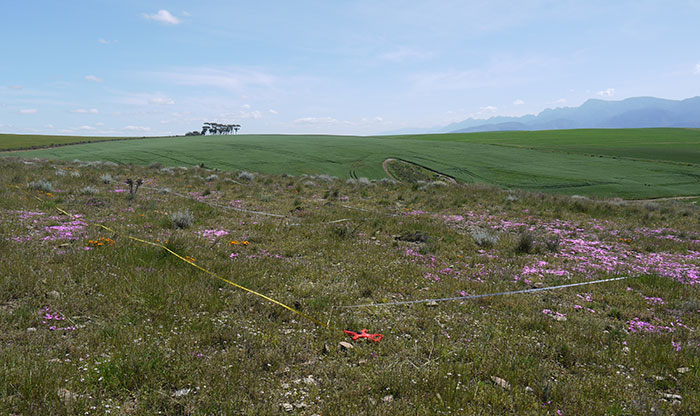 Each year during the peak flowering season of spring, the plots were visited to gather data on which plant species were present, including their growth forms, such as shrubs, bulbs, grasses and more. This helped us to build a picture of how the Renosterveld changed over time in response to both livestock grazing and resting the veld. 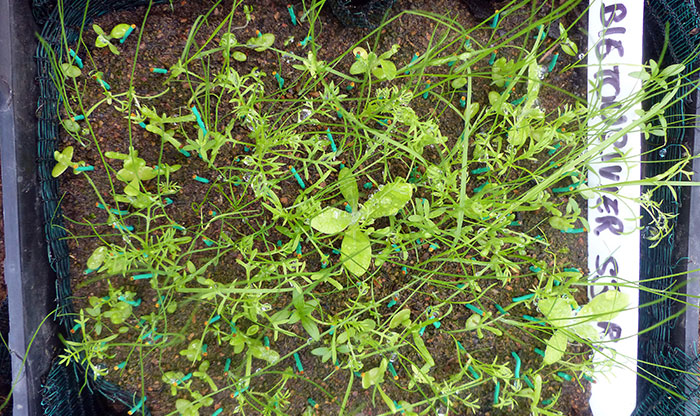 Above: Renosterveld seedlings germinating as part of the glasshouse experiment from Renosterveld soils to examine the composition of the soil seed bank across different grazing treatments.

This allowed us to examine whether after extensive livestock grazing had taken place, that the range of plants that characterise the biodiverse Renosterveld could grow again from seeds that were surviving in the soil under the right conditions, without the need to add additional seeds or plants as part of ecological restoration. 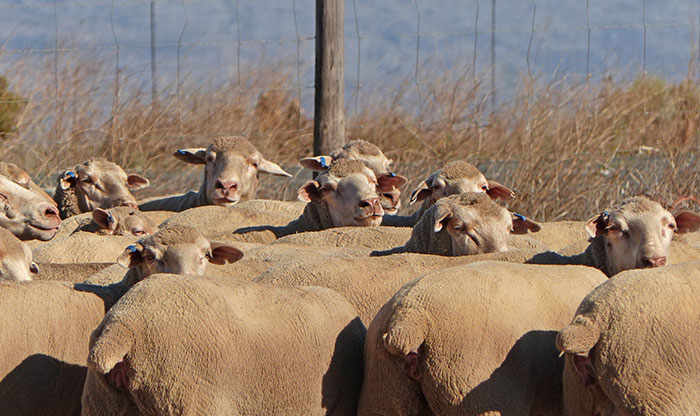 Above: Grazing by sheep needs to be carefully managed in light of the impact that this can have on Renosterveld vegetation.

The results from the study highlighted that grazing by sheep had a greater impact on the Renosterveld than other livestock, representing a threat to this highly biodiverse and critically endangered vegetation. Both the number and diversity of plant species in the Renosterveld and the vegetation covering the soil were found to decrease in response to sheep grazing.

However, Overberg Renosterveld soils were found to contain a wide range of indigenous plant species that represented the key types of plants that characterise Renosterveld, including shrubs, bulbs, grasses, and others.

The range of indigenous plant seeds that germinated from the Renosterveld soil did not vary significantly according to whether the site was grazed by cattle, sheep or was not grazed during the study. These findings demonstrate that overgrazed Overberg Renosterveld has a high potential for ecological restoration by resting the veld from livestock. 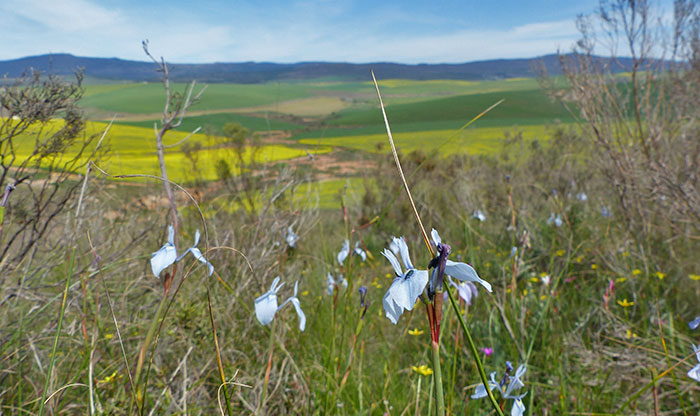 Above: Renosterveld vegetation in bloom during spring on a south facing slope in Western Ruens Shale Renosterveld. 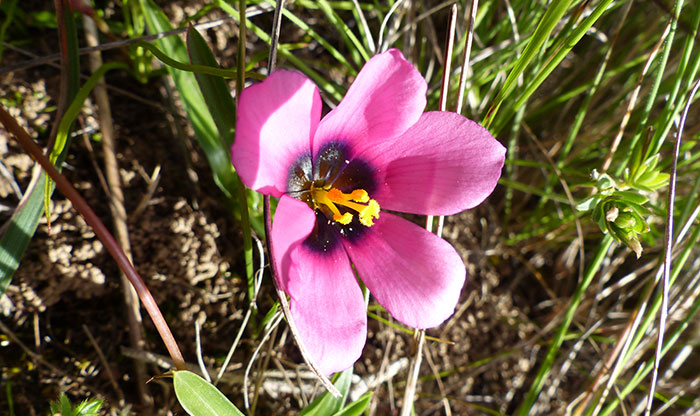 Above: The Endangered Moraea melanops in bloom in one of the survey plots from the study.

With the majority of Renosterveld having been lost by ploughing for agriculture, it is important that we effectively manage that which remains to achieve conservation goals. Findings from this research have highlighted the need to improve our knowledge around the ecological context of livestock grazing in Overberg Renosterveld, particularly for sheep grazing.

Caution needs to be exercised when using Renosterveld vegetation for livestock grazing. But if the damage has already been done, recovery from the seeds in the soil is possible with the correct management afterwards. Fencing of Renosterveld patches is a particularly effective tool for implementing appropriate grazing management. This can help support the conservation of these highly biodiverse and imperilled lowland ecosystems.