You are here: Home / Renosterveld Articles / Rodents of the Renosterveld: A Research Update

One of the key aims at the heart of the Overberg Renosterveld Conservation Trust has always been the pursuit of greater knowledge about this Critically Endangered, little known and highly misunderstood vegetation type. To this end a growing number of postgraduate students from multiple institutions have built highly successful research collaborations with the ORCT. The research and visitor’s centre at Haarwegskloof Renosterveld Reserve was humming with activity with visiting students during Spring.

Today we bring you an update on the work of one of those students. Abigail Graham is undertaking her Masters Degree in the Department of Environmental and Geographical Sciences at the University of Cape Town, supervised by Dr. Pippin Anderson and Professor Jeremy Midgley. Abigail is undertaking her Masters research investigating the impact of habitat fragmentation upon diversity of small mammals within Eastern Rûens Shale Renosterveld patches of different sizes. This is important research given that although there is a detailed and growing body of literature on rodent diversity and ecology within Fynbos there have still only been a few studies undertaken on rodents and their ecology within Renosterveld vegetation. We also know little of the impact of fragmentation of Renosterveld in the Overberg through transformation for agriculture upon small mammal populations. 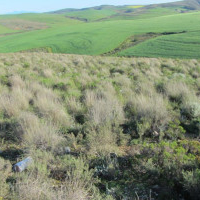 To undertake research on small mammals, first you have to catch them. And this requires time, patience and a little bribery and corruption. Rodents are caught using Sherman traps, which are baited with a mixture of peanut butter and rolled oats. Slices of apple are also placed in the traps to ensure that any rodents caught do not get dehydrated. The traps are wrapped in aerothene sheets to insulate them from the cold and cotton wool is placed in each trap for use as nesting material. Trapping is done overnight and then traps are checked early the following morning and after data collection any caught rodents are released back into the veld. Rodents were trapped within small, medium and large patches of Renosterveld to investigate the effect of patch size upon small mammal diversity.

Six different rodent species were trapped during the course of the study. The most commonly caught rodent was the Four Striped Grass Mouse (Rhabdomys pumilio). Rhabdomys have a wide distribution across all of Southern Africa and are highly adaptable to a variety of different habitat types. Next up was the Namaqua Rock Mouse (Aethomys namaquensis), also occurring throughout the subcontinent with tolerance of a broad range of habitats. Four Bush Vlei Rats were also caught as well as eight Southern Multimammate Mice (Mastomys coucha), three Elephant Shrews and three lesser Dwarf Shrews. Preliminary findings show that the majority of rodents were caught in the medium and large patches, suggesting that the smaller patches are less favourable as small mammal habitats. Further data analyses are still to be undertaken but it is hoped that this will reveal further interesting findings to be reported later.

Habitat fragmentation is one of the greatest ecological challenges facing Renosterveld in the Overberg. It is not known fully to what extent this has impacted upon biodiversity in these Critically Endangered habitat remnants. Preliminary findings from this research also highlights the importance of corridors such as watercourses in the landscape to allow wildlife from insects to rodents to larger mammals to move through the landscape so that patches of veld are not ‘islands’ marooned in a sea of crop monoculture. It is hoped that this work, once complete, will shed a little more light on how well small mammal populations are surviving in the Eastern Rûens. Watch this space for future updates.