The Renosterveld of South Africa’s Overberg region is one of the most species diverse Mediterranean type shrublands. It is also one of the most threatened and under-researched. One of the factors that has caused the evolution of such high levels of diversity and species turnover is the presence of high levels of habitat heterogeneity and many different types of microhabitats within the ecosystem. The levels of diversity and endemism associated with this is something that we are only just starting to fully understand about Overberg Renosterveld.

So what does this all mean?

When there is habitat heterogeneity in an ecosystem it means that across a relatively small area there is considerable variation in the specific ecological conditions that lead a certain plant or animal calling a place home. Soil chemistry or structure, availability of water, different levels of light or shade from the sun and other factors influencing growing or living conditions may vary to an unusually great extent in this environment. If a certain organism requires a specific set of these conditions to thrive, this is known as a habitat niche. Some organisms may live happily in a wide variety of different habitat conditions, others are adapted to one set of specific needs that can be only found in a select few places.

Where habitat conditions in a small area differ from the surrounding ecosystem, acting as home to a unique assemblage of flora and fauna, it is known as a microhabitat.

This is a common phenomenon in Overberg Renosterveld and can manifest in various different ways. The unusually common occurrence of microhabitats has meant that this extraordinary and biodiverse ecosystem is home to an unusually high number of endemic species. The word ‘endemic’ means that the organism being described only lives in one place, and is found nowhere else in the world. 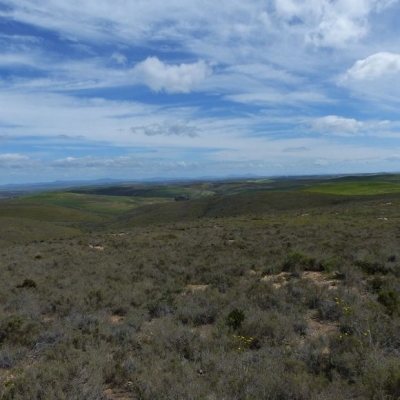 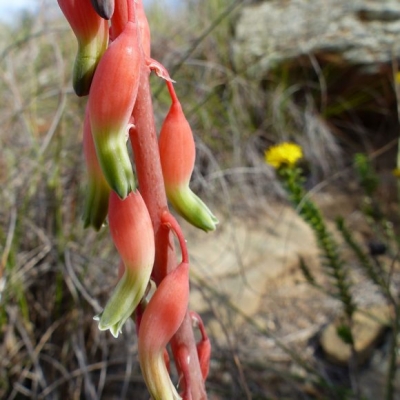 One of the most noteworthy examples of unique microhabitats within Overberg Renosterveld are the patches of white quartz found within the Eastern Rûens.

These have similarities to the quartz fields found in the Knersvlakte in Namaqualand and in the Klein Karoo, but are home to a unique assemblage of endemic species, many of which are now highly threatened in the wild after their homes have been ploughed up for agriculture and lost forever. The Eastern Rûens quartz patches had previously been dismissed as having relatively low levels of biodiversity, but more recent research has revealed no less than six new species endemic to this unique habitat.

It has often been said that, despite the fact that Renosterveld vegetation forms part of the Fynbos Biome, it actually has a greater ecological affinity with Karroid vegetation types due to its large succulent component.

Many of these succulent species have found weird and wonderful places to live within this vegetation type. Succulents are typically associated with hot and dry conditions, but in fact many actually prefer to grow away from the worst of the sun’s heat. Some species might grow inside the large tussock grasses so typical of Overberg Renosterveld. Others are commonly found growing underneath larger bushes. Large outcrops of shale where the softer strata have been weathered away provide deep crevices where both succulents and many bulb species may grow. 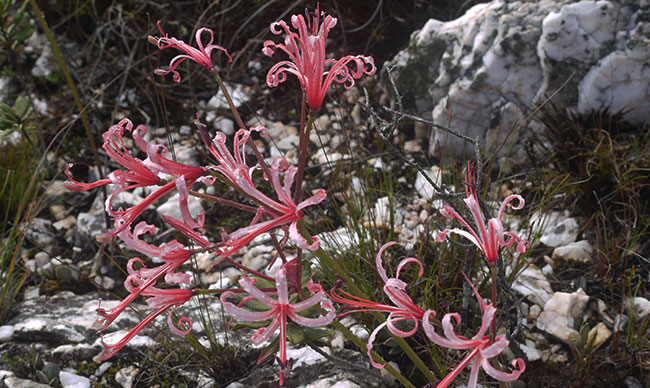 In the Eastern Rûens there are also outcrops formed from quartz geology.

These quartz koppies often have a unique array of different species. The ORCT discovered that one of these was the only remaining home for a unique form of the autumn flowering Nerine humilis. This particular form has unusually long styles and filaments, thought to be an adaptation to a specialist pollinator, likely a long-tongued fly. However, sadly despite extensive pollinator observations, the pollinator was not seen and the blooms of these form are no longer being pollinated here. It is thought that the long tongued fly that pollinates this form is sadly now extinct in the area.

These stories highlight the uniqueness of Overberg Renosterveld, as well as its fragility as it is becoming increasingly fragmented within an intensively farmed agricultural landscape.

In the past many of the rocky areas that form the unique microhabitats within this vegetation type have remained safe due to the difficulty in being ploughed out. But now with increasingly large farm machinery these small pockets of vegetation are being illegally bulldozed out. The sheer complexity of this habitat makes it highly challenging, if not impossible to restore once it has been destroyed. So spare a thought for this unique and extraordinary habitat and lend your support to those at the Overberg Renosterveld Conservation Trust who are working tirelessly to conserve it in perpetuity.