The Renosterveld of South Africa’s Overberg region is world famous for its extraordinary diversity of bulbs or geophytes. One of the most well-known genera are the Gladiolus. Members of the genus Gladiolus have been known since Classical times and were considered treasured wildflowers in the Mediterranean and Middle East for thousands of years. The genus name Gladiolus in Latin means ‘little sword’, in reference to the shape of the leaves, a common trait in members of the Iridaceae or Iris family.

There are around 260 species of Gladiolus, coming from Europe, the Middle East, through tropical Africa to Namaqualand and southwards to the Cape. Overberg Renosterveld is home to a stunning and highly varied range of species from this well-known genus, and here we will take a look at a small selection. Some are common and widespread, others are known from just a handful of sites. All of the species discussed here have a fascinating range of floral adaptations to attract a range of specialist pollinators. 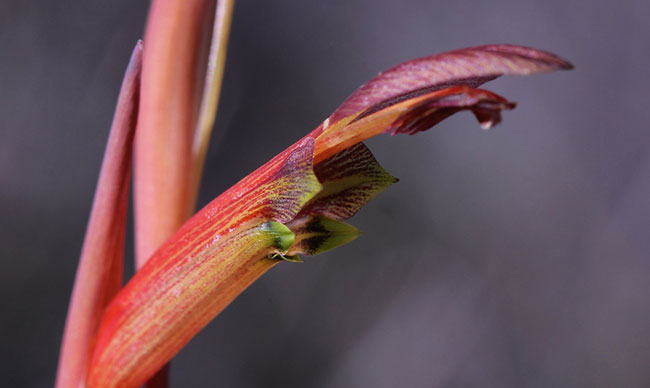 This quirky looking customer looks very unlike other members of the genus and caused considerable confusion among plant taxonomists prior to its classification as part of the genus Gladiolus. Gladiolus abbreviatus grows on clay and shale banks in Overberg Renosterveld from immediately west of Caledon eastwards to Riversdale. It is most commonly found on south facing slopes which are wetter and more sheltered, as well as watercourses or drainage areas. In Afrikaans this plant is also known as Slangkop or Suikerkannetjie.

Flowering time is predominantly from June to August but blooms are sometimes found as late as September. They are adapted for pollination by sunbirds, with recorded visits from Malachite Sunbirds which are thought to be the main pollinator. Gladiolus abbreviatus often grows in association with other red flowered species also pollinated by sunbirds such as Lessertia frutescens and Watsonia aletroides.

Subpopulations of Gladiolus abbreviatus are highly fragmented and this species has experienced considerable habitat loss as a result of lowland habitat transformation for agriculture. Several of these surviving subpopulations are in small fragments of renosterveld in road reserves and drainage areas. Invasive alien plants further contribute to habitat loss for this species. It is therefore listed as Vulnerable on the Red List of South African Plants. 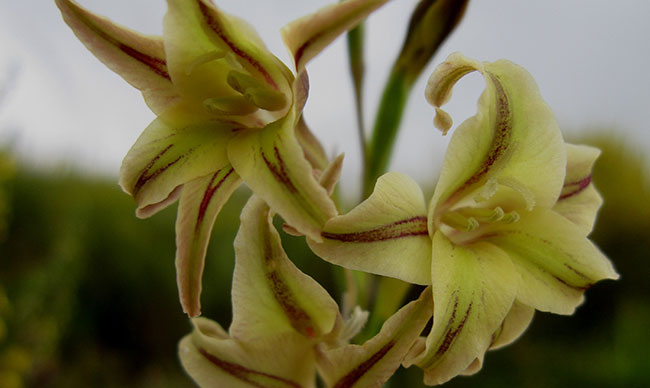 This sweet-scented beauty is endemic to the Overberg and is currently known from no more than five localities. It was first brought to the attention of botanists and described after being spotted by Rudolph Marloth at the Caledon Wildflower Show in 1916. To this day the collector or locality of the type specimen is not known. It wasn’t until 1932 that this species was recorded in the wild.

Today Gladiolus acuminatus is known to be distributed from Caledon to Bredasdorp where it grows on flats and north facing slopes in Renosterveld. It is a relatively poorly recorded species and known from just a few collections in the wild. Flowering time is from mid-August to late September. The sweet scent of the pale coloured blooms combined with the presence of long floral tubes suggests that Gladiolus acuminatus is moth pollinated, however, little is currently known about its pollination biology. More research is needed about this species. It is listed as Endangered on the Red List of South African Plants. 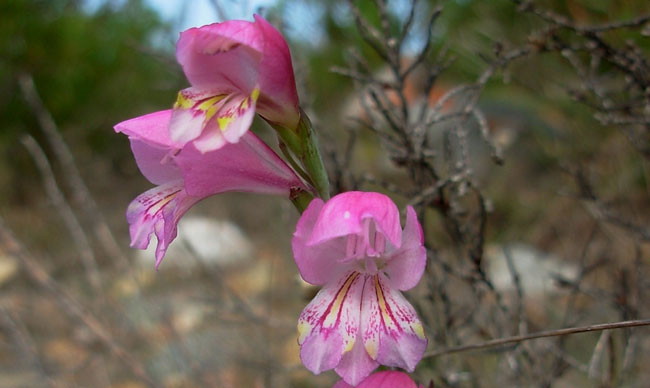 Gladiolus brevifolius is one of the most common autumn flowering Gladiolus from South Africa’s winter rainfall zone. It is also known as Autumn Pipes or March Pipes. This species is distributed from Piketberg southwards to the Cape Peninsula and eastwards to Montagu where it grows in association with a variety of different vegetation and soil types. It is relatively variable throughout its range. Flowering takes place predominantly during March and April but occasionally will occur as early as February. 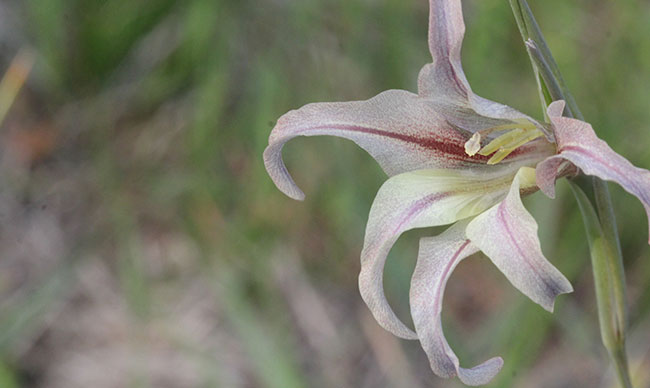 This spectacular Gladiolus is one of the largest to be found in the Renosterveld of the Overberg. It is also known as the Large Brown Afrikaaner, Aandpypie, Grootbruinafrikaaner, Kaneelaandblom or Ribbokblom in Afrikaans. Distributed from the Cederberg through to Port Elizabeth in the Eastern Cape, Gladiolus lilliaceus grows on clay soils in renosterveld vegetation.

Flowering takes place from August through to November. The tepals of the flowers are a rusty orange colour during the day but at sunset they change colour to a translucent mauve, releasing a strong scent of cloves. It is thought that this is to attract moth pollinators that become active at dusk. 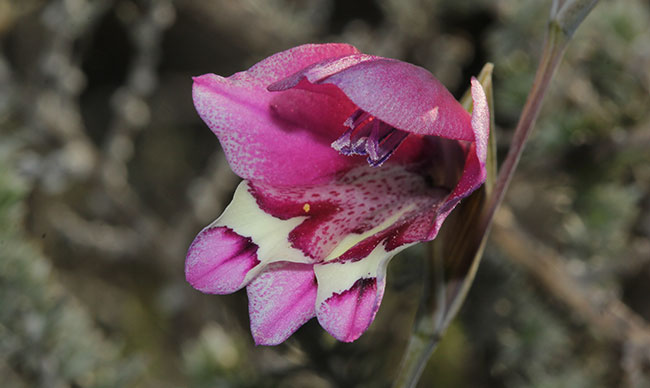 Easily recognisable with its beautiful and delicate purple and white blooms, Gladiolus patersoniae was named after Eastern Cape naturalist Florence Paterson, who made the type collection of this species in the Baviaanskloof mountains in 1910.

This species has a relatively large distribution, being found from Worcester through to the Southern Cape mountains and eastwards to the Baviaanskloof mountains. Few other Gladiolus grow at such a high altitudinal range and across such high climatic variability. Flowering takes place from August to September at lower elevations and as late as October and November for higher altitude subpopulations. The flowers are pollinated by long tongued bees. 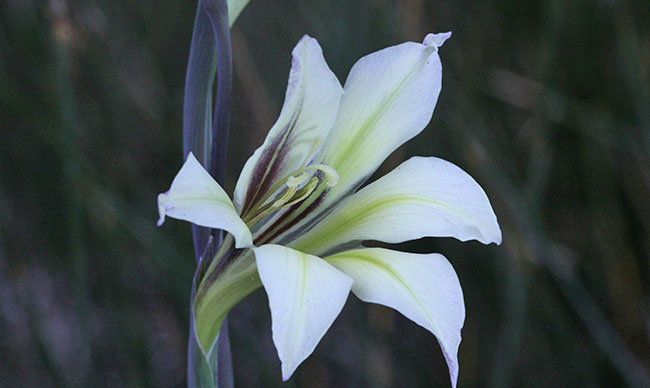 Perhaps one of the most well-known Gladiolus of Overberg Renosterveld, Gladiolus tristis is also known as the marsh Afrikaaner, Vlei-aandblom, Rheebokblom or Trompetters. Its species epithet ‘tristis’ means ‘sad’ in Latin, alluding to the relatively pale flower colours. Some even describe them as dull, but we don’t think so. The soft white/yellow blooms of this species are produced from August to November and occasionally December to January at higher altitudes. They were once popular as cut flowers but should not be picked, rather being left to be enjoyed in the veld, setting seed after flowering for the next generation of Gladiolus. The flowers only open completely in the late afternoon and evening and are sweetly scented. It is thought they are pollinated by Sphinx moths (Sphingidae).

Gladiolus tristis is a relatively widespread species, distributed from Nieuwoudtville on the Bokkeveld Escarpment southwards and east to Port Elizabeth in the Eastern Cape. It is particularly common in the Overberg from Bredasdorp eastwards to Riversdale where it can often be seen growing in dense colonies on damp flats. This species grows on both granite, shale and sandstone derived soils. 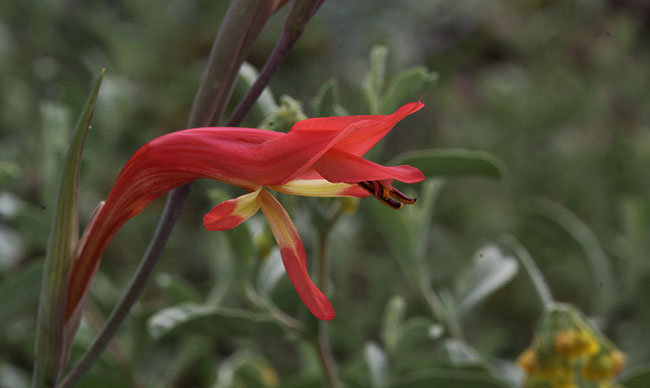 The intense red blooms of this beautiful bulb look much like a tropical bird, with splashes of red visible in the renosterveld during spring where the highly threatened Gladiolus vandermerwei still survives. In fact, the flowers are pollinated by sunbirds.

It was named in honour of J.S. Van De Merwe who first collected this species in 1928. He gave plants that he collected to P. Ross Frames for cultivation and pressed specimens were lodged in the Bolus Herbarium (at the University of Cape Town). Gladiolus vandermerwei was described as a new species by Louisa Bolus in 1933 where it was initially placed in the genus Antholyza. It was later revised to genus Gladiolus in 1989 by Goldblatt and De Vos.

This species is distributed from Botrivier in the western Overberg eastwards to Heidelberg in the east of the region. It grows in Overberg Renosterveld on shale derived soils in dry areas, as well as on quartzitic outcrops in the eastern Overberg.

Gladiolus vandermerwei has lost more than 80% of its habitat owing to transformation for agriculture and is now only known from around ten highly fragmented subpopulations with fewer than 250 plants each. It is therefore ‘Endangered’ on the Red List of South African Plants.