Those of us who know and love the Renosterveld of the Overberg know it for its sweeping grasses that blow in the wind against the soft greys of the renosterbos, its spectacular bulbs and the tiny delicate beautiful blooms of the shrubs from the pea (Fabaceae) and daisy (Asteraceae) families that dominate this biodiverse and imperilled vegetation.

The dominance of these plant families and functional groups are one of the main reasons that Renosterveld vegetation stands apart from fynbos, which is perhaps its most well-known sister vegetation. Fynbos vegetation is known for its incredible diversity within the Protea (Proteaceae), Erica (Ericaceae) and Restio (Restionaceae) families. 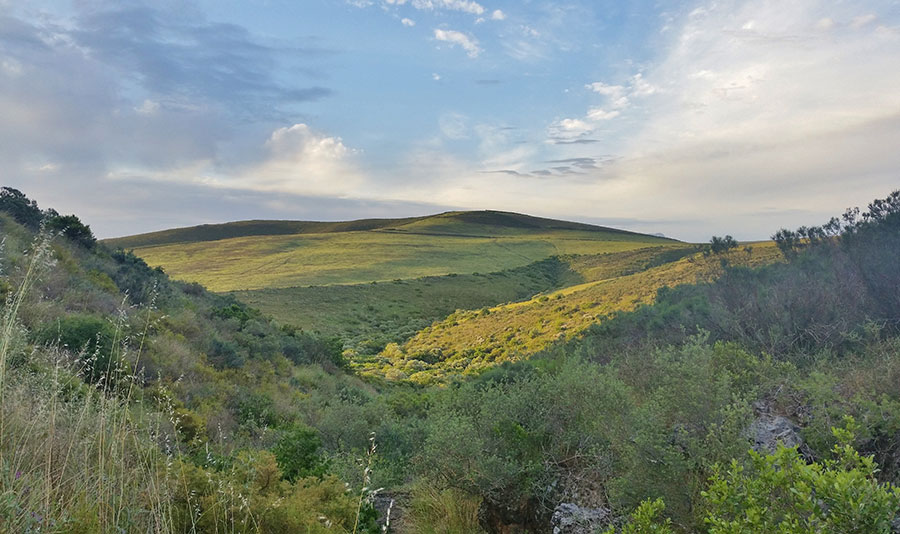 But few realise that Overberg Renosterveld is also home to several members of the Protea family and many of these taxa are highly threatened. Yet again, the Renosterveld continues to surprise us with its extraordinary ecological complexity. Let’s take a closer look at the secret life of these Renosterveld Proteas.

Also known as the ‘Aardroos’ or ‘Rough-Leaved Sugarbush’, this Protea is a prostrate shrublet that grows up to approximately 50 cm across. The English common name refers to the leaves, which are hairless and rough in texture.

The flowers of this species are golden brown to beige and are occasionally found in pink. This ground Protea is a lowland species that grows on sandy and shale-derived soils. It is distributed from the Kleinrivier and Bredasdorp mountains and flats with outliers in the eastern Langeberg.

This long-lived bird pollinated Protea resprouts after fire. Considerable population reduction has occurred due to habitat loss from agriculture, mining and alien plant invasion, leading to it being designated as Vulnerable on the Red List of South African Plants. 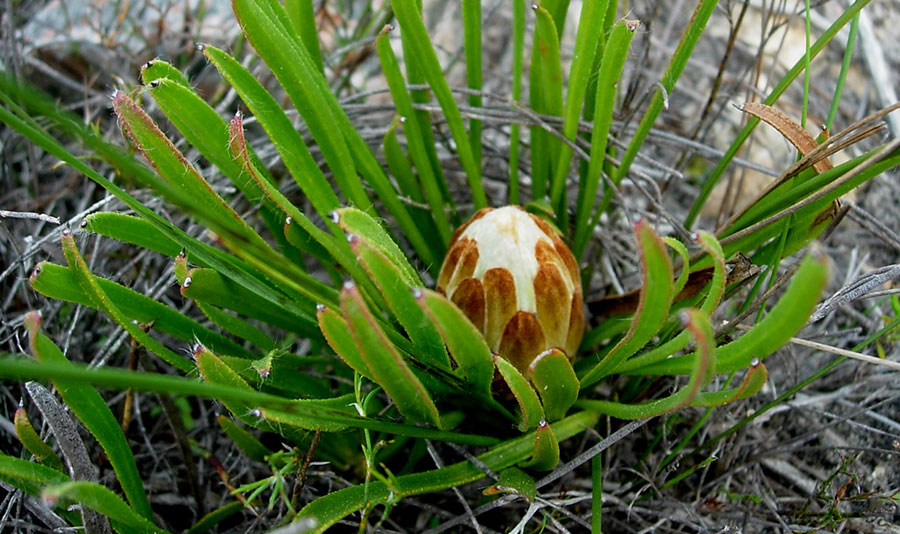 The Linear Leaf Sugarbush (Protea decurrens) is easily recognised by its yeasty-smelling pink flowers that are at ground level at the base of the plant. This an adaptation for rodent pollination, with this species coming into bloom during July and August.

Protea decurrens grows in relatively specialist habitat conditions on silcrete and ferricrete gravels at ecotones between fynbos and renosterveld vegetation. It is distributed from Shaw’s Pass to Potberg and the Langeberg.

Population decline of this species is ongoing due to threats from habitat loss due to agriculture, as well as alien plant invasion and too frequent fire. It is listed as Near Threatened on the Red List of South African Plants. 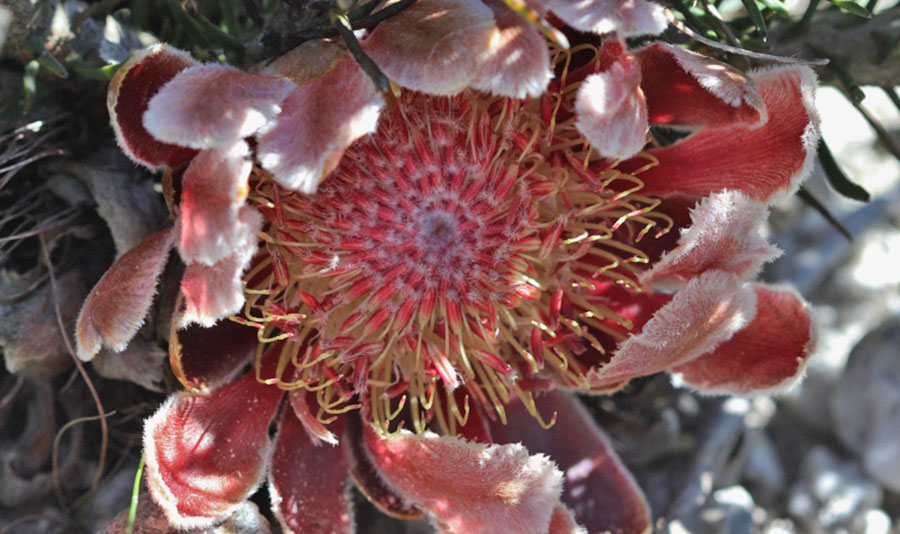 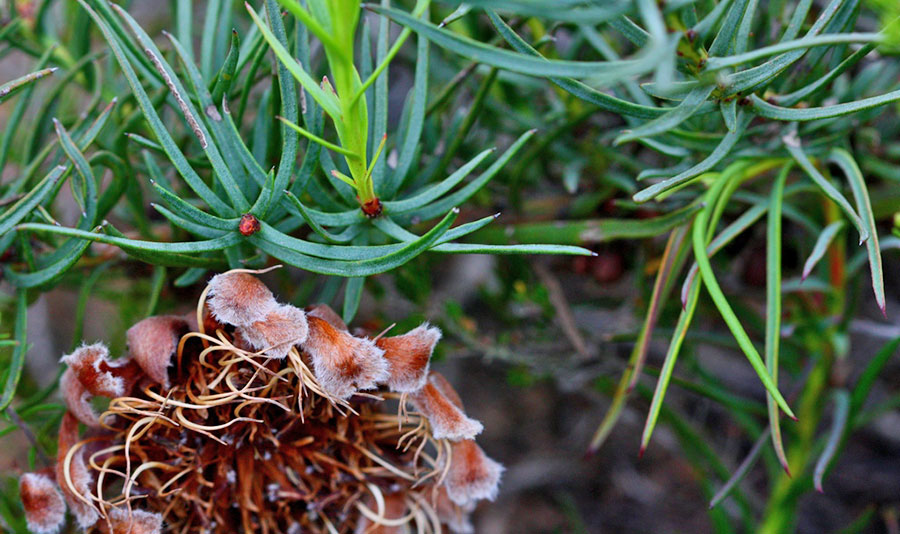 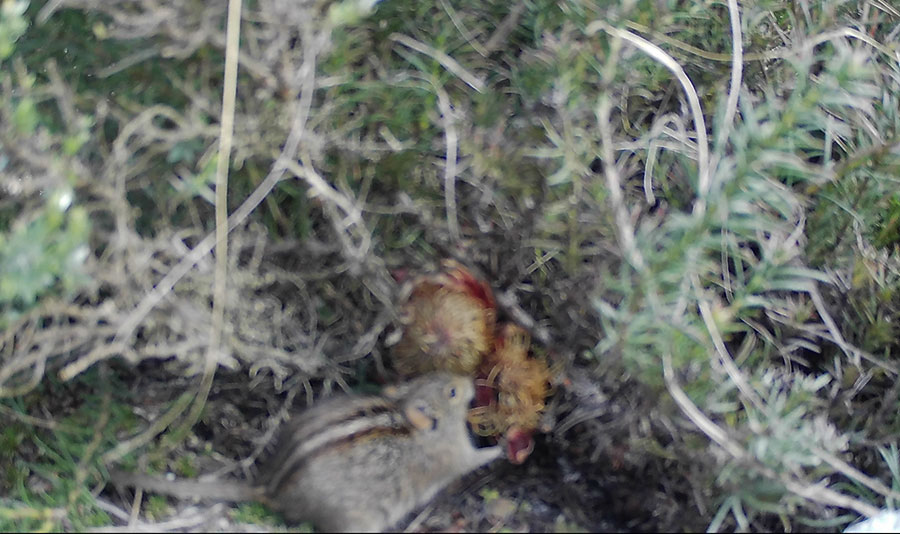 Few can miss the spectacular sight of the nectar feeding long-tailed sugarbird, which are the primary pollinators of the Limestone Sugarbush (Protea obtusifolia). The leathery leaves of this species are a rich dark green and the flowers are red or occasionally cream in colour.

Protea obtusifolia grows across the Overberg from Stanford eastwards to the Gouritz River on the Garden Route where it predominantly grows on limestone hills and flats. It has, however, been recorded at a few sites in Eastern Rûens Shale Renosterveld.

Across its habitat range, the Protea obtusifolia population is declining due to habitat loss from agriculture and alien plant invasion. Therefore, it is listed as Near Threatened on the Red List of South African Plants. 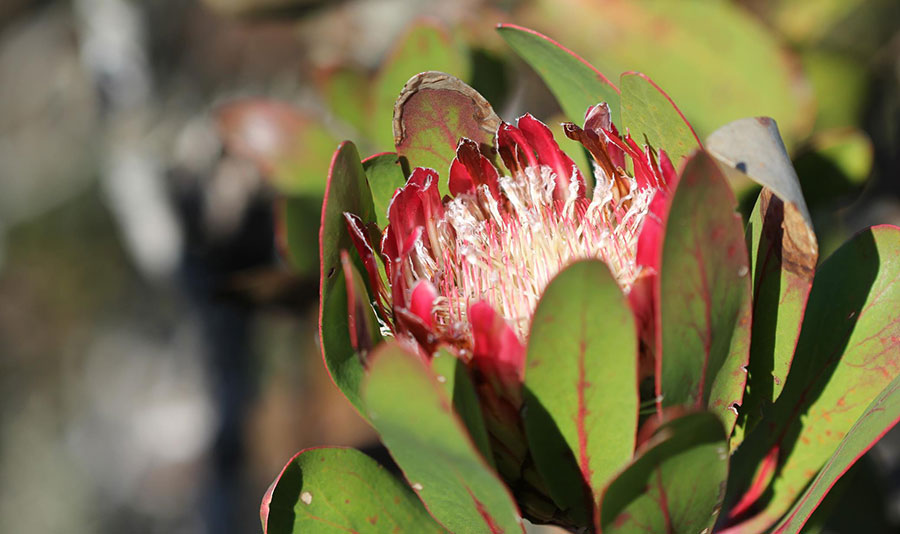 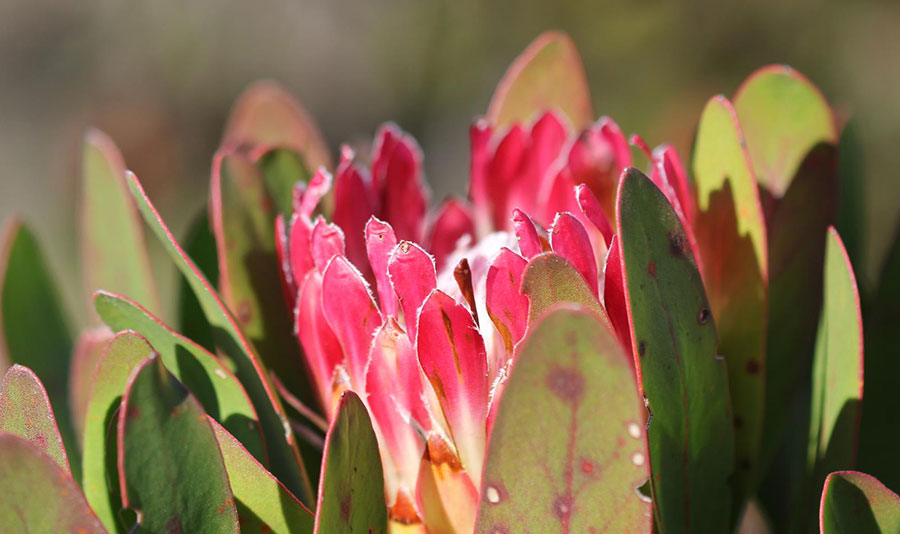 This delicate small beauty is known as the Rosette Conebush (Leucadendron coriaceum). Growing from a woody rootstock, this species grows up to 60 cm in height, with insect-pollinated male and female flowers on separate plants.

The Rosette Conebush grows in Renosterveld vegetation and at ecotones between Fynbos and Renosterveld, where it is found on gravelly soils around Napier to Potberg, the Riviersonderend Mountains and the Langeberg eastwards to Riversdale on the Garden Route.

The remaining populations of the Rosette Conebush have now become highly fragmented due to habitat loss from transformation for agriculture. This species is further threatened from herbicide drift and overgrazing. It has therefore been listed as Endangered on the Red List of South African Plants. 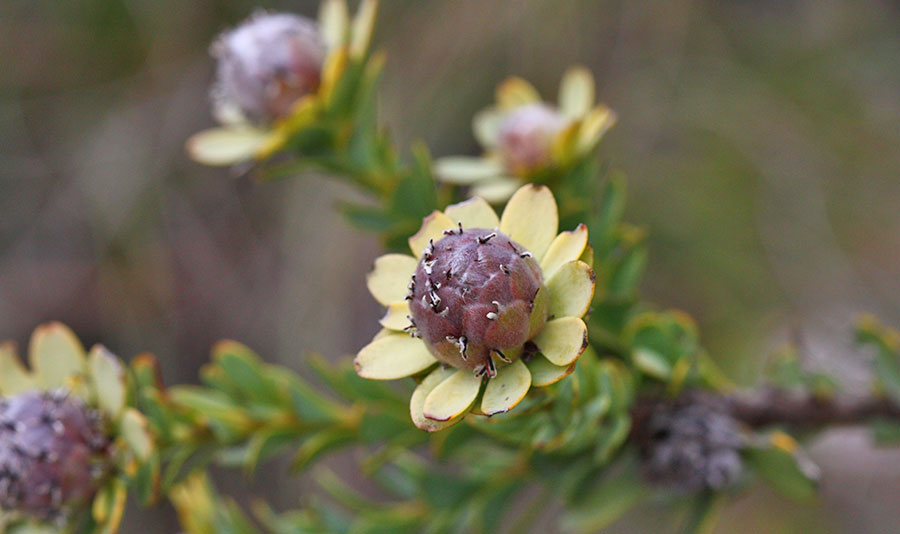 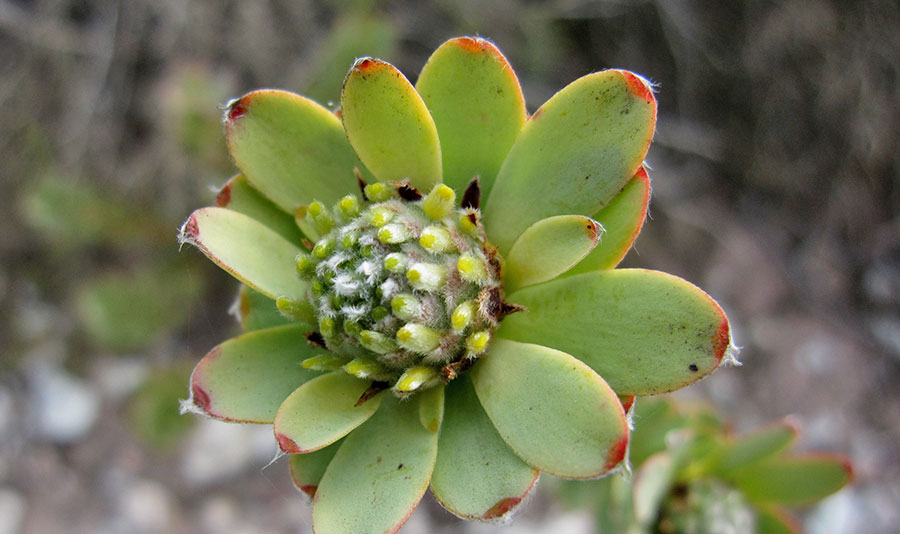 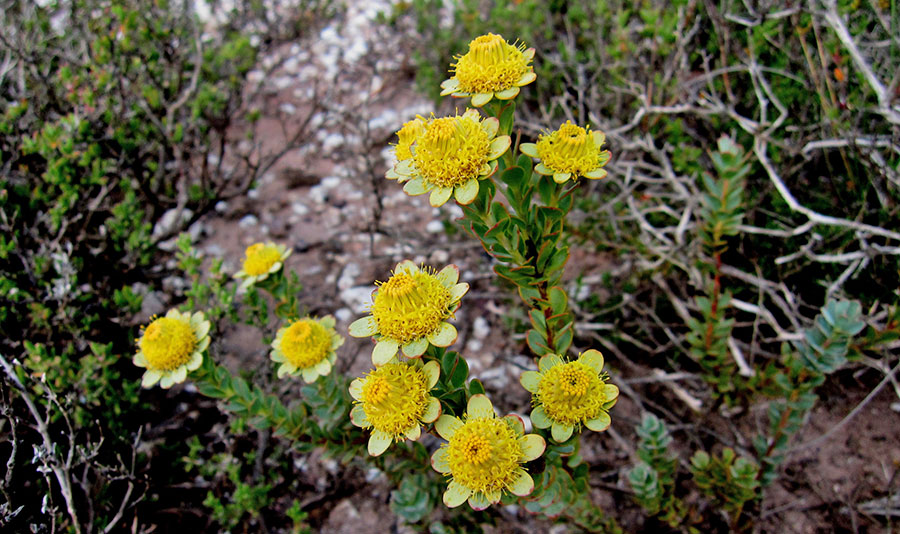 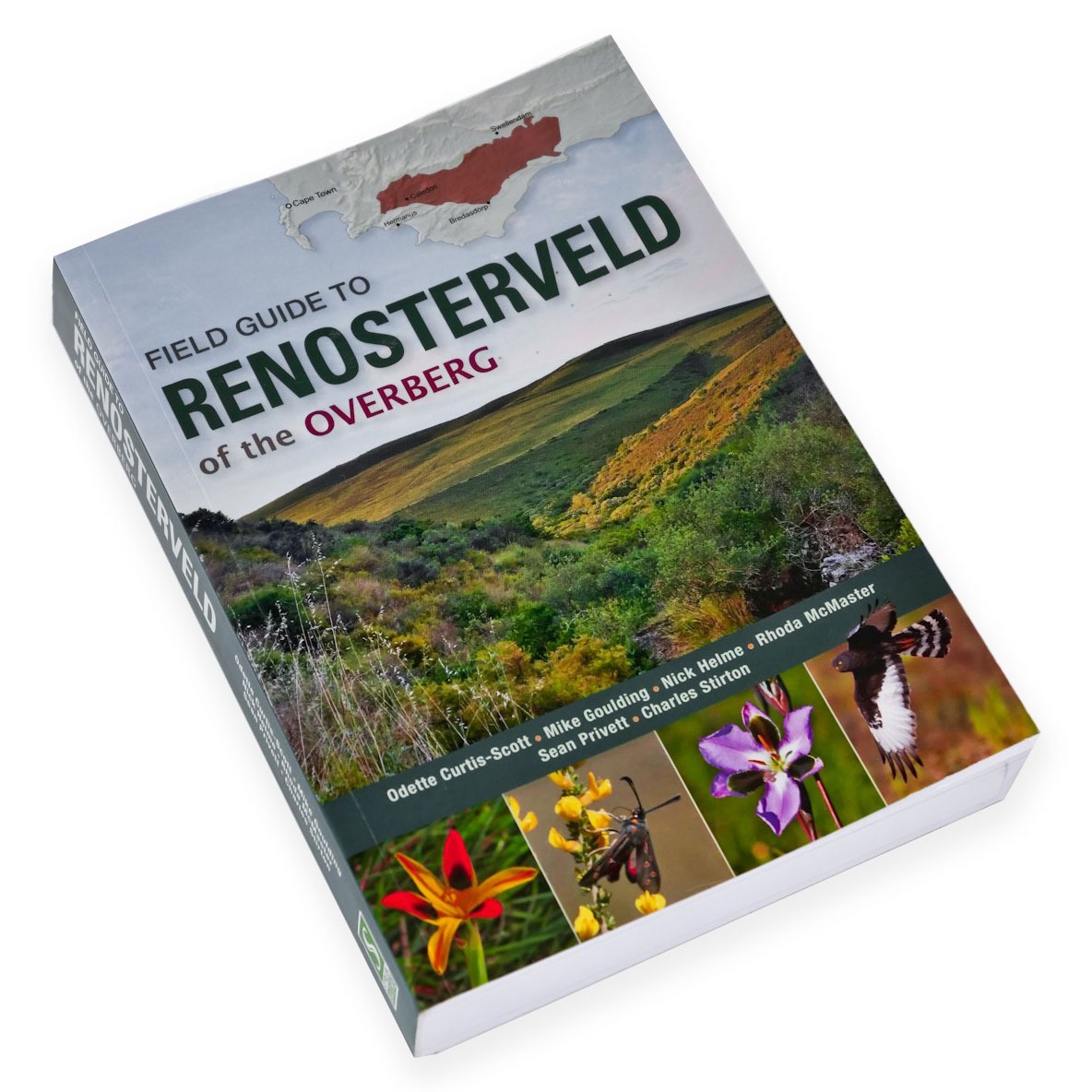 You can start learning about these beautiful Overberg Renosterveld Proteas and the extraordinary biological diversity of these imperilled ecosystems from the Field Guide to the Renosterveld of the Overberg.

This rich and detailed field guide draws on the knowledge of its expert authors, including the ORCT’s founder and director Dr. Odette Curtis-Scott. Copies are available for purchase from our online shop, with the proceeds helping us to continue our vital conservation work in Overberg Renosterveld.