Two years ago, I moved with my husband and soon-to-be-born baby to a 4-ha smallholding on the edge of Napier. The previous owners had farmed goats here and what remained of the veld areas on this property appeared to be quite ‘hammered’ by the goats and I had little hope that there would be much left. However, around the ‘driveway’ of the property, a small ½ hectare of Rûens Silcrete Renosterveld had been spared from the goats and I began exploring this. Studies in the past have shown that diversity in small patches can be as impressive as that in large patches and it turned out that ‘my patch’ was to bare testament to this! 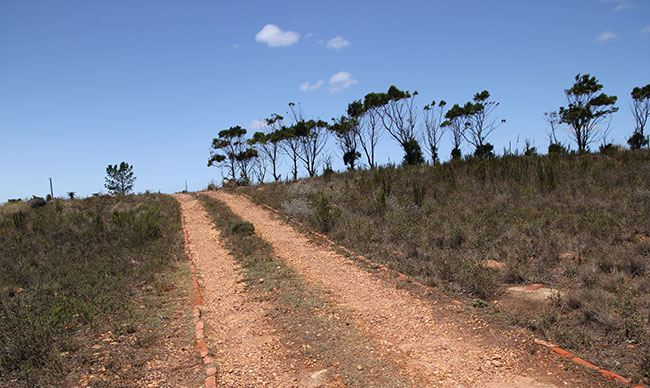 The first surprise was the discovery of FIVE species of geophytic Pelargonium, but all were in leaf and I had no idea what most of them were. I therefore photographed the leaves and placed markers at each plant, until I was able to ID them when they flowered at various times in the year (with help from my friend Matija Strlic): P. carneum, P. triste, P. dipetalum, P. pilansii and the Critically Endangered P. caledonicum. Being a fan of this particular group of plants, discovering these was like Christmas for me – what an incredible wealth of these beauties literally in my driveway! 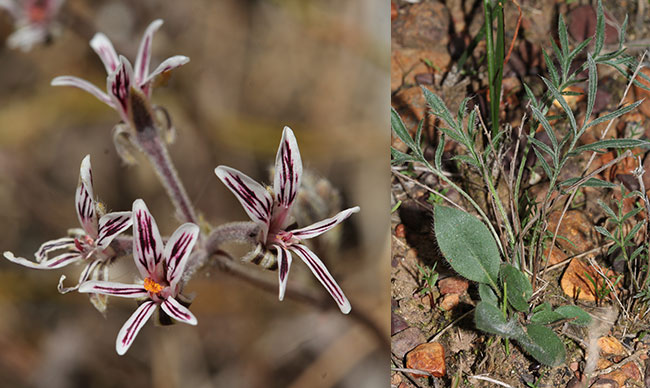 Above: P. caledonicum (flowers and leaves) 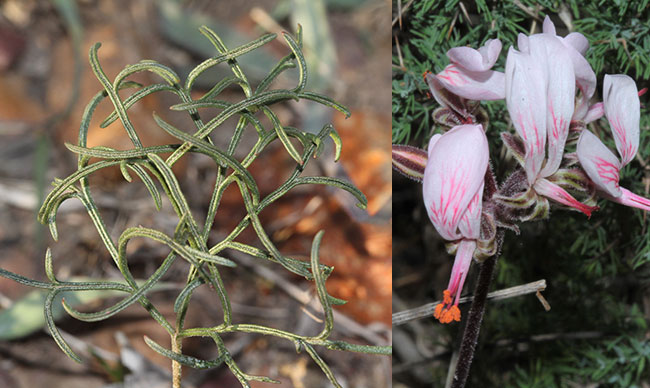 Above: P. dipetalum (leaves and flowers) 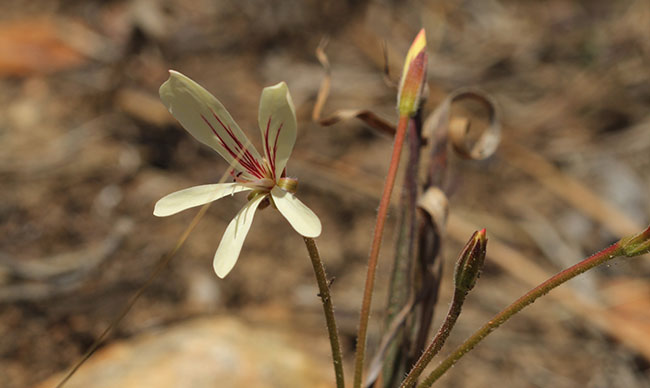 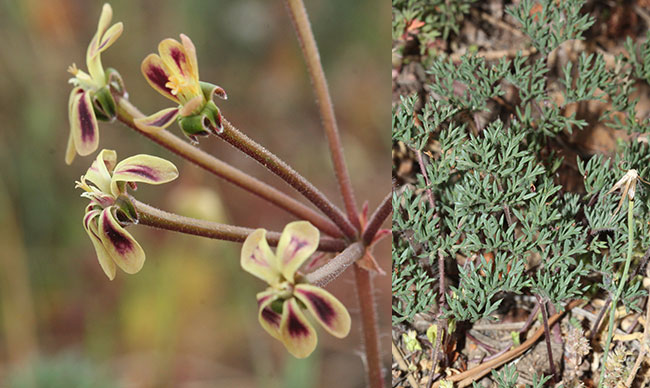 Above: P. triste (flowers and leaves) 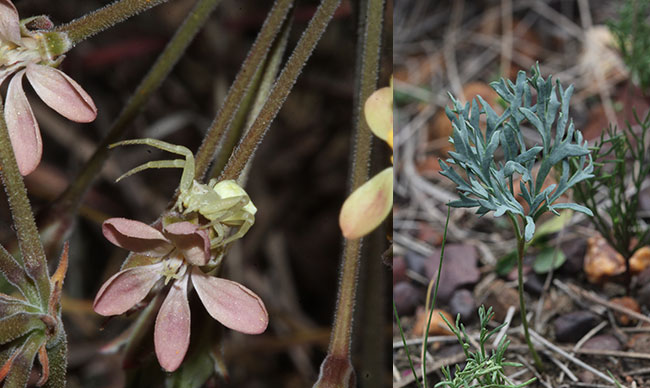 Above: Pelargonium pilansii, a night-flowering species which develops a sweet small resembling banana pancakes and is likely to be pollinated by moths. Every night, I observed a Crab Spider waiting patiently for the pollinator to arrive, in the hope that he would catch his dinner. I never observed a visiting moth, but the flowers produced seeds.

Several other surprises appeared as the year went by…a cluster of Nerine humilis, several other pretty autumn bulbs, while the Endangered, winter-flowering Babiana montana was a pleasant surprise. 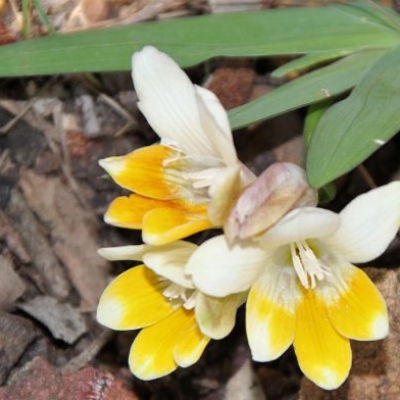 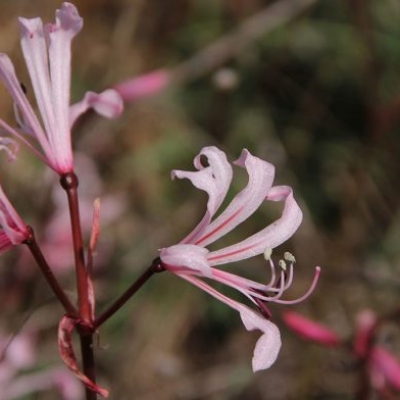 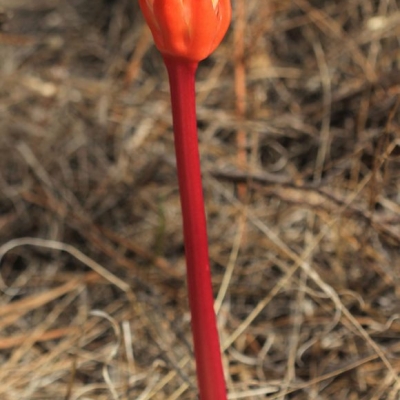 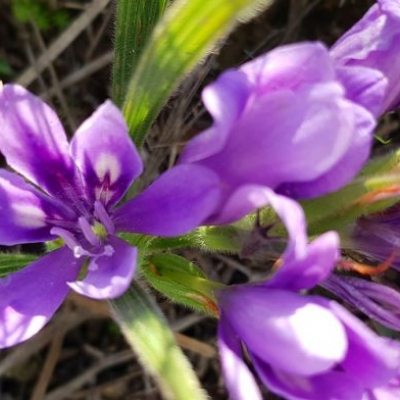 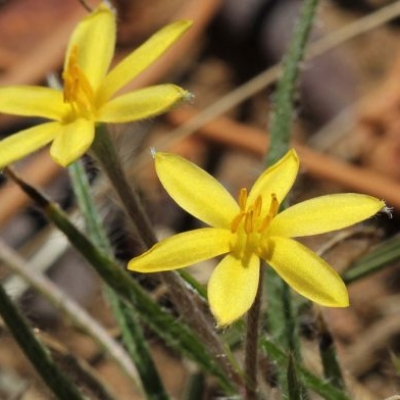 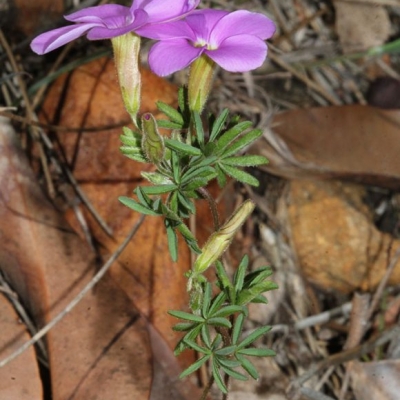 A big surprise was the discovery of Lampranthus debilis growing on this small patch – a delicate, creeping vygie pale green leaves and bright magenta flowers. This species is also listed as Endangered. Another threatened vygie known as Disphyma dunsdonii also grows on an isolated patch away from the rich ½ ha patch – this species is typically associated with brackish watercourses, indicating how different the ecosystem on this property was before it was altered by man (and goats!). 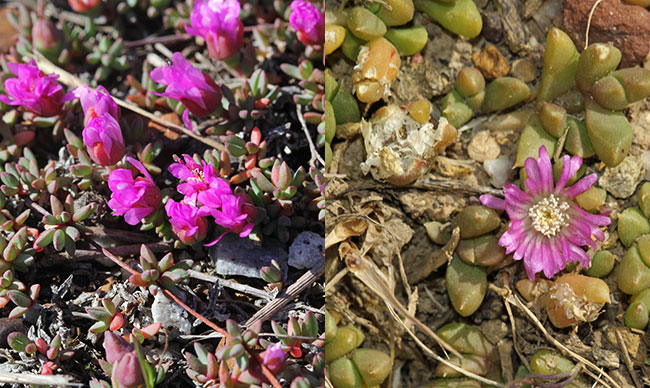 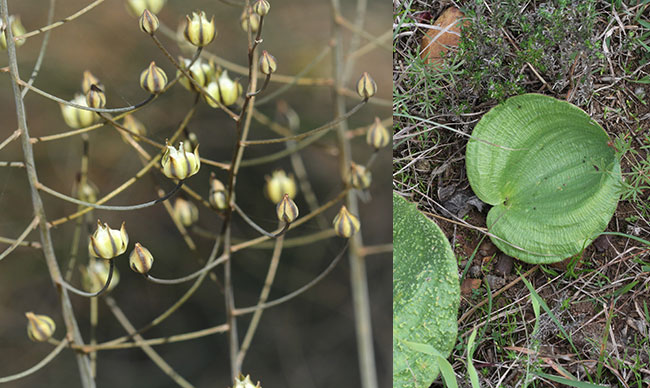 Above: Two Eriospermums on the property: E. capense (flower & leaf) 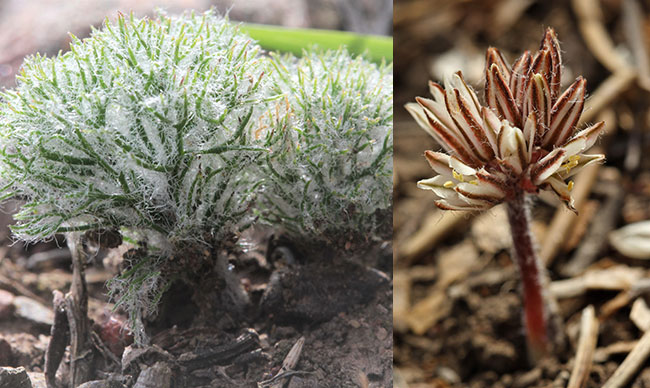 Above: E. paradoxum (leaves and flower)

I came across a strange little yellow-flowering Gnidia that I had not seen before and sent it to taxonomists at SANBI. They came back to me saying that the species is unlikely to be described and will probably only receive a name once taxonomy of the entire genus is revised and this could take many years! I learned that this is the case for many groups of plants – there simply aren’t enough taxonomists trying to decipher the diversity of our wonderful Fynbos Biome. 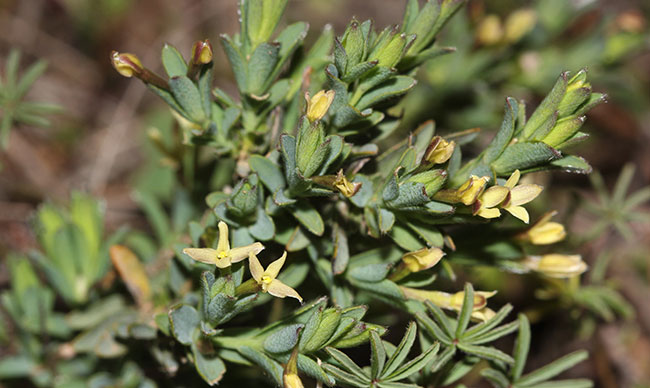 Above: an undescribed Gnidia species.

Spring was full of delights and we enjoyed several geophytes, shrubs and forbs. We recently felled the row of pines and two Eucalyptus trees which were shadowing the Renosterveld here, as well as dropping their leaf litter (which was no doubt changing the chemical composition of the soil). There is much to look forward to as we watch this vegetation rest and recover. What’s next…? More threatened and endemic species? A burn? An easement? Watch this space. 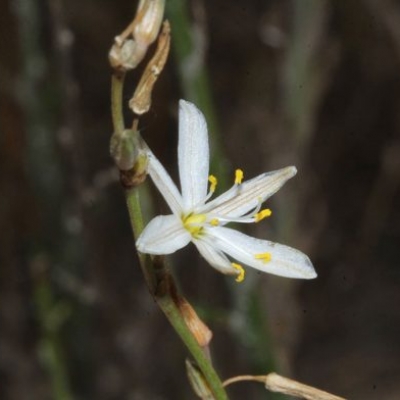 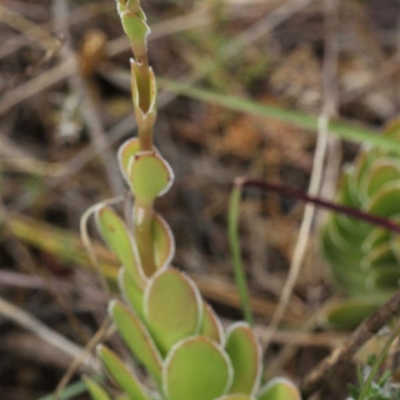 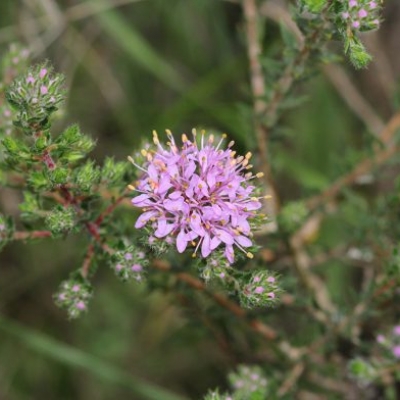 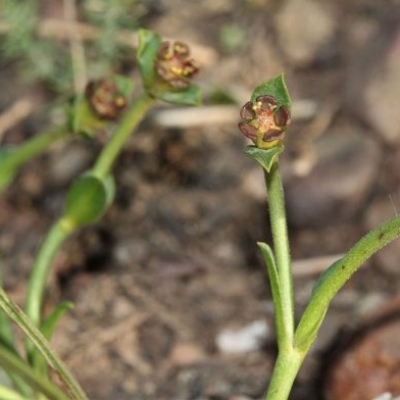 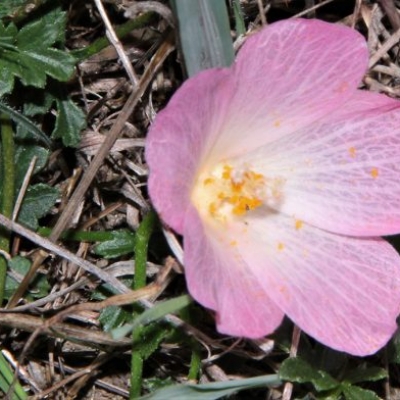 And REMEMBER…. This diversity (and much more) was recorded on a ½ ha piece of Renosterveld…. Just imagine what you are likely to find if you explore your own local patch, or your own farm. Renosterveld is full of surprises and there is so much that we still do not know or understand. And there are more species waiting to be discovered and described. So what are you waiting for…? Get out there! 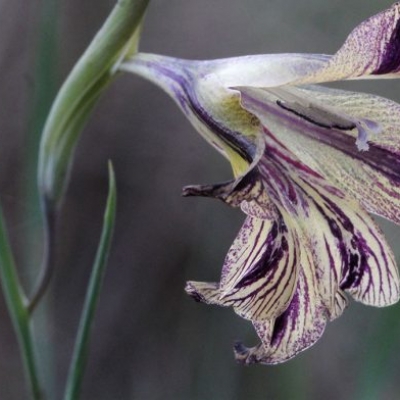 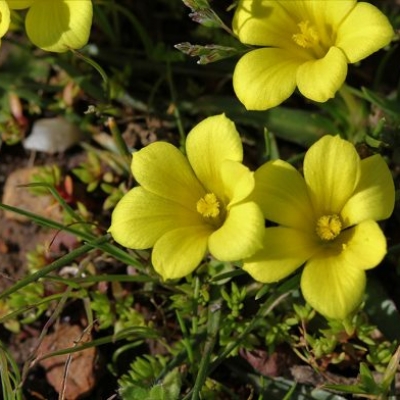 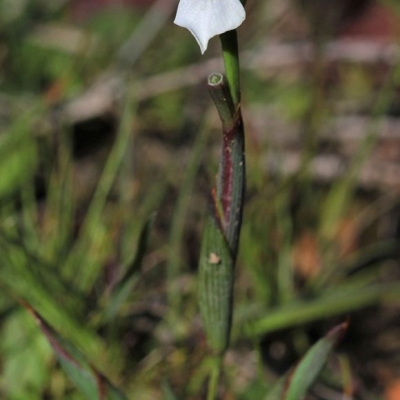 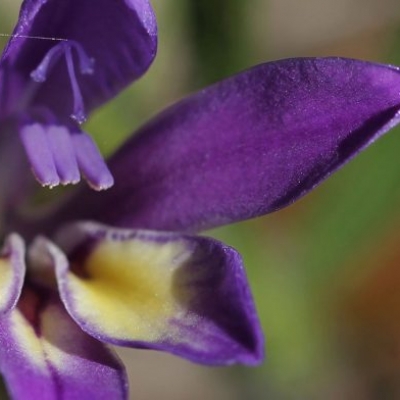 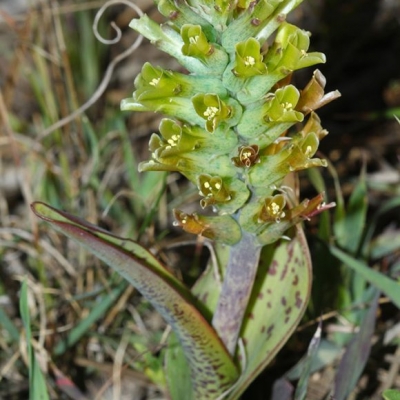 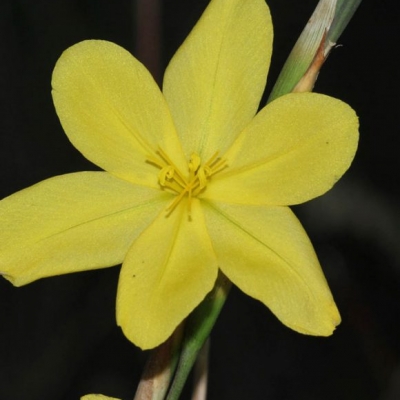