When August arrives in the Cape, one of the most specular displays of the natural world comes to the Fynbos Biome as its diverse vegetation comes into bloom. The Renosterveld of the Overberg is particularly known for its stunning diversity of geophytes, with a plethora of spectacular gems to be found. Officially ‘Spring Day’ only comes on the 1 September, but nobody has told the Renosterveld.

The Overberg Renosterveld Conservation Trust (ORCT) team and many others working in the Cape Floristic Region spring into action. This short flowering window is the most important time of the year to monitor and undertake biodiversity surveys used for conservation planning and red listing.

The main flowering season is fleeting and just a few short weeks after it begun, most of the blooms are over, the Renosterveld flora is busy getting down to the important business of setting seed and the botanists, excited and inspired, head back to their desks to process their findings from the spring whirlwind. Soon October is here and with it comes harvest time for Overberg farmers. But for the Overberg Renosterveld, spring is not quite over yet. As summer is around the corner and the weather starts to warm, there are still some beautiful ‘harvest blooms’ to be seen. 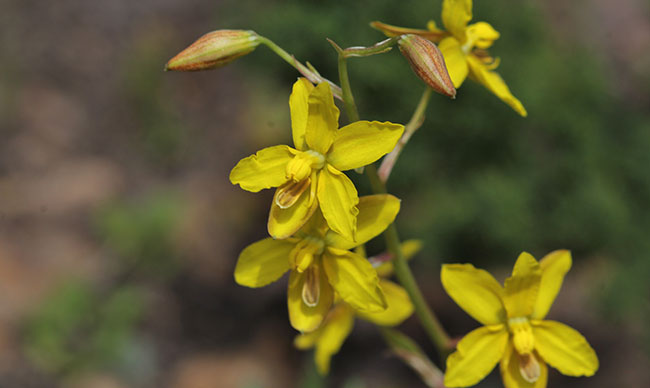 Cyanella lutea is a cormous geophyte with striking yellow blooms, commonly found in Overberg Renosterveld. It is a member of the Tecophilaeaceae family and is also known as the Lady’s Hand or geelraaptol in Afrikaans. The species epithet ‘lutea’ means ‘yellow’ in Latin, in reference to the colour of its blooms. The common name geelraaptol is thought to refer to the turnip-like shape of the corms. Cyanella lutea has a wide distribution range, found from southern Namibia to the southern Free State and eastwards to the Eastern Cape where it grows on clay and limestone flats. Flowering takes place from September to October. 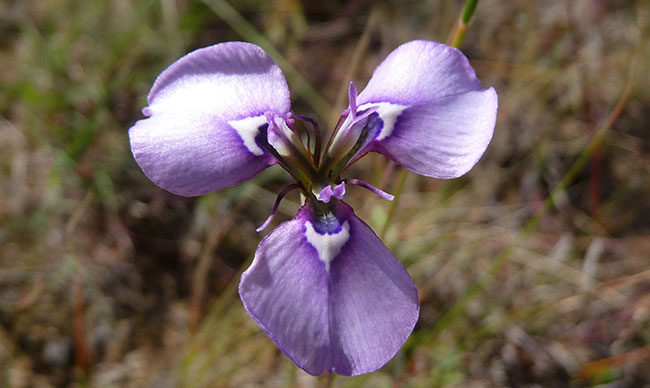 This delicate small purple Moraea is uncommon in the Overberg. Its species epithet ‘debilis’ means ‘slender’ in Latin, referring to the delicate habit of the plant. It comes into flower late during spring, flowering from September often well into October after most other Renosterveld spring flowers have finished their beautiful displays. This species was collected by several early botanists in the Cape, including Carl Pappe and Rudolph Schlechter, although it was often mistaken for the similar looking Moraea tripetala.  It has a highly fragmented range, from Botrivier to Swellendam in Western, Central and Eastern Rûens Shale Renosterveld on clay slopes. Moraea debilis is threatened by further habitat loss, livestock overgrazing and habitat degradation by edge effects such as herbicide spraying in small Renosterveld remnants. It is therefore considered Endangered on the Red List of South African Plants. 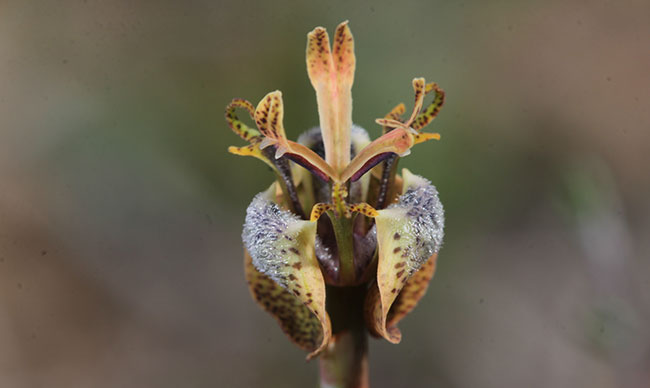 Moraea inconspicua is a cormous geophyte in the Iridaceae family. The derivation of the species epithet needs no explanation: Named in reference to its small flowers which are easily overlooked. It is one of the most widespread Moraea species found in the southern African winter rainfall area, distributed from Namaqualand southwards to the Cape Peninsula and eastwards to Port Elizabeth in the Eastern Cape. Moraea inconspicua grows in dry and relatively exposed habitats, from granite outcrops to deep sands and clay flats. Flowering takes place from September to December. 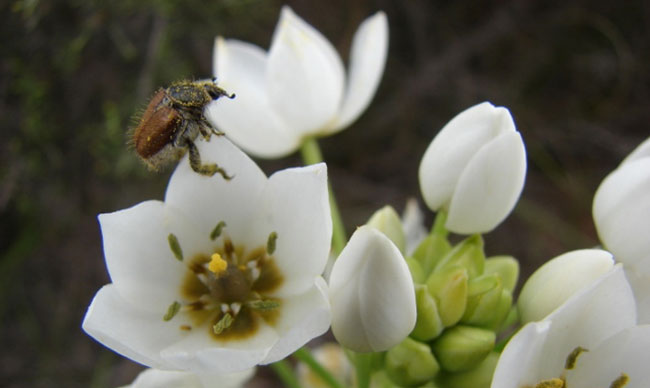 Perhaps one of the most ubiquitous late spring blooms of Overberg Renosterveld, the cheerful blooms of this bulb light up the veld at the end of the flowering season. They are a member of the Hyacinthaceae family and also known as chincherinchees, star of Bethlehem or tjienks in Afrikaans. They are widespread and common, being found from Namaqualand southwards to the Cape Peninsula and eastwards to Caledon and the Agulhas Plain in the Overberg. They grow on sandy and clay flats, disturbed areas and on lower mountain slopes. Ornithogalum thrysoides is of significant horticultural importance with its long-lasting flowers being used in the cut flower industry around the world. 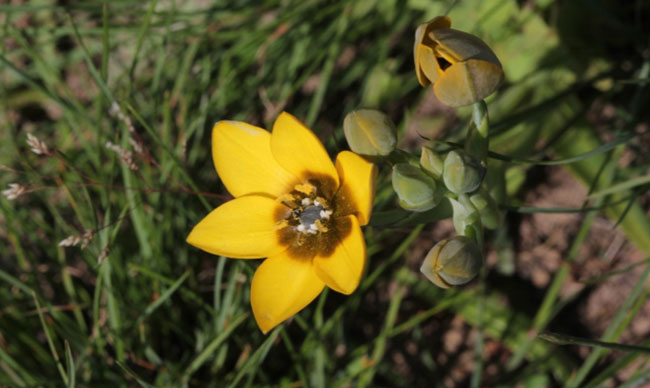 The bright orange or yellow blooms of this species are also hard to miss in the Renosterveld. Ornithogalum dubium is a member of the Hyacinthaceae family and is also known as the yellow chincherinchee, geeltjienk in Afrikaans or itsweletswele in Xhosa. Like Ornithogalum thyrsoides, it also makes a great cut flower. The flowers are dark in the centre, an adaptation for pollination by monkey beetles. Ornithogalum dubium is distributed from Clanwilliam in the Cederberg southwards to Paarl and eastwards to Port Elizabeth in the Eastern Cape. It grows on mountain slopes and flats on stony clay soil. 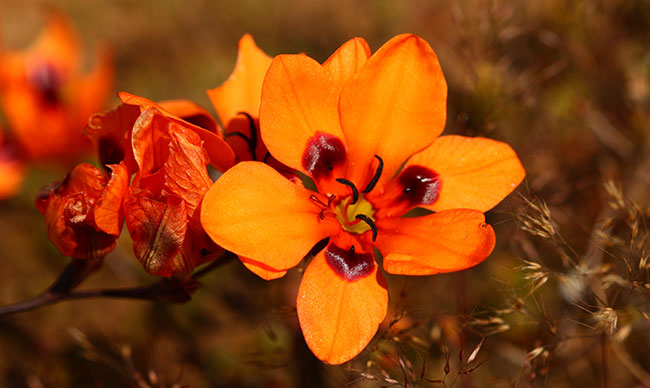 The spectacular blooms of this species emerge late in the season when little else in Overberg Renosterveld is in bloom. It grows predominantly on granite and clay slopes in Renosterveld vegetation and occasionally on limestone geology, with a distribution from the Cape Peninsula eastwards to Riversdale. Flowering takes place from September to October. 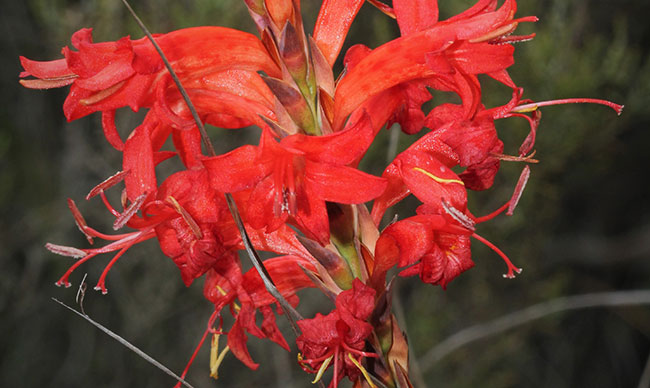 The tall bright red blooms of this geophyte are hard to miss in the Renosterveld during late spring and early summer. Tritoniopsis antholyza is a member of the Iridaceae family and is also known as the bergpypie, karklaar, karklaarblom or rooipypie in Afrikaans. It has a wide distribution from the Bokkeveld Mountains southwards to the Cape Peninsula and eastwards to Port Elizabeth where it is found on rocky slopes. Flowering takes place from October to April.