You are here: Home / Renosterveld News / Joining forces: A new partnership with the Overberg Crane Group

The Blue Crane, also known as the Stanley Crane or Paradise Crane, is South Africa’s national bird. It is one of the most beautiful, spectacular and charismatic birds I have ever had privilege to see. Once seen, never to be forgotten. The Blue Crane is blue-grey in colour, about 120cm in height with a wingspan of up to two metres. Blue Cranes breed just once a year, rearing no more than three chicks per clutch of eggs (although in the Overberg broods are usually one or two chicks).  They mate for life, and are known for their unusual courtship dance which involves bowing, jumping with wings extended, running in circles and tossing objects into the air.

Blue Cranes are the world’s most range-restricted crane and are near-endemic to South Africa. There are small populations of birds in northern Namibia and western Swaziland, with vagrants occasionally visiting Botswana and Lesotho. There have also been a few unconfirmed sightings in Zimbabwe. The total population count for this bird is currently sitting at around 25,000. Sadly the number of Blue Cranes has decreased by half since the 1970s. They are therefore classified as ‘Vulnerable’ on the IUCN Red List. Threats include habitat loss, mortalities from collisions with power lines and poisoning (most commonly accidental through misuse of agrochemicals).

The Overberg Lowlands Conservation Trust (OLCT) and the Overberg Crane Group (OCG) have formed a new partnership. The Overberg is home to about 50% of the world population of Blue Cranes, so it is critical that the region is the focus of conservation efforts. The OCG was founded in 1991 with the aim of improving conservation of Blue Cranes, but since then their mandate has expanded to protect other large and threatened birds that occur in the area, including the Western Cape’s only population of Cape Vultures, found at Potberg in De Hoop Nature Reserve, as well as Denham’s Bustards, Secretarybirds, Korhaans, Black Harriers and other raptors of conservation concern. 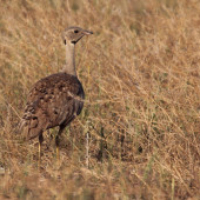 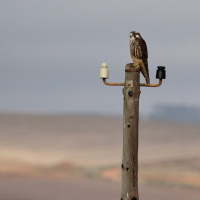 Renosterveld vegetation is an important habitat for many of these birds, and acknowledgement of this is one of the main driving forces behind the new partnership. Almost all of this vital habitat is on private land in the Overberg, so therefore extension work with landowners is one of the most important conservation tools. The OCG will be working with the OLCT’s Watercourse Restoration Project Manager, Keir Lynch. Important data will be collected through this partnership on bird movements, population dynamics, power line mortalities and breeding success. Extension support through Keir’s position will also be used to mitigate human-wildlife conflict through supporting landowners in the region when cases of conflict occur, as well as to raise awareness among landowners about the importance of conserving these species.

As part of this partnership a new website alongside social media presence will be used in order to encourage birdwatchers to participate in conservation monitoring, including reporting sightings of ringed birds and any that are dead or injured. This valuable data will be used to build a better picture of the conservation status of some of the Overberg’s most beautiful and charismatic birds.

The Overberg Lowlands Conservation Trust would like to thank the WWF Nedbank Green Trust for supporting this work through the OLCT Watercourse Restoration Project.