You are here: Home / Renosterveld News / Piece by Piece: Impacts of Fragmentation in Overberg Renosterveld

The Renosterveld of South Africa’s Overberg, located at the tip of the African continent, once formed a contiguous swathe of veld across the region. There was a plethora of game roaming the area including Buffalo, Black Rhino, Quagga and Hippo. Termite feeding specialists such as Aardwolf and Aardvark foraged the anthills and Renosterveld raptors including Secretarybirds, Marsh Harriers, Black harriers and Cape Vultures soared high above. The Khoe people undertook nomadic pastoral farming methods, moving all the time through the landscape thus ensuring no one area was overexploited.

Following arrival of the first European settlers, things began to change. Hunting of large game became commonplace, eventually leading to local extinctions. The Bluebuck and Quagga paid the ultimate price and following their complete extinction they are now known only from paintings and illustrations. The Bontebok almost became extinct too by the 1800s, but conservation efforts by several families from the Bredasdorp area brought them back from the brink. Over the last 100 years, livestock farming practices became more sedentary, more and more Renosterveld was ploughed up for agriculture and fences divided what was once open plains.

Today the Overberg Rûens is an agricultural landscape, with just 5% of the former extent of Overberg Renosterveld remaining. The majority of Renosterveld occurs in small fragments with the largest area remaining just 500 ha in size.

Most fragments are far smaller than that, surviving only because they are too steep or too rocky to plough. The ever increasing size of industrial farm machinery has lead to even those small fragments being bulldozed from the landscape. Edge effects from herbicide and other agricultural chemicals further diminish the extent of these small patches within agricultural land. Many of these small fragments of veld are further degraded by overgrazing from livestock not adapted to graze Renosterveld. 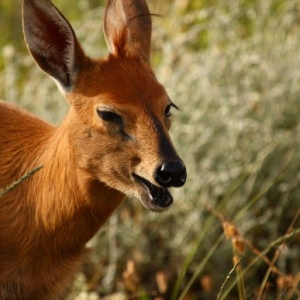 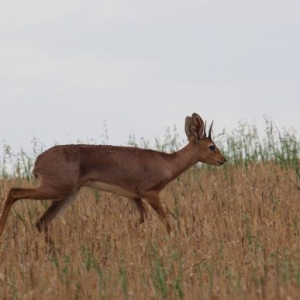 So what are the effects of these changes on our precious renosterveld wildlife?

The big game are long gone and many of the smaller predators such as the Bat-Eared Fox and Cape Fox are declining in number across the Overberg. Research has shown that rodent diversity is decreased in smaller fragments of veld and the effects of these changes cascade up the food chain. Habitat loss and fragmentation has also contributed to reduced food availability to Aardvark and Aardwolf, the latter being further persecuted by some farmers who incorrectly believe this termite-eating specialist to be a threat to livestock. Black Harriers are now Red Listed as Endangered, only being able to breed in the few larger fragments of Renosterveld that now remain.

So can we halt this downward spiral?

Should we focus our attention on only the larger fragments that are relatively ecologically intact? How do we help pollinators and other wildlife to move through agricultural landscapes? Research has shown that, on average, smaller fragments of Renosterveld are no less biodiverse than the larger ones. The total remaining % of Overberg Renosterveld falls far below national conservation targets so all Renosterveld that remains is important and no one area of veld is a lesser conservation priority than the next. The Overberg Renosterveld Conservation Trust’s innovative Easement Programme facilitates conservation in perpetuity of Renosterveld on private farmland, over time significantly increasing the % of Renosterveld under conservation. In addition, the programme helps to restore and conserve watercourses and riparian buffer zones that act as vital corridors through the landscape. Thanks to the work of the ORCT, their partners and funders, what remains of this imperilled and highly biodiverse ecosystem has a chance at survival.

We would like to thank all our donors, funders and partners including WWF and the Table Mountain Fund for making this work possible. If you would like to contribute to the Overberg Renosterveld Conservation Trust’s vital conservation work, please consider lending your support.