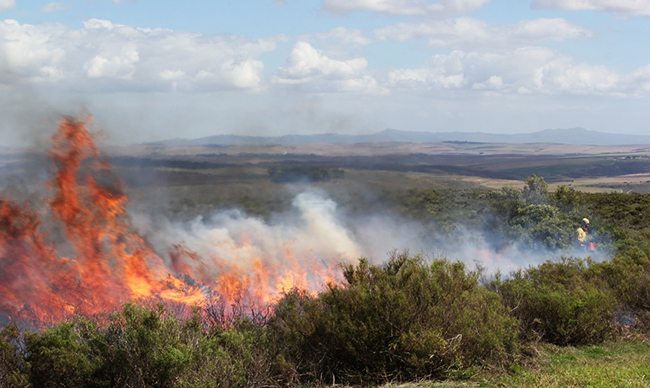 The Renosterveld vegetation of South Africa’s Overberg Region (also known as South Coast Renosterveld) forms part of the Fynbos Biome, which (with exception of its constituent forest patches) comprises a suite of both fire prone and fire dependent vegetation types. The ecological role of fire in fynbos vegetation that comprises the majority of the biome has been well studied and a plethora of scientific papers, books and other literature has been published on the topic.

In comparison, research into fire ecology in Renosterveld is still in its infancy. However, studies have shown that fire plays an important role in this Critically Endangered vegetation type as in the case with fynbos. Historically there would have been regular natural disturbance to Overberg Renosterveld provided by large herds of grazing herbivores such as antelope as well as regular veld fires moving through the landscape. Now just 4% of the former extent of Overberg Renosterveld remains in a matrix of tiny fragments, predominantly where the land is too steep or rocky to plough. The large herds of game are gone and replaced by fenced domestic livestock. Fire can no longer move unimpeded through the landscape and many patches of Renosterveld become senescent (with a handful of species dominating and a significant decline in species diversity) after a long term absence of fire. Senescence is the process whereby a vegetation (or biological life form) loses its ecological ability to function effectively with age.

This fragmentation has meant that the Renosterveld of the Overberg needs a little help and active management interventions to mimic natural disturbance to maintain its extraordinary ecological heterogeneity and species diversity, which makes it one of the world’s most species diverse Mediterranean type shrublands. To this end the Overberg Renosterveld Conservation Trust, in collaboration with willing landowners and Working on Fire teams from both CapeNature and the Greater Overberg Fire Protection Association (GOFPA), have effected a number of highly successful control burns in old and senescent areas of Renosterveld. Last autumn it was the turn of Haarwegskloof Renosterveld Reserve, owned by WWF and managed by the Trust in the Overberg’s Eastern Rûens.

A total of thirty hectares was burnt and the Trust staff waited and visited regularly to see what would emerge from the ashes. Prior to the burn, long term monitoring plots were set up by the ORCT so that data could be collected to inform future management planning and form an important contribution to the small but growing literature on the ecological role of fire in Renosterveld vegetation. All data collected by the ORCT is fed back to CREW and the South African National Biodiversity Institute for future use by scientists and other biodiversity practitioners.

The control burn at Haarwegskloof has been, like the other control burns initiated by the Trust, highly successful. The burnt area has been a treat to visit, with a plethora of beautiful bulbs, for which Renosterveld is famous, emerging during spring. After fire in Renosterveld the number of flowering geophytes increase significantly in number, producing a spectacular display which many visitors to the reserve have enjoyed this spring. There has also been extensive recruitment of reseeding shrubs, which prior to the burn had become old and senescent. The resprouting species are growing well. The successful recruitment of reseeding species shows that the burn was at the right temperature to ensure seed break seed dormancy, encouraged recruitment and successful regeneration of the veld, which will grow to maturity in the coming years until the time to burn returns again in the natural fire cycle of Renosterveld.