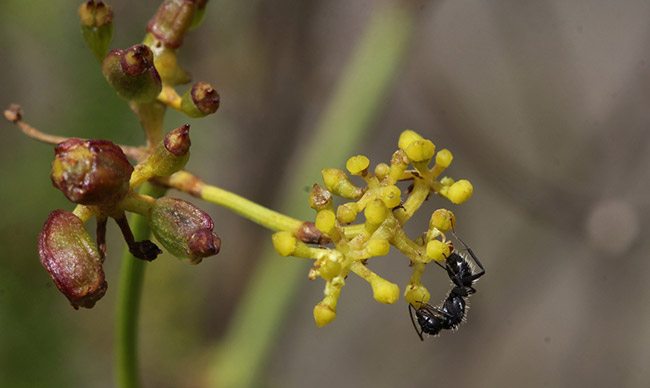 The Fynbos vegetation of the Cape Floristic Region is world famous for its botanical diversity and vast plethora of beautiful plant species. Visitors come from all over the globe to visit it. However, in contrast Renosterveld vegetation, which is also a constituent of the Fynbos Biome, has often been overlooked and can be the poor sister vegetation of the Fynbos. It has been relatively neglected by researchers so little is known about its ecology.

The majority of Renosterveld fragments in the Overberg are on private land, so many have gone unexplored. This has become highly apparent when new species are discovered. Since the Overberg Renosterveld Conservation Trust (ORCT) was founded, thanks to the work of the Trust and its associate researchers, a number of plants new to science have been discovered and described from Overberg Renosterveld. This is of great importance for conservation of this Critically Endangered vegetation type: If we don’t know what we have and where it occurs, how can we begin to conserve it to the best of our ability?

The latest of these new species is Notobubon striatum, recently published in the journal Phytotaxa, authored by Dr. Anthony Magee (South African National Biodiversity Institute), Dr. Odette Curtis (Director of the ORCT and Research Associate of the University of Cape Town) and Professor Ben-Erik Van Wyk (University of Johannesburg). The genus Notobubon was recently separated from the taxonomically problematic genus Peucedanum, also home to the well-known Blister Bush, cursed by many a hiker after a too-close encounter.

Extensive field surveys undertaken in both Eastern and Central Rûens Shale Renosterveld revealed that what had formerly been named Notobubon striatum was in fact two different species. After closer examination of the type specimens it then became clear that names already existed for both of these species. The lesser known plant, described in this new paper as Notobubon striatum, is a shrub that is about one metre in height, with a strong and distinctive aniseed or liquorice-like scent. It occurs along the banks of seasonal watercourses in Eastern and Central Rûens Shale Renosterveld.

The majority of the herbarium material corresponds with that previously described as Dregea collina. This taxon has now been accommodated through a name change, now being known as Notobubon collinum. This species is restricted to quartz and silcrete outcrops within Eastern Rûens Shale Renosterveld from Bredasdorp to Albertinia. The paper presents an updated key for both of these species. This species has a Near Threatened status on the Red List of South African Plants.

Thus far Notobubon striatum has been located on six different farms within Eastern and Central Rûens Shale Renosterveld, despite extensive field surveys in the area. It has been proposed that its Red List status should be Endangered as a result of threats from the limited number of localities, habitat mismanagement, overgrazing and herbicide drift. Ongoing population monitoring is required to ensure that this already threatened species does not slip closer to extinction.