You are here: Home / Renosterveld News / An abundance of conservation awards

The first recognition came during the launch celebrations of the Renosterveld Research & Visitors Centre earlier this year, when the Botanical Society of South Africa (BotSoc) awarded Odette the BotSoc Flora Conservation Medal in honour of her significant contributions towards the conservation of Renosterveld. 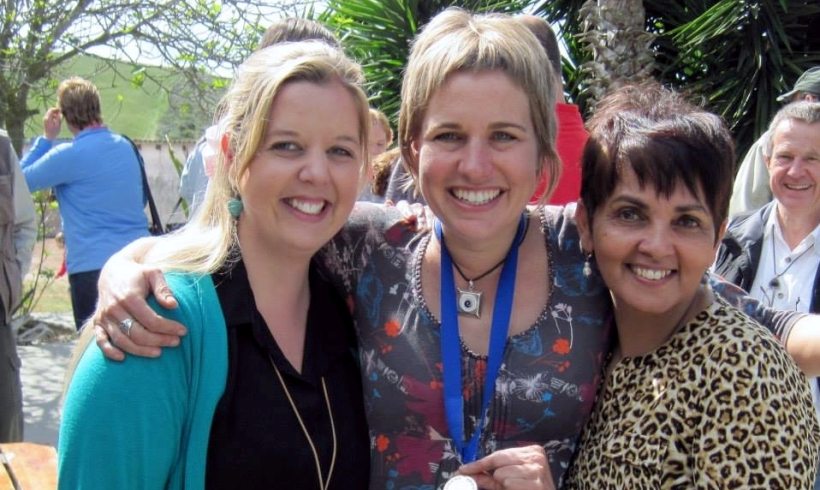 Zaitoon Rabaney (Executive Director of BotSoc – on the right in the photo above) then said “when we have the people, the passion, and the partnerships this is what happens, just magic”. And magic happened again for Renosterveld this week.

In front of most of the Fynbos conservation community, the CAPE Fynbos Conservation Award 2014 was presented to Odette for her passion, dedication and innovation approach towards the conservation of critically endangered biodiversity.

The main purpose of the CAPE awards is to recognise an individual’s outstanding contribution or achievement amongst their peers in the broad biodiversity conservation community and working towards the goal of conserving the biodiversity of the Cape Floristic Region, utilising it sustainably and managing it effectively, while at the same time delivering significant benefits to the people of the region in a way that is embraced by local communities, endorsed by government and recognised internationally.

Two more CAPE awards were presented by Marilyn Martin-Vermaak of SANBI to Matthew Norval (Conservation Programme Director of the Wilderness Foundation – on the left in photo below) for his dedication and innovative contributions towards conservation and to Eugene Marinus (Curator at SANBI – on the right in the photo below) for his dedicated contributions to transformation and capacity development in the sector.

It is a great honour for the Overberg Lowlands Conservation Trust and huge tribute to Odette, who has invested her life and soul in the conservation of Renosterveld over the past few years, to be recognised through these two prestigious accolades. Congratulations Dr Curtis – which award next?

Black Harriers are telling us their story – via satellite