We still actually know so little about how Renosterveld is pollinated. But one interaction – between flower and bird – has provided some answers to how one Renosterveld species reproduces.

It’s an interaction we’ve also witnessed (and photographed): that of the pretty Microloma sagittatum being pollinated by sunbirds.

But for many years, scientists believed the Microloma, like all other milkweed flowers, was pollinated by insects. That was until botanist Anton Pauw spent weeks visiting remote sites along the West Coast where the sagittatum was flowering, and saw how sunbirds visited the bright pink-red flowers.

While studying the interaction, he made a phenomenal discovery: the birds carried the pollen on their tongues from flower to flower. This was believed to be the first recording of pollen transfer on the tongues of birds (in other cases where birds pollinate flowers, the pollen is transferred on their feathers). 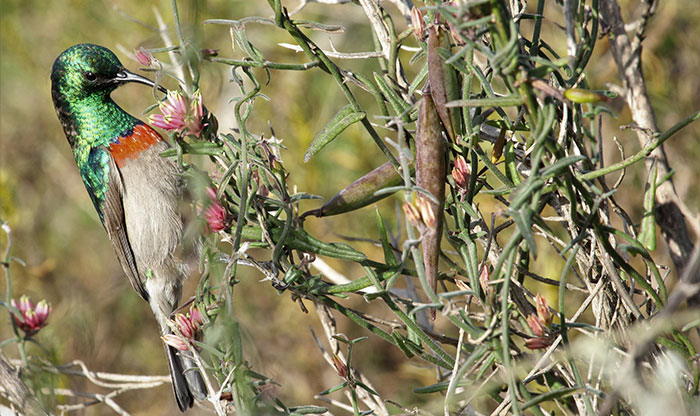 Here’s how this pollination happens:

The sunbird puts the sharp tip of its bill into the tips of the colourful Microloma sagittatum. It reaches for the nectar in the flower with its tongue. During this action, the pollen also attaches to the tip of the bird’s tongue, sticking to the section of the tongue which has ‘frayed’ edges.

The bird then flits off to visit the next flower, where the pollen is transferred to an intricate mechanism in the flower designed to receive the pollen.

Even though scientists first assumed insects were responsible for pollination, there were a number of signs which indicated that this might not be the case:

This relatively ‘new’ discovery of the role birds play in pollination (this discovery was made in the late 1990s) shows how little we actually know of plant pollination. It’s relatively easy to see and study how birds pollinate plants. It’s considerably harder to see how plants are pollinated by insects, whose visits to plants go undetected. 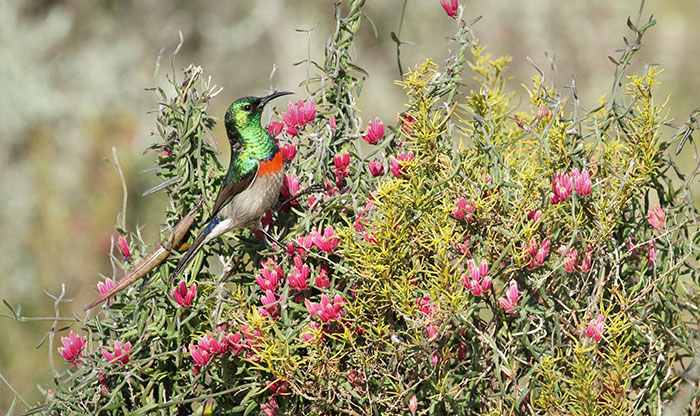 We need to understand more: how plants are pollinated by insects, especially in a fragmented landscape such as the Renosterveld of the Overberg.

This will also help us better understand how we can help stop the extinction spiral.

The ORCT has worked closely with a number of students and tertiary institutions on different aspects of pollination in the past. We’re now hoping to build on this research, and grow it into a pollination research programme within the Trust.

More on some of the exciting pollination studies that have taken place here.